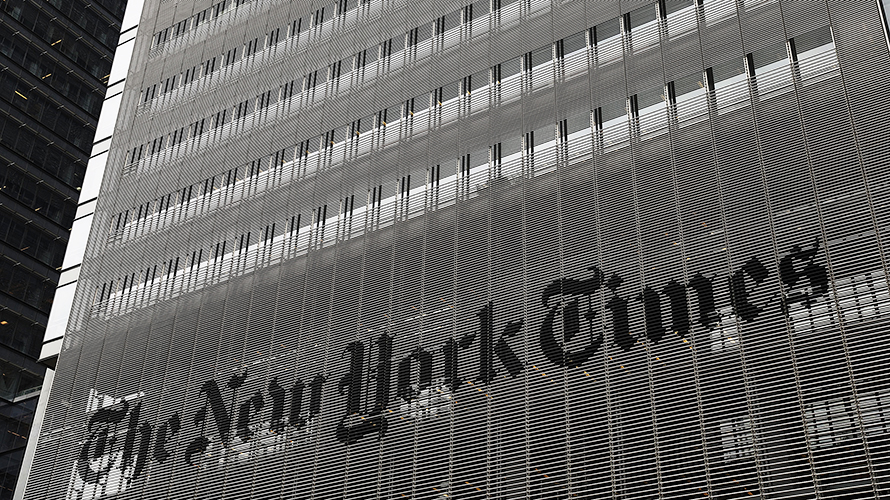 The New York Times’ president and CEO, Mark Thompson, was among the first U.S. media executives to publicly state how Covid-19 would affect the publisher’s ad revenue when he said the business was seeing a “slowdown in international and domestic ad bookings.” That was in early March, even before Covid-19 was declared a pandemic. Thompson anticipated a 10% decrease in digital ad revenue in the first quarter.

In this morning’s earnings report, however, the figure is actually just shy of 8%, but print advertising was down 20.9% in Q1, leaving a year-over-year net ad revenue decrease of 15.2%.

“The Times’ business model, with its growing focus on digital subscription growth and diminishing reliance on advertising, is very well positioned to ride out this storm and thrive in a post-pandemic world,” Thompson said in a statement. Advertising in the second quarter is projected to fall between 50% and 55% compared to last year, he added, with “limited visibility beyond that.”

Ad forecasts for this year, particularly for print, are grim. Print media is now expected to see a 25% decrease in advertising sales, compared to the previously expected 17% loss. Digital media ad sales are expected to grow just 4%, according to the most recent study released at the end of March by IPG Mediabrands-owned Magna Global.

Thompson said the decrease in ad dollars would put “pressure” on revenue over time, and would likely lead to job losses in the coming months, but that cuts wouldn’t be made in roles “in journalism” and those “that would impact the core growth strategy.” Overall, he said he expected the head count to grow by the end of this year.

As most businesses see a financial impact due to Covid-19, their marketing budgets have also adjusted, with entire categories like luxury brands as well as travel and hospitality companies tightening their spends. The Times, just like other media organizations, has worked with advertisers to squeeze as much as they can out of those relationships as the business continues to navigate a period in which holding in-person events—a way media organizations have diversified revenue streams as of late—is impossible.

The Times, like other publishers, has seen an uptick in traffic to its coronavirus coverage. Also like other publishers, the Times has made a substantial amount of that coverage (including a live blog) available for free. It’s a way for the media organization to put its journalism front and center for a potentially new audience, said Paul Hardart, clinical professor of marketing at NYU Stern School of Business.

“How far do they lower the paywall to provide a public service, but also recognize they’re a business and they need to get customers that last a long time?” Hardart asked.

But the Times’ coverage has resulted in 587,000 net new digital subscriptions, which amounts to the highest number of net new subscriptions in a single quarter, Thompson said. Of those subscriptions, 468,000 were to the news product and 119,000 were for other digital products.

“The revenue from those subscriptions—and our strong balance sheet—give us real confidence, not just that we can remain financially sound through the pandemic, but also that we can safely invest in our digital growth strategy and continue to hire new talent to help execute it,” Thompson said.

Amid Covid-19, the Times has gotten creative with reaching new audiences and tweaked its coverage to better fit the current moment, with much of the nation has been under stay-at-home orders, such as launching a live blog with continuous updates and a renewed commitment to service journalism, focusing on pieces that give advice on how to live through a pandemic.

Covid-19 will put a continued emphasis on subscription growth at all media organizations, an area the Times has already been investing in with a widespread brand marketing campaign titled “The Truth Is Worth It.” The most recent spot in the award-winning campaign dropped during the Oscars and featured Janelle Monáe, putting a spotlight on The 1619 Project, a New York Times Magazine series about the history of African Americans in the U.S. The project, and its reporter Nikole Hannah-Jones, earned the Times one of its three Pulitzer Prizes this year.

The Times had previously said 2019 was a record-setter for digital subscriptions after creating its digital paywall in 2009. In Q4 of last year, the publisher reported revenue of $508.4 million, largely due to a 4.5% increase in subscription revenue with a total of 5.3 million total print and digital subscribers as of the end of the year. While the Times did see an uptick in subscribers during this period, the publisher reported a decline in advertising levels of 10.5% year-over-year compared to 2018.

Facing changing consumer privacy laws and the ever-present need to compete for ad dollars with search and social companies, the Times planned on emphasizing its first party data in ad products this year.