Thanksgiving Dinner Crisis? This Year, Alexa and Butterball Can Help

The long-running turkey advice hotline has a new skill 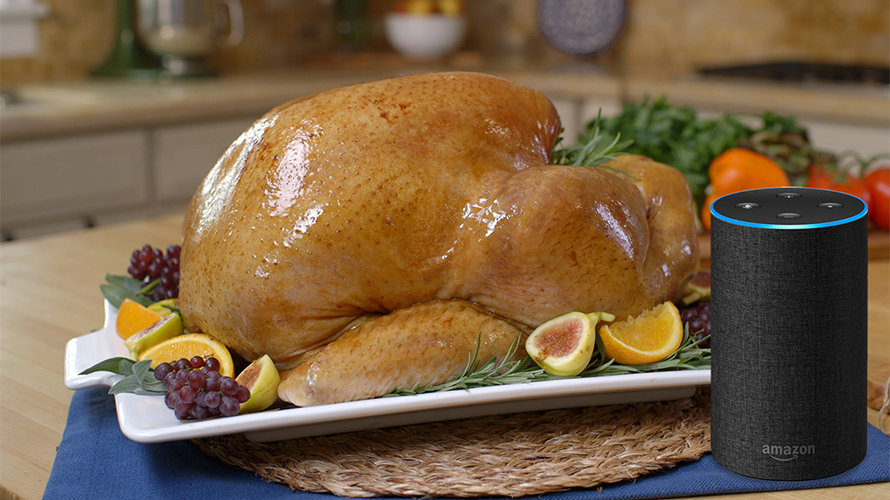 Butterball, which says it is the largest producer of turkey products in the U.S, is bringing its 38-year-old 1-800-Butterball turkey hotline to Amazon devices for hands-free support for home cooks this holiday season.

Per Rebecca Welch, senior brand manager at Butterball, the brand included the most frequently asked questions on the Turkey Talk Line, such as how to thaw a turkey, how to roast a turkey, how much turkey to buy and how long to cook a turkey, as well as tangential questions like how to use stuffing versus dressing.

Echo devices respond with wisdom in the voice of real-life turkey experts from the Talk Line except in cases when a response requires a calculation, like how many pounds of turkey a cook will need.

Nicole Johnson of the Turkey Talk Line said thawing in particular is where calls get interesting—she has had callers defrosting turkeys in the bathtub with their kids, as well as in the dishwasher, swimming pool and jacuzzi.

“And now that we have this texting feature, we get pictures sometimes,” she added.

Butterball, which is named after the “broad breast and plump, round shape of the turkey,” has indeed diversified from its original advice hotline, which started in 1981 when six female home economists answered 11,000 turkey questions. That’s about 1,800 a person. Not bad.

Butterball has since added turkey experts who speak Spanish—and even a few who aren’t female. (The 50-member team has a 9:1 female/male ratio.) It has also expanded to new channels, including text, email, chat, Facebook, Twitter and Instagram.

The Talk Line is open from Nov. 1 to Dec. 24. And if one professionally trained turkey expert doesn’t know the answer to a caller’s question, Johnson said she or he can always put the caller on hold and ask a neighboring expert within the Illinois call center where they’re based. (There are also two women working remotely who answer emails.)

“The wealth of knowledge in that room is amazing,” Johnson said. “It’s a really well-trained room.”

Johnson—a 17-year veteran who postponed her honeymoon in order to participate her first year—said the average tenure of a Turkey Talk Line expert is 15 years. The first three years, newbies have to go through Butterball University, an eight-hour program in a test kitchen run by supervisors with more than 30 years of Talk Line experience. Each of the so-called freshmen is assigned a different way to prepare a turkey.

“We usually cover 10 different ways to cook the whole turkey—the traditional open pan method, we show them how to grill a turkey, we show them how to deep fry a turkey, we use crock pots, microwaves,” Johnson said. “You don’t realize it until you’re working on Thanksgiving and get a caller whose oven is not working and they’re in a panic. That’s when we’re there to help them host like a boss.”

And, upon your fourth year, you are considered to have “graduated from Butterball U,” Johnson added.

These turkey experts spend Thanksgiving together, eating turkey all week—including turkey chili and turkey sandwiches—but the tradition is to eat soup on Thanksgiving Day.

“Eighteen-plus years ago, there was only one way to reach us—phone—so we were talking from start to finish and your voice could get very hoarse,” she added. Now when that happens, you can take a break by answering texts, chats or interacting on social.

According to Welch, one out of every three turkeys sold for Thanksgiving is from Butterball. The National Turkey Federation estimates 44 million turkeys were sold in 2017, which would work out to about 15 million Butterball turkeys.

“We want to evolve the Butterball line to reach consumers and holiday cooks wherever and however want to get help—we felt this was a great way to bring the Turkey Talk Line into the kitchen while they’re cooking a holiday meal and to be able to help them in a hands-free way whenever they have a question and need answers,” Welch said.