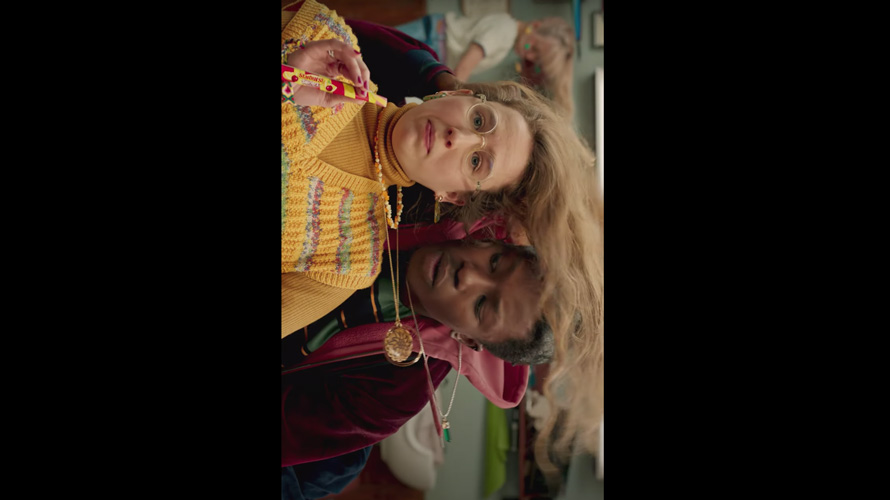 Do not adjust: The new campaign for Starburst Swirlers is meant to be viewed vertically.
Starburst
Share
By Paul Hiebert
|
July 7, 2020
Share

Starburst has a new product that deviates from its familiar cube-like shape. Called Starburst Swirlers Chewy Sticks, the long, rope candy comes in two-in-one flavors such as cherry-lemon, strawberry-orange and cherry-strawberry.

To promote the new product, the Mars Wrigley brand decided to mirror the product in Starburst’s first vertical-only ad campaign designed for viewing on smartphones.

“We recognize that the proliferation of mobile has changed nearly everything about our daily lives,” said Ronald Harrison, senior associate brand manager at Starburst. “Most notably is how we’ve started to consume our world vertically—everything from books to videos to pictures to ads.”

Titled “Best Enjoyed Vertically,” the campaign from DDB Chicago features people in a hair salon doing their best to chew on Starburst Swirlers while existing in a landscape that’s been rotated 90 degrees.

As seen in behind-the-scenes footage of the “Best Enjoyed Vertically” campaign, the crew created a hair salon, then flipped the whole set on its side, strapping actors into chairs. Not all candy tosses went as smoothly as shown in the final version.

Starburst Swirlers came about after the company reviewed data showing that demand for both two-in-one flavor combinations and fruity confectionary in the rope-stick category is growing, according to Harrison.

In recent years, Starburst has also expanded its product line with Starburst minis and Starburst gummies. Both versions have sold well, said Harrison.

With a decline in foot traffic to convenience stores during the pandemic, where shoppers can impulse buy Starburst while waiting in line for the cash register, the brand has put an emphasis on ecommerce. One click on each campaign spot hosted on social media leads viewers straight to a platform like Amazon or Walmart.com where they can buy a pack of Starburst Swirlers.

“We never want to walk away from the support that we have for our traditional brick-and-mortar retailers,” said Harrison. “But we also—especially with this campaign, being that it is digitally focused—wanted to make sure that the path to purchase is really simple for consumers.”

In an attempt to replicate impulse shopping online even prior to the Covid-19 outbreak, Mars Wrigley has been pairing ads with content tied to special occasions and rituals, such as baking during the holidays, and working to ensure its brands appear early in various retail platforms’ search results.

“Product placement is critical,” TJ Kanaris, head of seasonal marketing at Mars Wrigley, told Adweek in December. “In a lot of respects, if you’re not on the first page of a retailer’s digital site, you’re likely not to get purchased.”

In the U.S., online confectionery retail sales grew from $715 million in 2017 to $1.19 billion in 2019, according to figures from market research firm Euromonitor International.