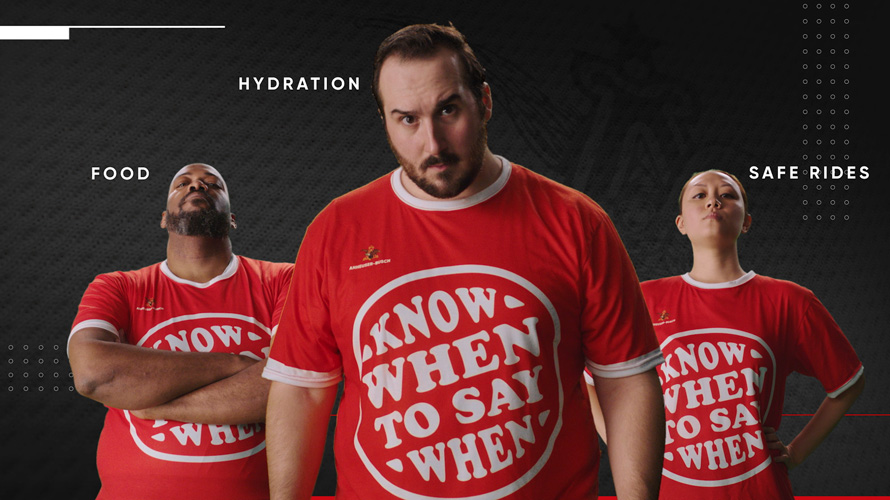 The 'Know When to Say When' slogan was first introduced in 1982. Anheuser-Busch

In a lighthearted new spot that harks back to one of the first responsible drinking ads by a major alcohol brand, Anheuser-Busch is celebrating service industry workers who take their jobs a step further by helping keep patrons safe.

The minute-long ad opens with a bar manager explaining that while she’s asking a lot of her bartenders as the establishment prepares to reopen, they’re taking it really seriously. Maybe too seriously.

Then, a deep-voiced sports announcer introduces those bartenders as “Know When to Say When” all-stars in the style of an NFL broadcast. One’s in charge of encouraging hydration, another ensures patrons get a safe ride home and the third makes sure folks are eating some food alongside their alcoholic beverages.

In line with social distancing recommendations, the bartenders and patrons in the spot are all wearing masks when they’re around other people, and there appears to be six feet of space between people in the same shot.

“Our original ‘Know When to Say When’ campaign was one of our first holistic campaigns promoting responsible drinking behaviors,” said Adam Warrington, Anheuser-Busch’s vp of corporate responsibility. “The message is simple, applicable and rings true even in today’s new normal.”

What it boils down to is simply encouraging those who drink to do so in moderation, Warrington also said.

The sports-themed spot with tips on how to imbibe safely is a significant evolution from the brand’s original PSA-style ads. The tagline was first used in 1982, and throughout the ’80s, the campaign featured the brand’s master brewer, celebrities like Patrick Ewing, Dan Marino and Bud Light’s spokesdog Spud Mackenzie who gave a straightforward reminder to viewers: Know when to say when.

To mark the tagline’s 30th anniversary in 2012, Anheuser-Busch revived the campaign with an accompanying website. Now, as bars are reopening after months of lockdown, the brand is bringing it back.

“The on-premise environment has shifted dramatically over the past six months,” said Warrington. “We felt this was an important moment to celebrate our bartenders and restaurant workers who are going above and beyond to keep their businesses and customers safe.”