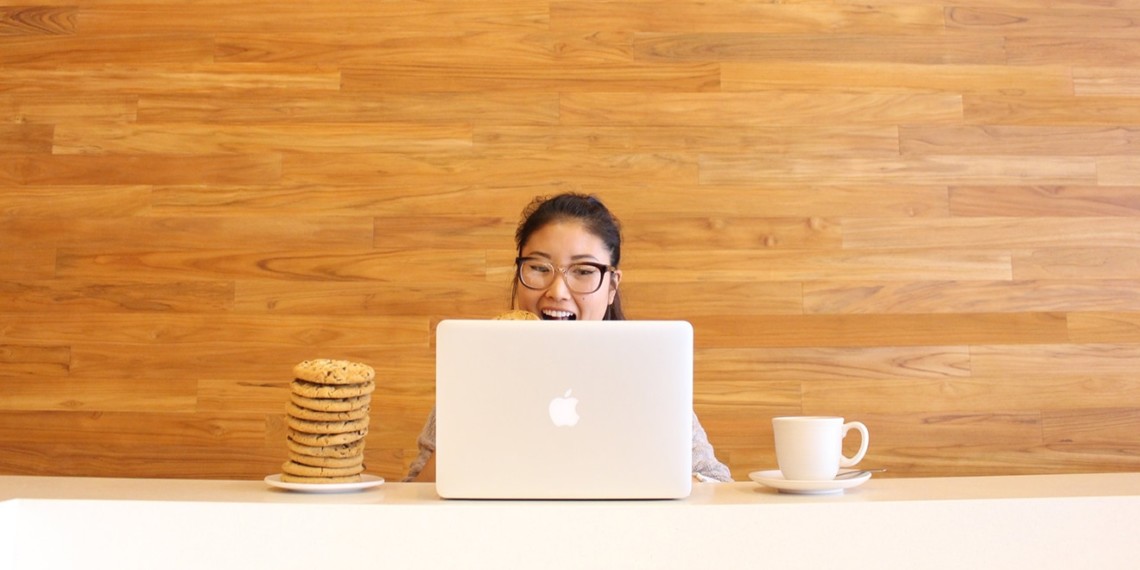 Is there any place harder to get noticed than in a top-tier recruiter’s inbox?

Often the secret is to sidestep the inbox altogether, but sometimes a job-hunting strategy that’s too far afield can seem gimmicky to the point where it overshadows your actual workplace talents.

She’s been sending “Penny Pokes” to recruiters and creative directors via payment app Venmo, which allows you to send messages to users—if you send them some money too. You also have to guess the right user name for the right person.

Recipients get a Venmo notification that they’ve received one cent from Chweh, along with a note linking to her Penny Poke landing page. 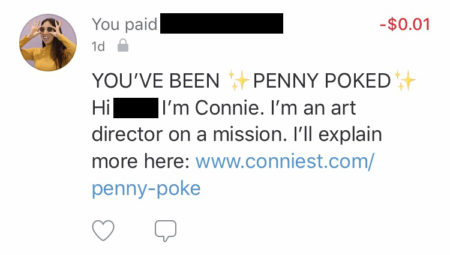 So far, she says she’s heard back from recruiters or creative directors at nine of the 16 New York agencies she’s targeted. That’s a 56% rate, not counting the dozens of anonymous clicks she’s gotten to her landing page.

We caught up with Chweh to learn more about her strategy, how it came about and how recruiters are responding:

About seven years ago, I received my first Penny Poke from a friend whom I hadn’t spoken to in a while. I thought it was such a cool and unique way to get in touch with a long lost friend, and it definitely planted a seed in my subconscious.

Last spring, I was really inspired by the virality of World Record Egg, so I attempted to launch a project called “The Longest Penny.” I wanted to see how far a digital penny could travel on Venmo. My thinking: If I sent a penny to a friend on Venmo and prompted them to send that penny to another friend and so on, perhaps we could create the longest penny in digital history! Mwahahaha!

“The Longest Penny” project flopped (the penny I sent only traveled to 2 degrees of separation), but I took away a few learnings:
• Penny Poking is an active phenomenon on Venmo.
• People are very skeptical on the platform since it’s a payment app.
• There is a 280 character limit for Venmo captions.
• You’re not able to copy/paste Venmo captions.
• But you are able to add tap-through URLs.

Since this past summer, I’ve been cold-emailing recruiters and creative directors in NY, and wow the response rate has been close to 0%. LOL. It was discouraging, of course, but it simultaneously motivated me to think of a more clever, fun way in.

And so came my “Penny Poke” idea: What if I Penny Poked recruiters and creative directors on Venmo to get their attention?

How did you decide whom to Penny Poke? How wide of a net did you cast?
I Penny Poked recruiters and creative directors from agencies that I want to work at. These are agencies that I admire for their ideas, craft, and/or reputation. But actually, I could only Penny Poke people with unique or somewhat unique names—i.e. not super common names, otherwise I would get a plethora or results for names like “John Smith.”

I cast a pretty wide net since I wasn’t sure how people would respond to the gesture; I think it’s a love it or hate it kinda idea. Plus, not everyone has their notifications turned on for Venmo. In total, I’ve Penny-Poked 42 people— one of those people being David Droga—got to go big! Hopefully, that was actually him and not some other David Droga.