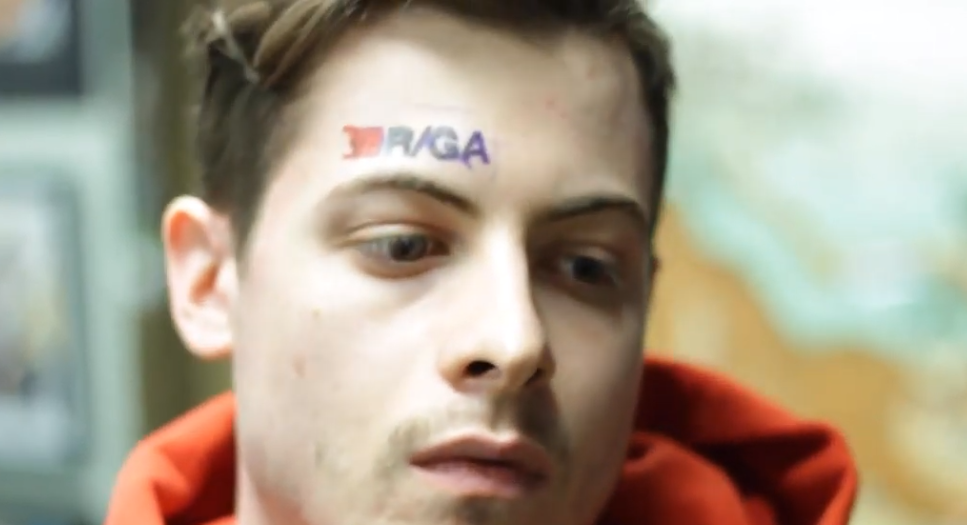 Has the agency world truly become more corporate, losing a bit of the color and personality that made it the place we all know and love/hate?

We’re not quite sure, because it’s still filled with people willing to do crazy things for love and money.

This March, our blog introduced everybody to junior art director Rudolph Troncone (portfolio here), who really wanted an internship at R/GA. One had to admire his chutzpah and single-minded devotion—not only did he know he wanted to work at R/GA and only R/GA, but he went to extraordinary lengths to get there by creating a video that appeared to depict himself getting the agency’s logo tattooed above his right eye.

Was it real? Of fucking course not.

But that wasn’t the point, was it? He got lots of attention, most of which did not seem to be negative. And most importantly, he scored the internship. You may ask why we chose to feature him again and to share a little bit more about the story. Honestly, it’s because people are still curious, and they asked.

Holy shit, @RudolphTroncone the tattoo kid actually did it. He made it into @RGA. Absolute Madman.https://t.co/SZ8ns0St8P pic.twitter.com/kwZpo9dHX6

So here’s the Q&A along with some more footage of the event itself.

AgencySpy:Why did you decide to do the face tattoo thing? Since you only applied to R/GA, so was it really all about impressing the recruiter?
Rudolph Troncone: An Associate Creative Director from R/GA reached out to me through LinkedIn and said he would like to submit my portfolio for the Summer Internship Program. I of course said do it. R/GA’s recruitment got back to me a couple of weeks later and said they were interested in moving forward with me as a candidate for the Art Director Intern position. They wanted a 2-minute video about who I was in 5 days. I knew I had to do something unconventional and something I could execute quickly on my own. The video was absolutely about impressing the recruiter and letting them know I was all in. Above all else, though, I wanted to create something that everyone at R/GA would internally talk about. I didn’t want to be lost in the sea of applicants.

What was your favorite response to the whole thing? And did the fact that they gave you the internship surprise you?
There were a lot of really great responses. It’s hard to choose. Chapin Clark tweeted about it a few times through the R/GA account. A twitter influencer from Texas had the guts to call me on my personal cell to ask if it was real. People from South America were friend requesting me on Facebook and messaging me to ask about it (thank god for Google translate). I knew the idea was going to get R/GA New York and people in the New York ad community talking, but it spread a lot further than expected. The video had over 45.1 k Vimeo Impressions in mid-April, and almost half the views were from outside the United States. There were multiple articles written in Portuguese, French, and Chinese. However, even with all that having been said, the fact that they gave me an internship did surprise me. At larger companies like R/GA, there are a lot of people making decisions on who they let in, and I honestly just had this one connection through LinkedIn.

Honest answer: Do you think the tattoo stunt played a key role in getting you the gig, or at least getting noticed?
The tattoo absolutely helped me get a role as an Art Director Intern at R/GA. Although my portfolio does show some conceptual thinking (something I’ve been working on), I think it is very design-based. I feel a lot of people in larger agencies, like R/GA, would be hesitant to give me a role as a more conceptual type Intern or Junior Art Director. I would like to think the video shows a different kind of thinking, and helps people understand I can come up with creative ideas and execute them effectively.

So you’re now an intern. How is that going so far?
It’s been an awesome experience, and everyone at R/GA has been incredibly welcoming. I have some brilliant mentors and a great copywriting partner who I love working with. I’ve been fortunate enough to work with some exceptional clients that include ESPN+ and more. I always felt larger places expected young creatives to be very specialized in one particular area. My perception was that juniors were supposed to stay in this one lane and hand it off to someone else that is specialized in another lane. I think the biggest thing I’ve learned is that isn’t always true. Although my role at R/GA is very concept-driven, I do feel like a swiss army knife a lot of the time. One day I’ll be working with my copywriter writing out ideas, the next day, I’ll be designing motion graphics, and the day after that it might be UX/UI design.

How long does the internship last, and what are your plans after that?
The internship ends on August 9th, and hopefully, it will lead to a full-time job at R/GA. I’ve wanted to work here for a long time as an Art Director. However, if things don’t work out, I’ve also been keeping my eyes open for other opportunities. If anyone is looking for a Junior Art Director, let me know.

What’s your main takeaway from the tattoo stunt, as a case study?
Real or not, people just liked to talk about it.

Ed. note: We love how the tattoo guy says, “If you put that shit on, you’re gonna be walking around with it for like, two weeks.”

How difficult was it to get rid of the tattoo?
I actually went into the tattoo parlor with a package of red and black sharpie markers. Having R/GA sharpied on my forehead seemed like a small price to pay for a jump start in my career. Maybe that alone really says something about the industry, I don’t know. Anyways, after being teased by the tattoo artist, he told me he had some washable markers that would do the trick instead. The markers he used made the tattoo look somewhat real. They probably would’ve worked even better if I wasn’t sweating so much. As a result, I ended up having to do a lot of CGI work on myself in post-production to get it just right. Later on, when I had more time, I ordered some custom temporary tattoos to wear into the interview. They were easy to get off, thankfully.