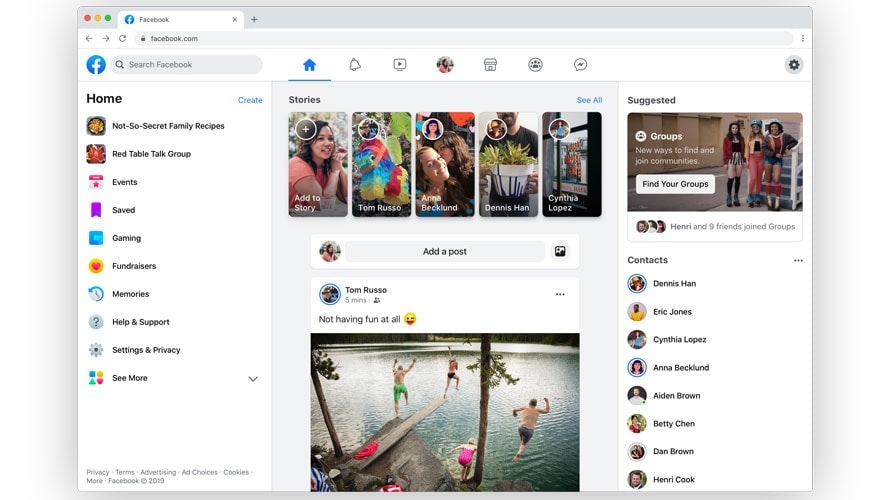 Amid all of the controversy Facebook had to deal with in 2019, the social network found time to release some fairly significant features and updates for its users, as well.

We narrowed down the list to the top 10, which ran the gamut from a complete redesign to a long-awaited privacy option for users to finding love and the news to remembering the departed.

No. 10: Tributes section for memorialized accounts

Facebook addressed the sad inevitability of death and how loved ones can deal with deceased users’ presence on the social network.

In February 2014, responding to user feedback, Facebook began leaving the privacy settings unchanged on memorialized accounts from what the deceased user had chosen.

One year later, the social network added legacy contacts, which enabled people to choose family members or friends to oversee their memorialized accounts if they passed away.

The next step came in April 2019, as Facebook added a Tributes section for memorialized accounts.

The Tributes section is separate from the departed user’s time line and is a place where friends and family can share posts.

Legacy contacts can moderate posts in the Tributes section, such as by changing tagging settings, removing tags and determining who can and cannot post or see posts.

“This helps them manage content that might be hard for friends and family to see if they’re not ready,” chief operating officer Sheryl Sandberg wrote in a Newsroom post at the time. No. 9: Watch Parties for live TV

The social network brought interactivity into the experience when it began testing its Watch Party feature in January 2018, enabling groups of people to simultaneously watch a video, comment on it and react to it.

Watch Party was extended to groups worldwide in July 2018 and to pages and profiles that November.

Live TV was added to the mix at South by Southwest 2019 in March, as the social network revealed it would begin testing Watch Parties for TV with live sports events, such as UEFA Champions League soccer matches.

Facebook said at the time that more than 12 million Watch Parties took place in groups between July 2018 and March 2019, generating eight times more comments than non-Watch Party videos in groups.

“While we’re testing this initially with sports, we can’t wait to bring it to all kinds of live events and cultural moments, from awards shows to highly anticipated show premieres and more,” the social network wrote in a blog post in March.

Facebook combined its role as the unofficial reminder of birthdays with its surging Stories format when it unveiled Birthday Stories in May.

Users can create Birthday Stories by tapping on a birthday notification from Facebook and then either shooting or uploading a photo or video, or using one of the social network’s birthday cards. Music stickers can be added as well. When completed, birthday wishes are added to that person’s Birthday Story. Facebook expanded its Today In local news and information feature to roughly 6,000 towns and smaller cities in the U.S. in September.

The social network began testing Today In in January 2018, and product manager Anthea Watson Strong said in September that 1.6 million people had opted to receive regular updates in their news feeds.

Today In, an initiative from the Facebook Journalism Project, provides local news and other information including community updates, recent news, group discussions and local events, and content included in the section comes from local publishers selected via algorithm and by the social network’s news partnership team.