What 8 Agency Execs Think About Twitter’s New Like Button

Spoiler: Not all of them heart the change 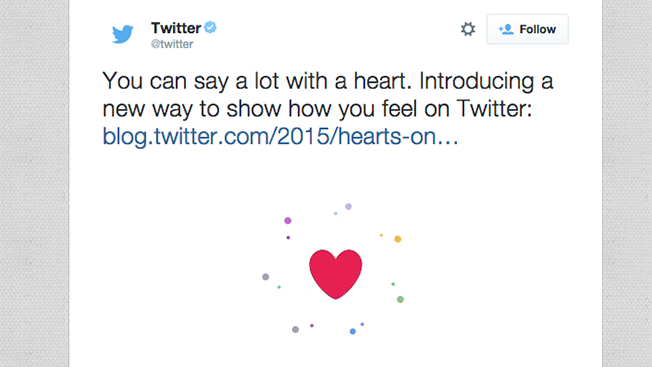 This week, Twitter tried increasing its emotional pull by ditching its star button in exchange for a heart, prompting users to "like" a post instead of the old "favorite" option.

But how much will users and brands really like the change? On one hand, according to a survey of Twitter users by analytics company UserTesting, 74 percent preferred the heart, 10 percent preferred the star and 16 percent had no preference. Although, several news stories have cropped up highlighting angry tweets about the change.

Reactions from marketers, on the other hand, seem to be more of a mixed bag.

Adweek asked eight agency executives about their initial impressions and predictions for Twitter's heart. Some found it to be a promising evolution for the platform, which in the third quarter of this year saw user growth stall. However, others were not impressed.

"This ladders up to the same question every Twitter user has been asking all year," said Victor Pineiro, vp of social media at Big Spaceship. "How far will they risk offending existing users to court a broader audience? And ultimately, will bending over backwards to gain a new audience alienate the core and dilute their product enough to make it little more than a smaller Facebook?"

Here's what the other seven execs said about the switch:

"'Favoriting' was a unique action in that it was seemingly less emotionally charged and more specific than 'liking' on Facebook…. In switching to 'likes,' Twitter is seemingly solving for an issue that didn't exist while failing to acknowledge the [user-experience] challenge that Facebook has attempted to solve with its new emoji set."

"I look at this as a move for Twitter to add more meaningful and emotional actions for marketers to measure content performance and to base targeting and optimization of paid media on. This is likely an interim step for a wider range of reactions users will be able to register on tweets."

"Because the heart sign is more instinctual to a human emotion, more people will likely press this as opposed to the star symbol. Although it seems like a tiny change, I do believe this is a good change since Twitter is trying to increase stickiness, which this will help. Twitter can be a lonely place for users when you tweet something and no one gives you a response or feedback—this will help. Lastly, let's not forget Twitter is an international platform, [and] the heart is simply more culturally ingrained across country lines than the star."

"Sure, it provides more consistency across social platforms, but it also waters down the meaning of the interaction. To be a 'favorite' implies much more of an endorsement than a simple like, which was actually kind of cool and unique about it. But if consumers are more willing to 'like' content than 'favorite,' it makes Twitter's engagement rates more appealing to marketers who place a lot of value in such metrics."

"Simple social media actions across all platforms are becoming more and more disposable to the point where they are almost meaningless. Instead of 'like-baiting,' we believe that brands need to give people something that they would want to share on their own. That is more valuable to people and more respectful of their time on social media platforms."

"Brands will likely get more 'likes' than they did 'favorites' because 'liking' something is a much lower barrier than making it your 'favorite,' especially when it comes to retweeting. However, this move by Twitter could create less retweets, which generates more reach for a brand. On the plus side, it may help with standardizing reporting across Facebook and Twitter as it will be 'like' for 'like.'

This will not be a game-changer for Twitter. Power users won't flee—they'll begrudgingly accept it or even change it back—because, yes, there are hacks for that—and it will make it easier for the indoctrinated to pick it up. This alone won't move the needle for Twitter."