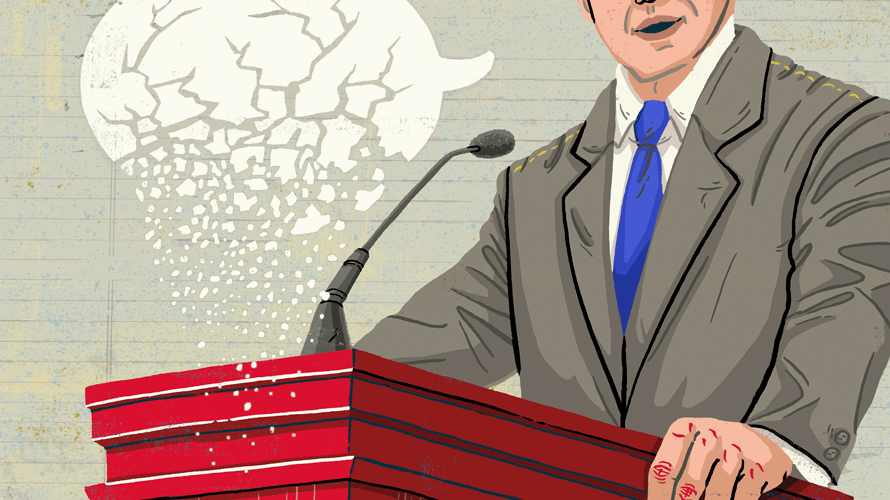 There needs to be a foundation of real news to build social media and political ads upon. Getty Images There’s been much speculation as to whether Facebook will follow Twitter and Google’s lead in restricting political ads. And, indeed, it feels like political advertising has tipped into particularly dangerous, manipulative territory hastened by microtargeting and real-time analytics.

But as many marketers have experienced, Facebook’s ad filters can be dangerously imprecise when labeling content “political.” A political ad ban would threaten to take away a powerful tool in the toolbox of not just campaigns, but advocacy organizations, nonprofits and purpose-driven marketers from across the spectrum.

Ultimately, here’s the thing: Facebook hasn’t altered the content of political advertising. Political ads have always been full of misleading claims, character smears and alternate partisan realities. They were just as toxic when they existed primarily on TV and in the mail.

As social feeds have become as central to our lives as the evening news once was, what’s needed is not the removal of political ads, but rather a foundation of real news.
What has changed is what surrounds political ads. Before social algorithms and cable news enabled us to create our own information echo chambers, political ads competed not just against one another but also shared space with largely unbiased, truth-based journalism in the form of the nightly news and strong, local newspapers.

In other words, fact-based journalism permeated our collective consciousness, whether we liked it or not. It was a shared lens through which our electorate was able to weigh and evaluate partisan claims. So, as social feeds have become as central to our lives as the evening news once was, what’s needed is not the removal of political ads, but rather a foundation of real news.

An information offsetting policy that Facebook could adopt would work like this: For every political ad served across Facebook and Instagram, those same users would be served an equal number of organic impressions from credible news sources on the key issues of the day. These offset impressions wouldn’t be responsive to the political content itself, and they wouldn’t be an attempt at fact checking. Rather, they would be chosen the way an editor chooses what goes on the front page of the morning paper.

This injection of news would help level the information playing field and force us all to at least be exposed to fact-based journalism in our daily lives. It’s an important step further than the News tab that was introduced on Facebook in October and is wholly separate from Facebook’s troubled attempts to moderate content.

Information offsetting would not require Silicon Valley innovation and could be implemented immediately. The mechanisms to accomplish this have powered the Fourth Estate since the dawn of our republic: editors and reporters with a singular mission to get to the truth, wherever it may lead. And luckily, against all odds, these organizations exist today. They include flagship news organizations like The New York Times and The Washington Post to startup news outlets including Vox to nonprofit journalistic organizations like ProPublica and The Texas Tribune. Content these outlets publish goes live on social media day in and day out. Sadly, it’s deprioritized by algorithms that reinforce our partisan beliefs and corporations that are slaves to the monetization of our attention.

I realize the very mention of the outlets above can elicit calls of fake news. But adults in the room must lock arms and affirm the integrity of these news organizations and the critical role they play in a healthy, informed electorate.

Is this solution perfect? Far from it. The climate-savvy will point out that carbon offsets are no panacea either. But just as carbon offsetting is one tool in a much broader toolbox to help us tackle global warming, information offsetting is a tangible tool that Facebook can implement today as part of its larger journey to reckon with the company’s enormous societal influence, and to better align marketing effectiveness with the greater good.