Walmart and Target Are Banding With Google to Take on Amazon

And why others are likely to join 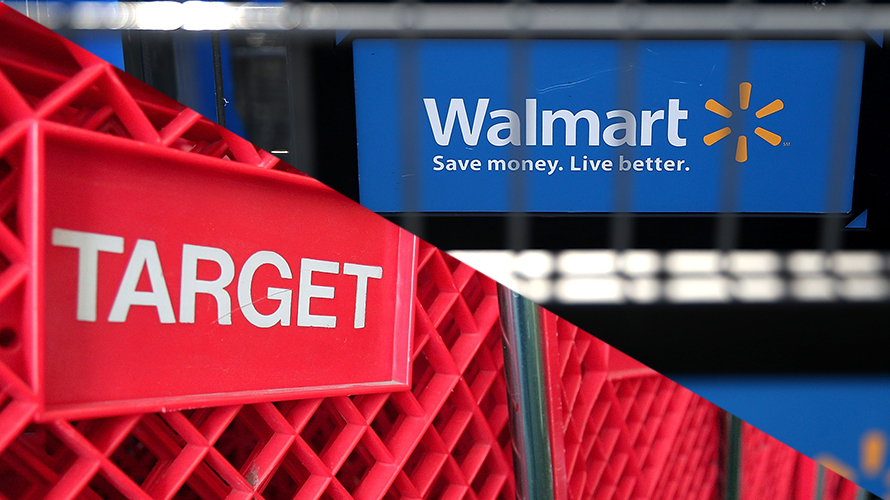 Target and Walmart are teaming up with Google against a common enemy.
Source: Getty Images
Share
By Lauren Johnson
|
October 12, 2017
Share

A few years ago, the idea that Target and Walmart would publicly chat about having the same strategy would have seemed odd—the retail titans are notoriously tight-lipped about their tactics, particularly when it comes to giving the other intel on what they’re doing.

But as Amazon’s dominance continues to grow, stealing shoppers away from brands’ ecommerce sites, an intriguing partnership today with Google offers a look at how retailers could be more willing to put their differences aside and work together to fend off Amazon’s encroaching competition. While Google said that it will keep the two partnerships separate from a data-sharing perspective, the deals show how major retailers are willing to back the same initiatives for the sake of shaking off Amazon.

“These partnerships aren’t about voice—they’re really more symbolic of the fact that major retailers are willing to partner with Google in the fight against Amazon,” said Cooper Smith, director of Amazon research at L2. “Brands and retailers need to scale their audiences in order to compete against Amazon online, and Google can offer them that. We’re in the beginning stages of what eventually could be a legitimate alternative to Amazon.”

Today Target announced that it’s making its inventory available on Google Express, the shopping service that also counts Costco, Kohl’s and Walgreens as clients. Consumers will also be able to ask Google Assistant, which is plugged into its Google Home devices, to order products.

By next year, shoppers that use Target’s credit card to purchase items will save 5 percent on orders from Google Express. The retailer also plans to build out a capability that allows consumers to link their Target.com accounts to Google to receive personalized product recommendations.

In August, Walmart announced a similar voice deal with Google that allows consumers to purchase “hundreds of thousands of items” by linking a website account to Google Assistant. Over time, Google’s technology can remember which products, sizes and flavors someone regularly buys to make check out a bit faster.

Now, Walmart and Target will somewhat compete on terms—or keywords—that consumers order from Google. For example, if someone asks Google Home to order detergent and they shop from Target more frequently than Walmart, Google will surface product recommendations from Target.

“This is clearly a chain reaction to the Amazon acquisition of Whole Foods,” said Mario Natarelli, managing partner at MBLM. “Google’s expertise founded around search gives them a profound understanding of consumer intent—they probably know more about what people are specifically searching for than any other company. Finding ways to bridge that with what Walmart or Target understands around satisfying demand seems like a potentially powerful partnership.”

In terms of data-sharing and the possible conflicts of interest of working with both Target and Walmart, a Google representative said that “privacy is a top priority at Google.”

The rep added that, “Data-sharing for the purposes of personalized shopping recommendations or anything else is between Google and the respective retailer.”

Still, Natarelli said that Google’s ties to both retailers is bound to have challenges.

“Since the bulk of [Google’s] business is selling search to advertisers, how they then court or future a relationship with two major retailers creates an inherent channel conflict with other retailers,” he said.

While there’s a lot of buzz around voice, the space is still small because the devices aren’t mainstream with consumers and skills require a different level of expertise than most marketers have. A study released earlier this week found that only 15 percent of business-to-business marketers have developed voice skills for Amazon Alexa while another 23 percent said that they planned to roll out voice skills later this year.