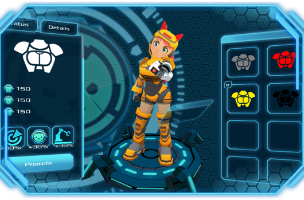 TouchTen Games has announced the development of its upcoming side-scrolling run and gun mobile game, Target Acquired. Inspired by titles like Mega Man and Temple Run, the game contains a musical score composed by Manami Matsumae, who composed the music for the original Mega Man. Target Acquired follows Yura, a Japanese police “cat girl,” on a quest to stop an evil genius cyborg mouse from achieving world domination.

In this game of cat and mouse, players travel to Nekomipolis and will chase down enemies in futuristic settings, both on foot and using vehicles. Players can jump onto platforms of various heights, jump over obstacles, dash over short distances, and fire their weapons at enemies on the path.

While running, players will collect orbs, and may sometimes face boss robots during gameplay. Players can level Yura up over time, changing her armor and acquiring other enhancements for the game. The company has been working with Ryo Teruya, former Square Enix Indonesia CEO, on the design of the game.

To support the game’s development, TouchTen Games has launched a Kickstarter campaign for Target Acquired, with a goal of $10,000. Backers will receive various prizes related to the game, from digital wallpapers and t-shirts to Kickstarter-exclusive in-game content and early beta access to the title before its official launch next year.

TouchTen is aiming for a May 2015 release of Target Acquired on iOS and Android devices. Backers who pledge at the beta access level can expect to receive access to the game in January.