Social media fashion history is made with a fabric designed entirely by tweets. 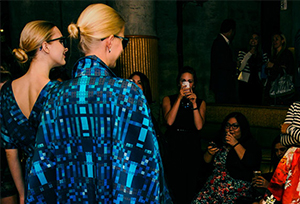 With the help of fashion designer Christian Siriano and the a crowd of music and fashion enthusiasts, Verizon’s #socialimprintproject has turned social media users into ad hoc textile designers.

As part of the Verizon Backstage Livestream festivities during this year’s Fashion Rocks event, tweets and posts surrounding the event were used to create a social media fashion statement. Verizon analyzed and aggregated the mentions and hashtag use every 30 seconds, and the top eight topics on both fashion and music determined the pattern and colors used.

Verizon’s interactive illustration of the process shows that while Nicki Minaj held the top spot for music tweets, Justin Bieber drove “underwear” into the one of the most popular fashion topics after he appeared onstage partially dressed. By the end of the night, a fabric entirely shaped by social conversation was born.

Forbes reports that Siriano unveiled his final social media fashion designs late last week, a pair of blue-toned dresses that are currently up for auction to benefit Dress for Success.

“Projects like this are what fashion is all about,” said Siriano in a video on the #socialimprintproject page. “It’s about taking risk, it’s about trying new things, and I think in the end it really turned out quite beautiful.”

Take a closer look at how the trending topics of the night affected the design in the infographic below: