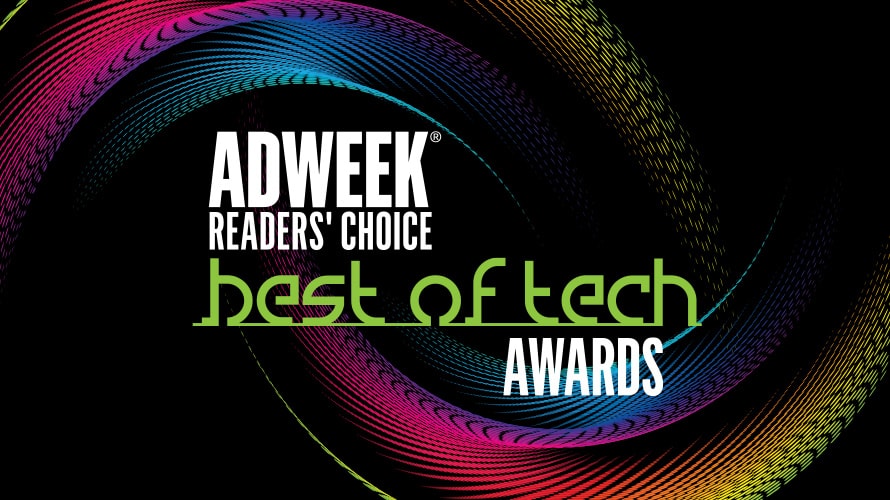 Over the last several months, we asked you, our reader, to weigh in on which ad-tech and mar-tech companies you deemed to be the best of the best across a variety of categories. Last month, we announced the finalists, and now—after three rounds of voting and roughly 50,000 votes—we are happy to reveal the winners in each category. Congratulations to all the honorees, and to all of you, the Adweek community, for participating in our first annual Best of Tech Readers’ Choice Awards. —Josh Sternberg The technology platform allows users to send personalized emails, in real time, based on signals that could range from a site performance to that email’s audience. Readers said the software was easy to use, the support users got from the team was unparalleled and the software’s ability to personalize content made Movable Ink notable. The company’s growth is evident in some of the big-name clients it has landed, including the Democratic National Committee, which used its software to send personalized emails to the different types of voters who support its party. —Sara Jerde Headquartered in Portland, Ore., and led by top marketing and tech executives, Lytics has risen quickly, earning business from brands like Atlassian, The Economist and Nestlé. The platform, which allows for a personalized marketing plan, had a record-breaking 2018, during which time the company nearly tripled revenue. And Lytics is aiming to go even further. It just closed a $35 million Series C investment round at the beginning of this year, from top financers such as Comcast Ventures, Rembrandt Venture Partners, Two Sigma Ventures and Voyager Capital. —S.J.

Hootsuite tied with Sprinklr in this year’s Readers’ Choice Awards for best social-marketing management platform. Hootsuite went live on the internet in the early years of Facebook and Twitter, and within a couple of years hit more than 1 million customers. Now the platform has been optimized for mobile use, and has partnered with leading social media sites like Google, Instagram, LinkedIn and Pinterest. Hootsuite is also getting into events and putting on educational seminars for users, and now boasts more than 17 million customers. Sprinklr, meanwhile, announced that it would release two new AI offerings that would ease the experience for customers, including to help brands increase revenue and reduce costs. Sprinklr also has a substantial international presence to better assist with personalized experiences, with 22 offices in 15 countries. The platform works with brands including Allstate, McDonald’s, Nike, Samsung and Verizon. —S.J. A network like Verizon Media comes with undeniable influence. With the option to place ads on sites that include TechCrunch and Yahoo, campaigns have the ability to achieve 35% greater engagement with carousel ads over single-image ads. The network has captured a young audience, too. Verizon Media, which has analytics from one-third of all app traffic, reaches over 90% of millennials in the U.S. on their mobile devices. In all, Verizon Media touches over 96% of all iPhone users in the U.S. —S.J. Since closing its blockbuster deal to acquire Videology last year, Amobee has further beefed up its advanced TV and digital video business, parlaying exclusive partnerships with Univision and ITV into a new marketplace for connected TV and cross-screen advertising. “The last year has been transformative for Amobee,” CEO Kim Perell said in a recent statement. “The acquisition of Videology has also allowed Amobee to focus on serving the needs of the world’s largest broadcasters and media sellers for both linear and digital television, and we’re proud to be a leader in the convergence of TV and digital.” —Patrick Kulp

Since selling to Publicis for $4.4 billion in the holding company’s biggest deal to date, Epsilon has woven its capabilities across the agency network, buttressing Publicis’ bid to compete with more data-centric consultancies. The acquisition capped half a century of business for Texas-based Epsilon and served as an affirmation of the moves it’s been making to reach further into the personalization and digital advertising space over the past five years. The company was previously owned by loyalty marketing provider Alliance Data. It claims to have 250 million customers in its database and sends 71 billion personalized emails per year. —P.K. In the half decade since Conversant sold to Epsilon, the interaction management company has served as an integral piece in the latter’s push further into personalization and digital advertising, culminating in Epsilon’s sale to Publicis this year for $4.4 billion. Founded two decades ago, Conversant boasts around 4,300 clients, more than 400 of which are blue-chip brands, and delivers 5.1 million purchases daily. In April, Publicis Groupe CEO Arthur Sadoun told Adweek Conversant is “a big part of [Epsilon’s] business that can deliver personalized messaging at scale” in justifying the holding company’s acquisition. —P.K. A savvy string of complementary acquisitions guided Synthesio to its own sale to market research and consulting firm Ipsos in October of last year. Since then, the social intelligence platform has been tapping Ipsos’ data and tech resources for a series of artificial intelligence tools meant to cull more valuable information from the social listening data it collects. “For the past 10 years, social listening platforms have been focused on online data collection,” noted Julien Plée, chief technology officer at Synthesio, in a recent statement. “As the volume of data increases, our users have come to expect more—more powerful analytics and more flexibility. By bringing BI-style reporting to our Social & Consumer Intelligence Platform, we have addressed a major gap in the market. We have created a substantially better way for our customers to understand the stories behind their data.” Since selling to Opera Mediaworks, the since-spun-off ad unit of the mobile browser Opera, in 2014 and consolidating under the AdColony brand in 2017, the platform has become one of the biggest mobile ad networks on the market, with a reach of more than 1.5 billion users. The company has spent recent years paring down its operations and widening its customer base in the name of profitability. It introduced a promotional $5 million fund in May that encouraged mobile publishers to use its in-app monetization with 100% revenue sharing for 90 days and a 15% user-acquisition credit (the fund was so popular, the company says, it has been used up). Backed by the resources of parent company Inmar, Collective Bias has worked to quantify every aspect of the notoriously touch-and-go business of influencer marketing with data analytics and artificial intelligence. One of the company’s key breakthroughs came in January 2018 with the introduction of PrescriptiveIQ, a proprietary tool that uses natural-language processing and other machine-learning tech to rank the best influencer for a given campaign. It’s since gathered the numbers to back it up: Collective Bias claims influencers selected through the software rack up 3.4 times more content views, 1.45 times as much earned media and 36% more engagement compared to the average campaign.

The Trade Desk reported revenues of $160 million for the three months up to June 30 of this year, representing a 43% annual increase. The ad-tech company also reported significant omnichannel gains, with almost half (47%) of its revenue coming from mobile devices. And with that, mobile video spend grew 50% compared to the year-ago period. The Trade Desk has also set its sights on the emergent connected TV space. “In one of our most important initiatives in CTV to date, we recently joined forces with Amazon Publisher Services to bring programmatic demand to their third-party premium TV content providers,” says Jeff Green, CEO of The Trade Desk. “We are in the midst of the digitization and transformation of TV advertising, and we are uniquely positioned to help advertisers and TV content providers become more data driven in everything they do.” —Ronan Shields

Google’s ad stack is easily the biggest in the business, and after the overhaul of its unit formerly known as DoubleClick (to now run under the Google Advertising Manager moniker), it rolled out first-price auctions in 2019. The new model of monetization, as opposed to the earlier second-price auction format, is geared toward improving return for publishers that monetize ad inventory via the network. Writing ahead of the launch, Jason Bigler, then director of product management at Google, said, “For publishers, we’ll start a new beta that provides data from all the bids submitted to your auctions. This information will help you evaluate the value of your inventory and better understand the bidding behavior of buyers.” —R.S. One year ago, RTL-owned SpotX was one of a number of sell-side programmatic companies to co-sign an open letter titled “Principles for a Better Programmatic Marketplace.” It was a pledge to follow three core tenets with ad auctions: quality assurance, fee transparency and fair market values. This was quickly followed by its co-participation in a supply-path optimization program with Havas Group that helped U.S. premium publishers enjoy a collective 217% bump in revenue after it helped cut out less salubrious players from the agency’s media plans. —R.S.

Two years ago, Rubicon Project switched CEOs after what could be sparingly termed as a faltering year on the public markets following its management’s failure to catch on to the popularity of header bidding among publishers. However, under the stewardship of CEO Michael Barrett, Rubicon has helped establish itself as a co-founder of PreBid.org—an open-source industry body geared toward peer-sourcing header bidding solutions—and counts mobile as 56% of total revenue, according to its Q2 2019 filing. Meanwhile, Amobee has continued to push ahead with its focus on television products, securing a licensing deal with U.K. broadcaster ITV as well as Univision. —R.S.