Social video will make up 50% of publisher's revenue 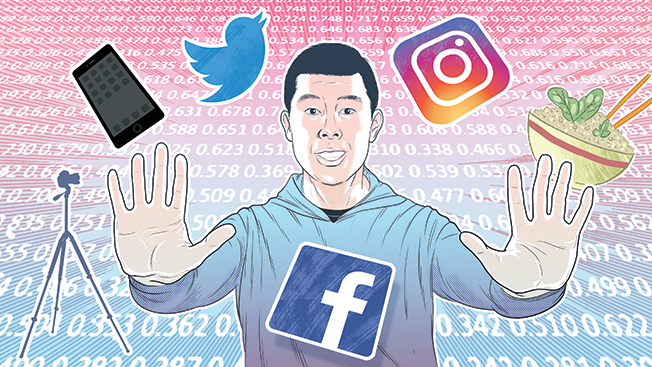 Alvin Zhou is not your typical video producer. On a recent fall afternoon, he's hovering over a table in a test kitchen cutting and prepping vegetables and meat that he'll later whip into an ersatz "fried rice" dish made with cauliflower. As I watch, I'm offered a hot chocolate chip cookie topped with sea salt straight out of the oven.

A camera hangs above Zhou's workspace to film each step of the cooking process, creating a video that, after editing cuts, employs a minute's worth of fast-paced, simple shots of his hands. He's carefully going through the recipe steps to help people recreate the dish at home. No, this isn't the test kitchen of Bon Appétit, Food & Wine or any other high-end foodie title. This is the New York office of BuzzFeed—the viral digital publisher founded 10 years ago by new-media whiz Jonah Peretti, credited with creating the internet's most addictive content. Data inform Zhou's programming choices. As an example, recipes that swap vegetables for starches—like the aforementioned fried cauliflower instead of fried rice—have soared in views in recent months, which explains today's shoot. And the video includes four variations on the dish, with chicken, pork, beef and vegetarian versions. The diverse offerings are meant to encourage people to share the clip with their friends and family.

"Every single video that comes out, I look at it, I analyze it, and over time, I'm able to get a sense of what numbers I'm looking for or what number signals a viral video within the first hour," Zhou explains. He adds, only half-joking: "I refresh the Tasty page at least 200 times a day."

BuzzFeed's food brand Tasty exemplifies just how crazed publishers are in chasing digital video—a $10.3 billion industry this year that will be worth $12.5 billion in 2017, per eMarketer estimates. In 15 months, Tasty has created 2,000 recipe videos that in aggregate reach a staggering 500 million people a month—and the brand counts more than 100 million Facebook fans. In September alone, Tasty generated nearly 1.8 billion—yes, billion—views with 1.6 billion of those views coming solely from Facebook, according to data from video analytics company Tubular Labs.

BuzzFeed's initial impact on the media world a decade ago came via its popular online listicles, slideshows and quizzes, but it's also sprinkled serious journalism into the mix in the ensuing years. So consider Tasty part of BuzzFeed 3.0, which is laser focused on mastering video that's distributed on Snapchat, Facebook, Instagram and YouTube.

Why the laser focus? Fully half of BuzzFeed's reported $250 million in revenue this year will come from the medium. (BuzzFeed disputes the $250 million—but more on that later.)

True to BuzzFeed's style as an R&D lab for modern-day publishing, making a Tasty video is equal parts science and art. In fact, what's captured in data after Zhou's videos go live is as important as making them. Based on past stats, a 75-person team can effectively predict a clip's buzz factor before it's even published. Coupled with proprietary analytics technology that determines the right platform and time when a piece of content is most likely to spread like wildfire on social media, Tasty videos score millions of views. Then, the stats are obsessively pored over for deeper insights and best practices moving forward.

To get an idea for BuzzFeed's complex distribution strategy, consider how a recent Tasty video for butternut squash pasta rolled out online. A 73-second video was first published to YouTube, where it racked up more than 65,000 views in 22 hours. The next day, a shortened version of the clip—65 seconds—posted to Facebook generated 4.4 million views, 19,500 shares and 52,000 likes in four hours. Meanwhile Zhou's cauliflower dish was published simultaneously to YouTube (as a two-minute-and 23-second video) and Facebook (as a two-minute-and 16-second video), generating 91,000 and 8.1 million views, respectively, within 22 hours. That is social video at its most effective. 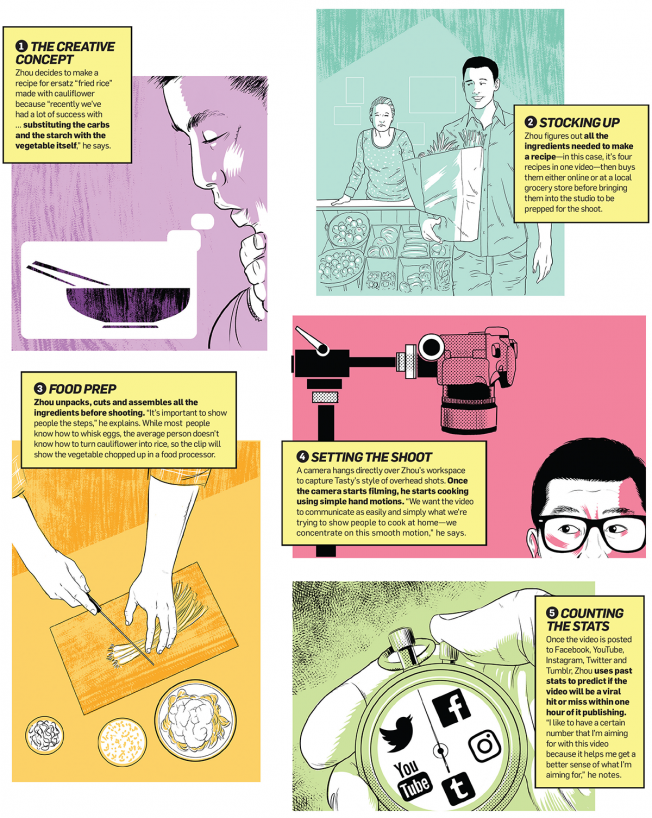 Those types of statistics represent just the tip of the iceberg in terms of data that Peretti and his teams collect and analyze. Specifically, they fixate over a stat called "share rate" that tracks how many people socially pass on a video to friends and family divided by the total number of views. A well-performing Tasty video, for example, generates a 1 to 3 percent share rate, and the average video is shared 165,000 times.

"We see shares as a better metric of success," notes Ashley McCollum, general manager of Tasty. "Many people scroll by something on Facebook and watch it for a second or three seconds and then they drop off to something else. But someone who would watch it to the end and then share it is a great signal that that piece of content means something."

Buoyed by the quick growth in its first year, Tasty is starting to experiment with longer pieces of content that pull in celebrity faces and new talent, particularly on YouTube, its fastest-growing platform with 1.5 million subscribers that have hit 175 million views over the past three months, per Tubular Labs.

Two weeks ago, the food brand launched a new series called "Tasty Story" with celebrity chefs Marcus Samuelsson and Martha Stewart, who each created their own recipe video with twists on fried chicken and onion rings, respectively. "We've been doing a lot of tests with chefs, whether they're celebrities or local chefs," notes McCollum.

Such impressive social stats have convinced marketers like Mondelez, American Express and Newell Brands to buy ads that work their products into the short clips—which rack up millions of views and audience sizes that marketers say compare to the Super Bowl. 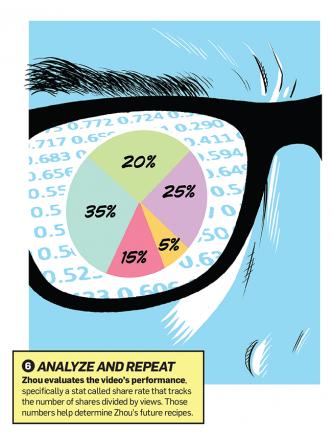 In March, Newell Brands created a sponsored Tasty campaign that featured an Oster grill in a minute-long video for a jalapeño and cheese-stuffed hamburger. While Newell's team expected a boost in views, it didn't expect that the grill would immediately sell out through ecommerce retailers Amazon and Target, and the brand's marketers were able to attribute the sales lift directly to Tasty since it was the only running paid media. Interestingly, the post didn't include a link for viewers to purchase the item, but commenters did a bit of the heavy lifting for the brand, leaving comments with links that people could shop from. All told, a series of three sponsored clips reached 369 million people with 310 million views and 1.8 million shares. Newell paid in the mid six-figures for the flight.

"The initial intention was to drive brand awareness, but it also turned into a purchase-intent campaign—when we saw that this was actually moving product, we doubled down our investment and continue to expand that to other brands in the portfolio," says Jared Anderson, Newell Brands' director of media ventures. "This purely digital-activated video got us what we would have gotten in a Super Bowl ad, for example, for a fraction of that cost."

That kind of reach and approach to content extends beyond Tasty into BuzzFeed's broader video efforts, too.

Take this year's bizarre presidential election that BuzzFeed News has extensively covered. In February, Andrew Kaczynski and Nathan McDermott—two former BuzzFeed News political reporters who were scooped up by CNN this month—published an in-depth investigative text and audio article about comments that Republican candidate Donald Trump has made about women on the Howard Stern Show. One month later, BuzzFeed News created a Facebook video that pulls pieces of the text article together, generating 77 million views and 1.1 million shares.

And when it comes to playing with newer platforms like Snapchat, the publisher's distributed-media expertise sets it apart from other publishers trying their hand at native advertising, explains Brandon Rhoten, vp of advertising, media and digital at Wendy's.

To relaunch a taco salad that was popular in the 1990s, Wendy's recently worked with BuzzFeed to take over the publisher's Snapchat Discover channel and created an online quiz with nostalgia-themed videos and articles with headlines like "27 Struggles That Were All Too Real to '90s Kids" designed to appeal to millennials. The campaign netted more than 6 million impressions, up from a benchmark of 3 million to 5 million, with completion rates 20 percent higher than the publisher's typical content, according to Wendy's.

"One challenge we often face with other partners is having to drive people to a destination to view the content or incentivize viewing in some way," Rhoten says. "The content we're creating with BuzzFeed is thematically similar to their organic content, so it's more appealing."

The cross-platform pitch is also evidently easier to sell to brands, adds sales vet and BuzzFeed chief revenue officer Lee Brown, who has worked in similar roles at Yahoo, Tumblr and Groupon. "What I've noticed in the media landscape is that the people out in the marketplace that are selling these platforms—whether it's the Internet, Facebook, Twitter, Pinterest—they're selling just the platform itself," he says. "So, I don't come in with a notion of, 'Hey, we've got to have you up on Facebook this month or Snapchat this month or Twitter this month.' It's, 'Hey, what's right for the marketer?' It enables us to be really flexible in the formats and the platforms to work with the marketer. I'm not confined by the boundaries of my owned-and-operated channels."

BuzzFeed hasn't always been this enthusiastic and confident about video. Peretti says that two years ago, he was skeptical of pivoting from text to video because, "I didn't see people consuming lots of video on mobile." Suffice it to say that Peretti no longer harbors such doubts.

In fact, now the digital upstart has its sights set on linear media. To that end, NBCUniversal reportedly doubled its investment in the publisher from $200 million to $400 million, which includes brands like Tasty working with NBC's Today show to create on-air cooking segments. BuzzFeed is also teaming with Warner Bros. to produce a full-length movie based on 2014's viral hit Brother Orange story about BuzzFeed editor Matt Stopera's journey to find his missing phone that ends up in China.