The NBA legend's first bot is sponsored by DXL 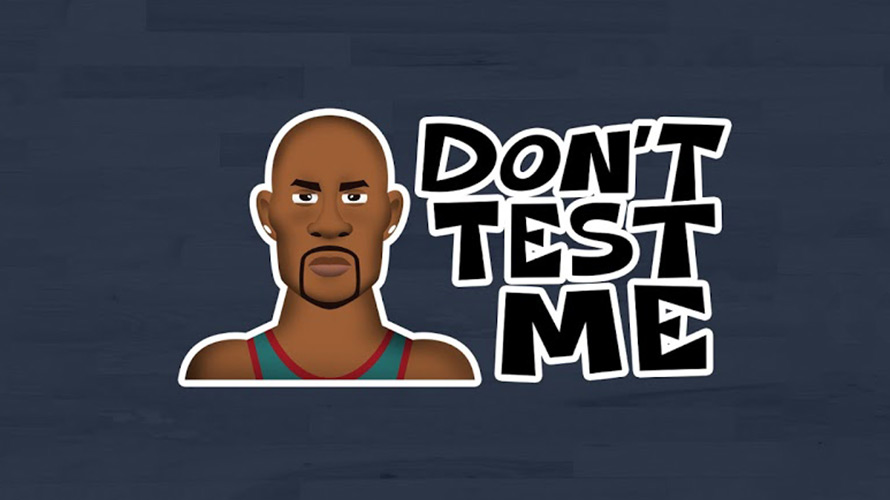 As one of the most feared defenders during his lengthy five-team tenure in the NBA, Gary “The Glove” Payton was known as a trash-talker. While playing for the Seattle Supersonics and Los Angeles Lakers, the point guard was known for baiting teams with court-side chatter. But now, he’s baiting fans with his own chatbot.

For the 2017 NBA Finals championship series between the Golden State Warriors and Cleveland Cavaliers, Payton teamed up with menswear brand DXL for a chatbot experience that combines the Hall of Famer’s legendary offline personality with online commentary to talk basketball and fashion.

The bot’s called “Trash Talk With Gary Payton” and was built by San Francisco-based chatbot developer GameOn, which has created bots for brands like Sports Illustrated and Live Nation. The experience gives users the latest news, hot takes, scores and other content like live videos during games. It also includes GIFs of Payton’s emoji, plenty of promotional messages and links for the retailer, and of course, some trash talk along the way. (During the next game in the series tonight, Payton will be using the bot to provide live commentary both in the form of text and videos.)

“You’ve got to understand what I was in basketball—I was a trash-talker,” Payton told Adweek. “So that was my first thought, to trash-talk. What do I say that people want to hear or want to hear me say or think I’m going to say?” 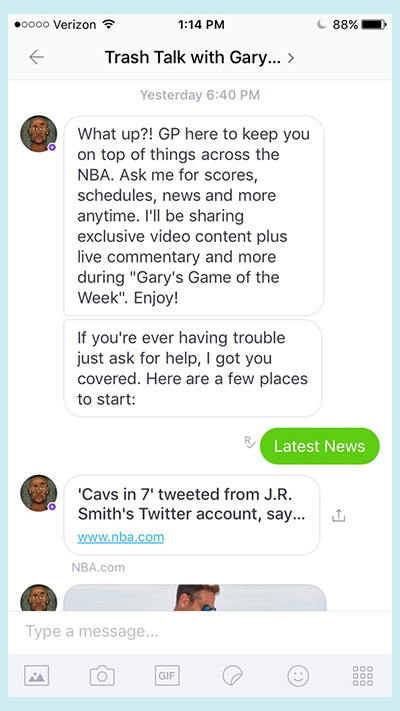 Payton, an investor in GameOn, first heard of it last year through the rapper E-40, who he said has been popular with Bay Area sports teams over the past couple of years. After retiring in 2007, Payton became an investor in several restaurants. However, one of the industries he became more excited about was tech. (Along with Payton, other GameOn investors include Joe Montana and Snoop Dogg.)

“Chat is becoming that type of technology to go into sports and when people see that and that we’re involved with it, then they get more and more involved in it,” he said.

To decide what to use for the bot, Payton and the GameOn team went through old footage of his time on the court to see what some of his taunting back then entailed. What did he say to Michael Jordan? What did he say to Shaq? And while back then during the heat of the game, anything could come out, he said they wanted to make sure that chatbot Gary was family-friendly.

Like many chatbots these days, Payton’s is pretty basic when it comes to understanding much more than the built-in prompts. However, since launching a few weeks ago, it’s already found an audience. According to GameOn CEO Alex Beckman, the bot has 25,000 daily active users. Those users are split evenly between Facebook and Skype, with the rest mostly coming from Kik. However, Kik’s users have five times the engagement seen on other platforms, Beckman said.

“It’s almost like Gary is the expert in the huddle,” Beckman said. “And the chat exists around Gary, but it’s not all about Gary.”

The bot is meant to turn Payton into a “social broadcaster,” according to Beckman that allows him to engage with thousands of fans at once while also promoting DXL, which is doing a six-figure chatbot with GameOn through four separate bots. (Others related to Major League Baseball and the NFL will launch later this year and feature other celebrities.)

The campaign is a first for DXL, which has 200 retail locations for plus-size men, said Sahal Laher, chief digital officer for the brand. After Laher joined earlier this year, the brand began doing research on its customer base and learned that sports and social media were two of the broader topics DXL’s audience had in common.

“The digital interactions need to shift from kind of passive to really more proactive in the way that they engage with consumers,” he said. “And chatbots can really play a role in that because they can bring guided selling in the case of sales and fittings.”

In the basketball banter, Payton’s bot sometimes sends links to DXL’s website or asks if the user wants more information. However, it sometimes comes across as forced, which takes away from the fluidity of the sports talk.

Earlier today, his bot pushed out a daily hot take, which predicted the Warriors will win the title. (During an interview on Thursday night, he said the Cavaliers already gave the series away.)

“I’ve been hearing a lot of old timers saying their teams would beat these Warriors,” Gary Payton’s bot said. “Magic said it, Dr. J. said it. That’s fine. Rasheed Wallace said it. Come on, man. That’s ridiculous. But why can’t us old dudes just let these guys live. Let’s just enjoy what we’re watching. And the fact is whether you like the Warriors or not, they are out here making history. Quit hatin’!”