Facebook Is Building Its Own Neuroscience Center to Study Marketing

The lab will work with agencies, brands and media companies 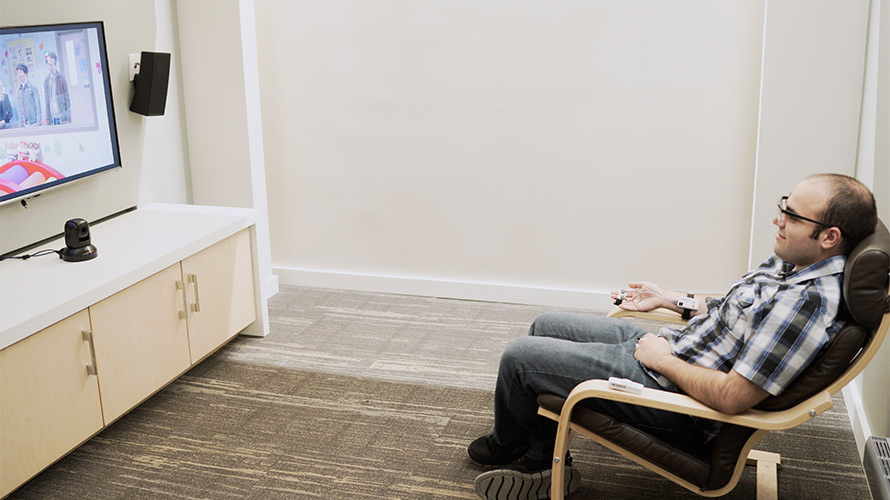 Earlier this week, inside of a former nightclub in New York, construction workers were busy hammering and drilling away, building out what will soon become Facebook’s next marketing endeavor in lower Manhattan.

It won’t be finished for a few more weeks, and it didn’t look like much. It didn’t have any of the Facebook blue, or the IRL wall for visitors to write on or take Instagram photos in front of. In fact, it likely never will look like much—and that’s exactly what Facebook wants. The building is meant to be “rather like a doctor’s office,” Daniel Slotwiner, Facebook’s director of advertising research, said during a tour he gave Adweek of the two-story facility.

Next month, Facebook plans to open what it’s calling the Center for Marketing Science Innovation, which will be a place for the social network to conduct neuroscience research that will help advertisers, publishers, brands and tech companies better understand what type of content resonates across platforms and devices. The lab will study users in a variety of situations meant to simulate viewing content in various settings, including on a desktop computer, mobile device or big-screen television. The research lab, which Facebook says will be managed by a third-party company, will have rooms set up like living rooms, while others are more like a standardized testing center or a conference room.

“We know how much time people are spending on the platform, so this is really about how that time is spent.”
Daniel Slotwiner, director of advertising research, Facebook

Slotwiner said the lab will monitor and measure users’ biometric data—via eye tracking, skin response, heart rate and facial expression—while they scroll through their news feeds or while watching 20- or 30-minute shows. He said the company wants to better understand these signals and how they relate to user behavior.

“A lot of what we don’t understand is where people’s eyes are going when they’re on the platform,” he said. “We know how much time people are spending on the platform, so this is really about how that time is spent and what features on our product they’re looking at.”

It’s the first time Facebook will have its own lab, but it’s not the first time it’s conducted neuroscience testing to understand how users view and think about content in a controlled environment. For example, last month the company released a podcast episode about Facebook IQ’s findings related to eye tracking on Instagram. Results showed that users focused more attention on the parts of ads that have images than they did on text in ads.

While the focus of the new facility will be to better understand mobile consumption, Slotwiner said technology to measure neuroscience related to other mediums, including virtual reality, will likely be added in the future.

So how will Facebook ensure the data it’s putting out into the world remains pure and not too unnecessarily influcenced by the social network’s own biases and intentions? Slotwiner said the company will be releasing the results of most research initiatives to the public while also partnering with brands, agencies and academics. The goal will be to better understand content consumption in a way that drives long-term strategies for brands and media companies. (Some media organizations, such as ESPN, already have their own facilities with similar technology.)

“We’re not coming in to say, ‘This is the way to do X,'” Slotwiner said, “quite the opposite.”

The neuroscience of marketing isn’t necessarily new. But it has become more popular in the past few years. Agencies such as WPP-owned LightReaction have already conducted their own research while also partnering with third parties. Other companies, such as Nielsen, have entire divisions devoted to the science and have in recent months partnered with companies such as Time Warner to study how media affects the masses.

“The major benefit is that when relying on traditional methods like self-promoted surveys and focus groups, there are a lot of biases in the data that don’t tell the whole story about what the human experience is,” said Spencer Gerrol, founder and CEO of Spark Neuro, which has conducted neuroscience tests for brands like Bose and Angry Birds.

"Because of those [human] biases and people’s inability to articulate their feelings second by second, you’re just missing a lot."
Spencer Gerrol, founder and CEO of Spark Neuro

According to Gerrol, whose company has spent the past five years creating algorithms for understanding data, not only from eye tracking and heartbeats, but also from brain waves by placing electroencephalography, or EEG, technology that collects 260 data points per second. He said that by creating a “moment-by-moment” understanding of how humans engage with content, granular data allows for actionable research. (Facebook’s research lab won’t have EEG capabilities when it opens next month.)

“Because of those [human] biases and people’s inability to articulate their feelings second by second, you’re just missing a lot,” Gerrol said.

Asked about the benefits of in-house research versus something conducted by an external party, Gerrol said the field is still such a “fledgling industry” that additional resources will help improve research and insights for marketers. However, data that only pushes a company’s agenda could also be a “slippery slope.” But, he said, if companies remain true to the research, it could make for interesting findings. He said credibility and accuracy are the most important things.

“I believe that there is great value in this research methodology being something that is being done more and more, including in house,” Gerrol said. “And when I say that, I’m already speaking against my own self-interest. But I believe in this so much that the more the world of researchers can be equipped to do this, the better we’ll be.”