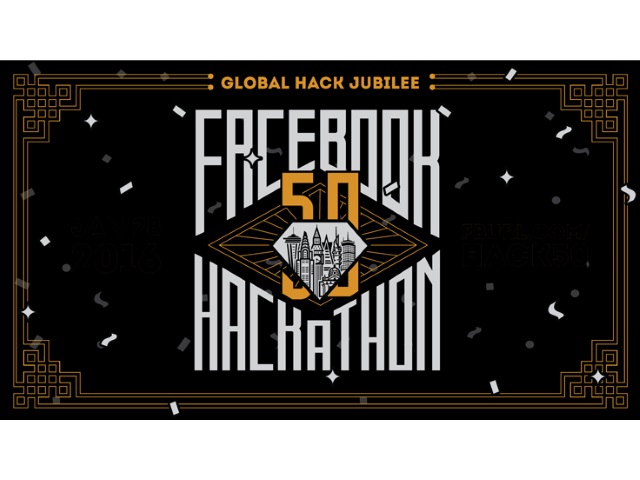 The social network pointed out that its initial hackathon of 2016 was also its 50th companywide hackathon, so it was dubbed the Global Hack Jubilee.

Facebook also highlighted its Voyager transponder, saying in a blog post that it was built on the data-center technology it used for its Wedge 100 top-of-rack switch, and it was able to transmit Ethernet traffic at 200 gigabits per second over a single wavelength.

Messenger was also a frequent topic during Facebook’s hackathons, and the social network said in its blog post:

Hackathons often aren’t long enough to create something completely from scratch. Instead, many teams find ways to build on top of Facebook’s existing infrastructure in new ways. A Seattle-based group of engineers and designers leveraged some of the infrastructure behind Facebook Live with the goal of building a small, private, livestreaming experience within Messenger. The hackathon project was built on top of multiway, a backend service in C++ that handles connectivity, media encryption and decryption, and sharing call state between multiple participants. By the end of the hackathon, they were able to start a live videostreaming session in a group thread on Messenger and have other people in the group join as view-only participants, using the same signaling and permission models as the existing group audio calling feature within Messenger.

By *very* popular demand, and after a lot of work to get it right, we bring you group video chats to Messenger on Android, iOS, and desktop on Messenger.com worldwide starting today!

When you want to get together and see and hear each other face-to-face with multiple people, tap on the video camera icon in any group thread to start streaming video. This will notify (not ring) everyone in the said group so they can join at any time, and reciprocate. You can also decide to ring specific people’s phones in the group to make sure they join when you truly need them. It’s almost as good as getting together in a living room with your friends and family!

Last but not least, those of you on iOS will also have the ability to add 3D masks to make these live video conversations even more fun! Masks will also come to Android soon.

We hope you will love this new experience. And as always, please give it a try and send feedback our way so we can make it even better for you in the future!

They also exposed the multiway service via Facebook’s Graph API to allow Messenger calling from any third-party WebRTC client. Oculus built a voice-over-Internet-protocol feature on this infrastructure, which it announced at Oculus Connect 3 in October and recently launched as the Parties feature for Gear VR.

During a hackathon dubbed Hack With Heart, Facebook came up with enhancements to its Safety Check feature, as well as Community Help.

The social network’s recent addition of an instant-verification component for Account Kit to its Android software-development kit also emerged from a hackathon.

Facebook also detailed its work on Nuclide and Atom at its multiple-day Space Camp hackathon:

Nuclide is Facebook’s open-source integrated developer environment for iOS, React Native and web development. During our three-day-long summer hackathon, one engineer decided to hack on top of Nuclide to integrate support for the programming language Swift. Drawing on the expertise of a few other Facebook engineers, the result was a small package called nuclide-swift with features including building and testing packages via a toolbar, autocomplete, type hints, outline view, automatic formatting and package commands. The integration was contributed to the Nuclide project on GitHub just a few weeks after the hackathon, and the team is still adding new features.

Nuclide is built on top of Atom, an open-source desktop text editor. At another hackathon later in the year, a few engineers set out to produce a version of Atom that runs in the browser as a step toward supporting remote development. While web applications in general offer several advantages for engineers–for example, automatic backups, remote access and server-side processing–Atom on the desktop still enjoyed several features that weren’t available in the browser, such as synchronous access to the filesystem, access to local resources, natively implemented dependencies, access to native application-programming interfaces and unrestricted access to the internet. During the hackathon, the engineers found workarounds to these obstacles and contributed a set of scripts that repackages Atom’s source so that it runs as a web app. This hack is still ongoing–you can follow progress, try it out or contribute to the code on GitHub.