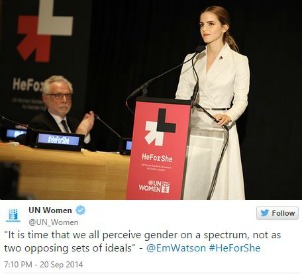 “It is time that we all perceive gender on a spectrum, not as two opposing sets of ideals” – @EmWatson #HeForShe pic.twitter.com/QgjAR2qYks

This was a big weekend for activism. This also happened: Emma Watson, Goodwill Ambassador for UN Women, helped to launch the HeForShe gender equality campaign. The campaign seeks to mobilize men in the fight for women’s rights, “[bringing] together one half of humanity in support of the other for humanity, the entirety of humanity.”

This is the second campaign we’ve seen in recent days that, while focused on an issue that has a greater impact on women, hopes to include men in a larger capacity. We support this.

Watson spoke on this, and took yet another step towards reviving the reputation of the word “feminist.”

“How can we effect change in the world when only half of it is invited, or feel welcome to participate in the conversation?” she said. “Men, I would like to take this opportunity to extend to your formal invitation. Gender equality is your issue too.” She talked about how manly men are restricted from asking for help and brought low by not achieving the stereotypical male markers of success. Preach Hermione!

HeForShe, she says, is about freedom. But it’s also about feminism, and Watson took yet another step towards reclaiming this word and making its message a positive one. It had gotten to the point when it wasn’t just Rush Limbaugh who was talking trash about feminists. Susan Sarandon once famously called the word “old-fashioned.” And she was joined by others like Katy Perry. Speaking in front of a class last semester, I was asked if I was a feminist. It seemed very simple to me (of course!) but for these younger college students, there were evidently conflicting emotions.

But women are increasingly taking pride in the word, with Beyoncé going so far as to stand in front of it like a wind-blown warrior goddess during her epic performance at the MTV Video Awards. Making feminism good and powerful and desirable will be important to a successful campaign centered on its tenets.

“For the record, feminism by definition is the belief that men and women should have equal rights and opportunities,” she continued. “It’s the theory of the political, economic and social equality of the sexes.”

That’s a simple (yet complex) idea that more and more people are getting behind. You can watch all of Watson’s effecting speech below.