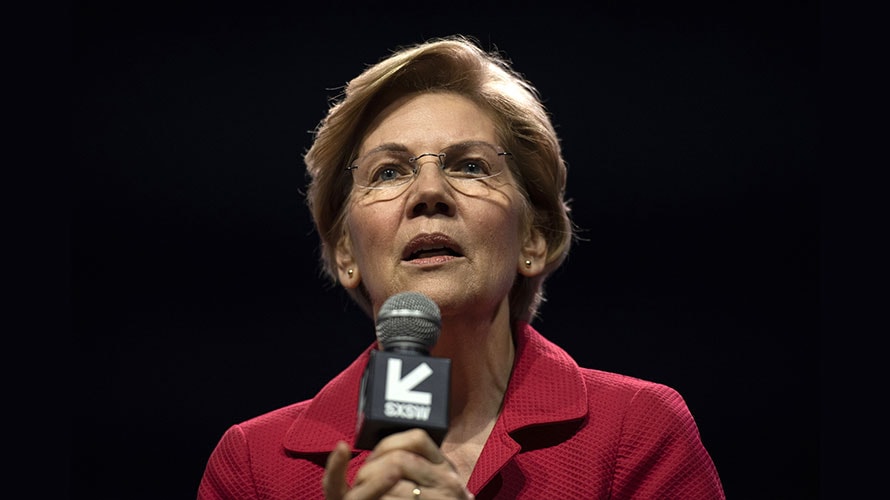 Today's legislation is a sign that Warren is keeping the heat on major industries, including the tech industry.
Getty Images
Share
By Kelsey Sutton
|
April 3, 2019
Share

The Corporate Executive Accountability Act, which Warren teased Tuesday in a Washington Post op-ed, would hold criminally liable the executives of any corporations making more than $1 billion annually in the event that their companies break the law or harm large portions of Americans or state residents in civil violations.

Any civil violation of federal state law that occurred during an executive’s tenure “that affects the health, safety finances or personal data” of either 1 percent of the U.S. populace or 1 percent of a state’s populace could face up to a year of jail time and additional fines for the first violation. Executives of companies that commit additional offenses could face jail time of up to three years.

“Corporations don’t make decisions, people do, but for far too long, CEOs of giant corporations that break the law have been able to walk away, while consumers who are harmed are left picking up the pieces,” Warren said in a statement announcing the bill.

“Corporations don’t make decisions, people do, but for far too long, CEOs of giant corporations that break the law have been able to walk away, while consumers who are harmed are left picking up the pieces.”
-Warren

Warren, a consumer rights advocate and Wall Street foe who has long pushed for more stringent laws regulating U.S. corporations, announced the legislation in tandem with the re-introduction of another bill. That bill would hold big bank executives responsible for making sure their companies are not breaking the law and would give the U.S. government more authority to prosecute financial crimes.

The Corporate Executive Accountability Act will likely face opposition in the Republican-held Senate and from Democrats with close ties to big business, but it’s part of Warren’s sustained focus on corporate America, which she has said faces few penalties in the event of corporate misdeeds.

“If top executives knew they would be hauled out in handcuffs for failing to reasonably oversee the companies they run, they would have a real incentive to better monitor their operations and snuff out any wrongdoing before it got out of hand,” Warren wrote in the Post prior to the bill’s release.

Earlier this year, Warren proposed breaking up big tech companies like Amazon, Facebook and Google. Today’s legislation is a sign that Warren is keeping the heat on major industries, including the tech industry, which makes billions every year off targeted advertising and has experienced major data breaches that exposed the personal information of millions of their customers.

The potential impact wouldn’t stop at big tech: data brokers like Experian, brands like Target and media giants like Sony have all experienced massive data breaches in recent years.