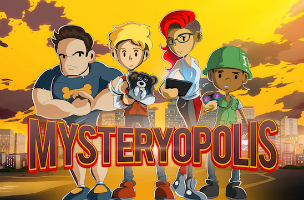 In Mysteryopolis, viewers / players follow along with the story of Jordy, a typical 13-year old turned secret agent, who must save his hometown of Mysteryopolis from a “major threat.” As users watch each portion of the seven-part series, they’ll play through multiple interactive mini-games to advance the story along. In addition to writing the storyline, Zuiker helped conceive the activities players will complete.

We had a chance to chat with Zuiker, alongside CEO of Fanlala, Alan Anderson, about the development of Mysteryopolis, and what it was like to create a new brand of mystery for a younger audience.

Inside Mobile Apps: What was the inspiration for Mysteryopolis?

Anthony E. Zuiker: Well, I have three children – 14, 11, 7, all boys – so I always wanted to do a mystery for children, as an original series. I had been dabbling in the adult crime space for a long time, and I loved the gaming space in terms of the technology, and I wanted to create something that was sort of a “fashion forward” version of “storytelling 2.0.” We kept the best of what we can do in terms of animation and movies, and combined it with gaming, and invented what we call “gamified narrative,” which basically is consuming a mystery movie for children. Every 30 seconds or so, you’re able to interact and play a mini-game inside of that which moves the story forward. You’re not just watching the episode, you’re playing the episode.

IMA: In terms of these mini-games, can you explain a couple of them or give examples?

Anthony: Sure. So, there’s seven episodes, for a total of about 90 minutes long. Each episode is about seven to ten minutes long. Every time you start an episode, there’s a level of interactivity, whether it’s using your finger to swipe on clouds or doing something to open somebody’s eyes, or something [that] kicks you off in terms of the storytelling.

Inside of that, for example, our main character Jordy is going to school one day on a skateboard, and he actually bumps into a truck that looks like it’s in front of an abandoned building. He gets curious, so he walks up to the gate to go investigate – there’s a lock there, and the camera will go inside the lock, and the gaming begins. So, they’ll do a small little broken key challenge; they’ll put the key back together, the lock opens and he continues forward in animation. He goes to the building, there’s a key padlock. You go ahead and play the key padlock game to gain entry, you’re inside and the [movie] continues.

Another example would be that you’re looking for something that’s buried in the desert. You click on different plots of land, you shake the tablet to sift through it to find the artifact and go forward. There’s always this level of really fun storytelling in terms of animation, with looking forward to these really fun games. They’re not just side mini-games for mini-game purposes; they’re actually intrinsic to move the story forward, and each episode features about five to seven of those.

IMA: What is the exact age range you were going for when you created Mysteryopolis?

Alan Anderson: The whole objective was to have something for four all the way up to ten – that sweet spot. We really believe that because as you get older, kids have really moved more toward even more sophisticated, teenage types of games. These games are really focused on the interactivity – the winnability, if you will. So, that’s the sweet spot for us, not only based on the tablet, but also based upon what we’ve learned over the years as it relates to kids.