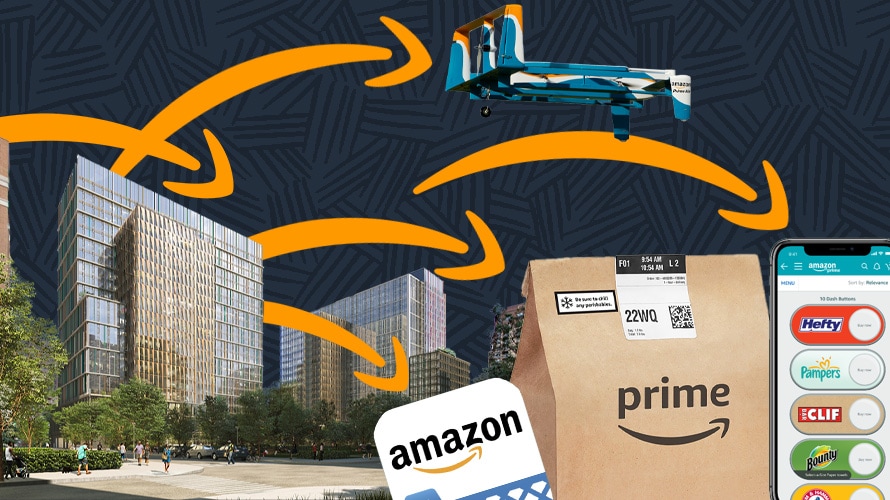 Amazon has certainly had a lot of hits in its 25-year history, from its $14 billion acquisition of grocery chain Whole Foods to its growing advertising business and award-winning TV and film distribution arm Amazon Studios.

In addition to Amazon’s willingness to take big swings, what truly sets it apart from other companies is its ability to dust itself off and get right back in the saddle again after it stumbles. Since the failure of the short-lived Fire Phone in 2014, for example, Amazon has reportedly sold 100 million smart speakers and was once again the world’s top manufacturer of smart home devices in terms of units sold in Q3 2019.

Here’s a look at five headlines from 2019 that demonstrate while Amazon may seem omnipotent at times, it doesn’t always have the Midas touch.

HQ2 was uniquely Amazon in so many ways: The multiyear quest for a second headquarters in the same country as the first, the ever-so humble call for locations to pitch themselves for “as many as 50,000 high-paying jobs” as well as “tens of thousands of additional jobs and tens of billions of dollars in additional investment in the surrounding community,” resulting in sycophantic ploys like New York turning the Empire State Building “Amazon orange,” the mayor of Kansas City reviewing 1,000 products and poor Stonecrest, Ga. offering to change its name to Amazon. And then, of course, the reality show-like drama of whittling the list of candidates down to its inevitable conclusion.

Amazon, as we know, selected New York and northern Virginia in November 2018, but pulled out of the Big Apple in February 2019, citing opposition from state and local politicians over the $3 billion in incentives that lured the platform to the city in the first place. Then, in December 2019, reports emerged that Amazon is leasing 335,000 square feet of office space in Manhattan for 1,500 employees anyway.

Amazon is much more than just a retailer. It is a search engine, an advertising platform and cloud company, to name a few offshoots. But, as of 2019 anyway, it is no longer a provider of restaurant delivery services.

Amazon added restaurant delivery to its repertoire in 2015, delivering from local restaurants in cities like Seattle. Analysts told us it was never much of a player in this space because it wasn’t visible in search results, not many customers used the app, and Amazon lacked the restaurant partners it needed to offer a compelling reason for hungry Prime members to order through Amazon Restaurants instead of Grubhub, Postmates, Uber Eats, etc. After about four years, Amazon officially pulled the plug on June 24, 2019.

Another 2015-era innovation that met its demise in 2019 was the Dash Button, the branded tap-to-reorder button customers could stick around their homes and offices so they were ready and waiting for a friendly nudge whenever a given product was running low. Amazon appeared confident the Dash button would revolutionize shopping and, by 2016, boasted more than 100 brand partners like Bounty, Clorox, Doritos, Huggies, Tide and Ziploc. Consumers, however, weren’t so enthusiastic. Amazon disabled them on Aug. 31. Digital versions of the buttons live on, as do integrations with some appliances.

In another case of try, try again, Amazon is repurposing the Dash button tech in smart shelves for offices that use weight to determine when it’s time to reorder.

In a bit of an overpromise/underdeliver scenario, Amazon proudly showcased its latest Prime Air drone in June and said its “world-class fulfillment and delivery network” would pave the way toward 30-minute drone delivery “within months.”

This was arguably the biggest development in Amazon drone delivery since 2016, except it turned out Amazon didn’t actually have the regulatory approval needed to deliver packages via drone. Instead, Prime Air had a special airworthiness certificate, which allowed it to fly drones for research in authorized areas only. In fact, Wing Aviation, which is part of Google’s parent company Alphabet, was at the time the only drone delivery company with FAA support for package deliveries. (Meanwhile, Chinese ecommerce platform JD.com has been testing drone delivery since 2016 and boasts a network of seven drone types, more than 100 drone routes and over 400,000 minutes of flight time.)

Amazon added nearly 1.2 million new third-party sellers in 2019 alone. And the platform said it has no plans to stop any new sellers from joining as it continues to evangelize its friend-of-small-businesses message.

Small businesses have certainly benefited from being on Amazon, but the influx of sellers combined with what has been criticized as loose oversight has resulted in what the Wall Street Journal uncovered as unsafe, banned and/or deceptively labeled products (and even products sourced from the trash). There have also been a series of problematic listings, like Auschwitz-themed Christmas ornaments and a child’s shirt that said “Daddy’s Little Slut.”

What’s more, brands’ inability to control the customer experience—and prevent other sellers from selling their products, which may or may not be fraudulent—has led big-name brands like Nike to abandon Amazon as a sales channel, although that’s one benefit of being a big brand with worldwide name recognition.

In August, we wondered if the Amazon Marketplace is out of control. As we move into 2020, it remains a legitimate question.