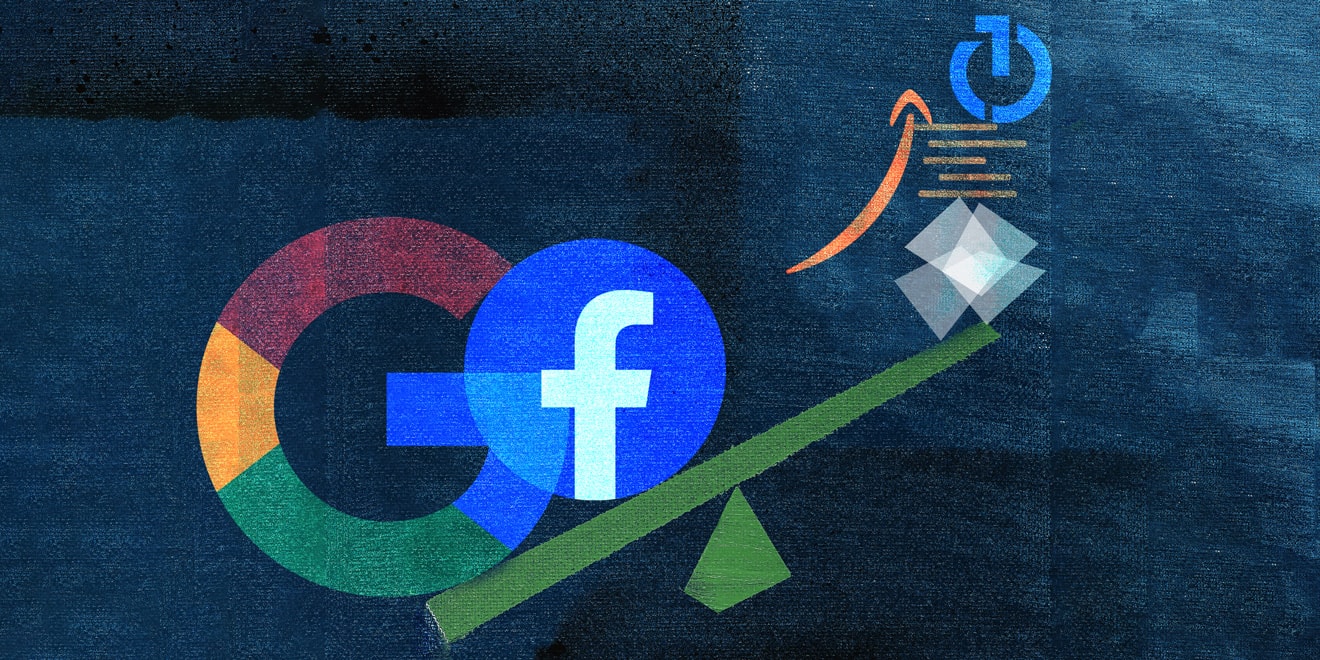 Increased scrutiny of data security is concentrating ad spend in walled-garden companies such as Amazon, Facebook and Google, as their vast swaths of consented first-party data makes them a privacy-compliant means of targeting.

This puts the ad industry in a bind when it comes to effectively targeting online audiences, especially as the walled gardens, under pressure from the public, place more restrictions on how they share data. And that has some seeking alternatives.

The 2010s saw a notable shift in the power dynamics of the ad industry along with the rise of digital. In a seismic shift, Big Tech—Facebook, Google and, increasingly, Amazon, which eMarketer forecasts will collectively pocket nearly 70% of all U.S. online media budgets ($151.29 billion) next year—became the dominant force on Madison Avenue.

The three companies grew to dominate advertisers’ budgets because of their ability to collect huge swaths of data across different devices. That improved marketers’ campaign planning, implementation and measurement capabilities. And since Google and Facebook possess more logged-in, authenticated data than anyone else, it made them the power brokers of the industry, a throne formerly occupied by agency holding groups.

The (unintended) consequences of backlash

However, it was the availability and use of such data that proved controversial. As the decade progressed, a growing public awareness of the privacy trade-offs involved with financing free or ad-funded online content led to regulatory backlash epitomized by the impending California Consumer Privacy Act. That has been accompanied by regulatory crackdowns around the globe and laws evidently conceived to curb the influence of Big Tech. Regulators in Europe recently opened an investigation into Facebook and Google over how they use data. Lawmakers there also preempted their U.S. counterparts with the May implementation of  the General Data Protection Regulation.

Although, the nature of the consent requirements at the core of such regulation has only served to aid the business models of platforms, like Facebook and Google, that require people to sign in and consent to having their data shared with approved business partners.

Scrutiny has provided a jolt to the system. Google, which is by far the biggest targeting platform by spend courtesy of both its buy- and sell-side ad-tech stack, has implemented several data restrictions dating back to May 2018 in preparation for GDPR. And as the U.S. prepares for the implementation of CCPA, Google and duopoly cohort Facebook continue to put advertisers in the uncomfortable position of permitting walled-garden providers to effectively mark their own homework.

Speaking with Adweek, eMarketer analyst Nicole Perrin pointed out that Amazon’s relatively fledgling offering is quickly winning ad spend from the duopoly, even as it operates as a walled garden in its own right.

She did point out, however, that total digital spend percentages are skewed by the long tail of advertisers (such as local businesses and mom-and-pop stores), most of which target small, local campaigns, whereas large-scale advertisers are more diverse in how they source.

“My suspicion is that larger advertisers are relatively less concentrated in the top three,” Perrin said. “When I hear from [advertisers], it’s kind of with a little bit of angst.”

Perrin went on to describe conversations she has had with media buyers who point toward an inverted power dynamic whereby the walled-garden providers are able to get away with lapses that traditional media owners would not, simply because of their scale.

“From even the large advertisers that I talk to, they feel a little bit trapped,” Perrin said. “ … They feel uncomfortable with some of what happens on these platforms [such as brand safety flare-ups] or uncomfortable with just the possibility of prices going up because of market capture and stuff like that. But they feel like they can’t leave as this is where consumers are.” 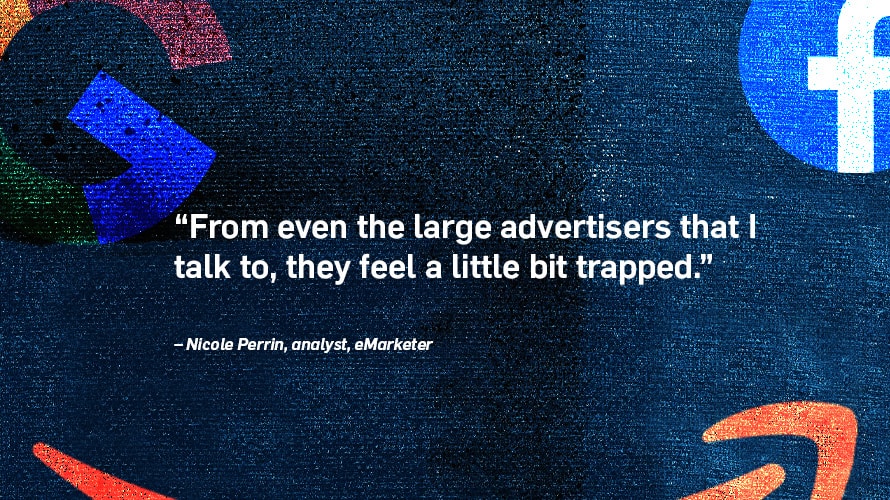 A recent Zenith Global Intelligence report highlighting how changes in the reporting of ad auction placements on Google AdWords would lead to cost increases laid bare the extent of this vulnerability.

In short, the rollback in September of its paid-search average position metric has meant brands can no longer see the context in which their ads appear. “It’s
likely that advertisers will have to increase costs, disproportionately pushing for a higher impression share, without a corresponding increase in attributed sales,” the report reads.

De-risking from the duopoly

However, media buyers and independent ad tech, both buy- and sell-side, have made attempts to reduce their reliance on the industry’s biggest names.

“A lot of the agencies are constantly evaluating where investments are going, and asking what exactly do they get in return,” said one media agency source, who requested anonymity because Big Tech is a client. “To make sure we’re not just consolidating into those two partners, we’re always trying to find the partners, vendors or publishes that we can work with that can replicate the output of those types of companies.”

Recent years have seen several such initiatives led primarily by the independent ad-tech sector with the Advertising ID Consortium, The Trade Desk’s Universal ID push plus Prebid on the industry’s sell side.

Rubicon Project CTO Tom Kershaw, who’s also co-founder of Prebid, said publishers want to reduce their reliance on companies such as Google both in terms of ad spend and software.

“Things have changed over the last two years, as people want to take control of their actual tech stack. A lot of the advertisers want to have full visibility into the processes of how things are working, such as how they run,” he explained. Speaking recently with journalists, Nestlé’s global head of sales and ebusiness, Sebastien Szczepaniak, said his company demands more transparency from some of the industry’s biggest suppliers, namely Amazon and Google.

These are “based on the standards we want to get from them,” he told Adweek, adding that the right level of transparency has to be on offer for them to continue trading with them, even if it does result in some level of friction.