2.1 Billion People Use Facebook’s Family of Apps on a Daily Basis 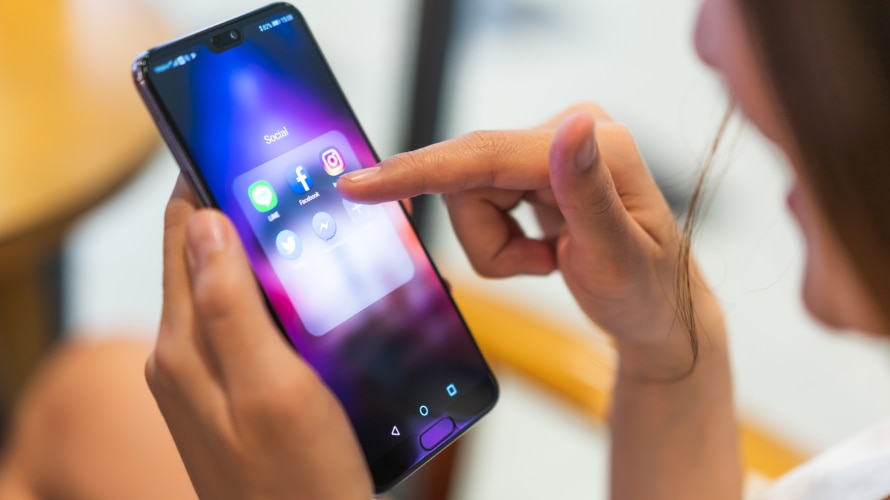 The $5 billion fine Facebook agreed to pay to the Federal Trade Communications in a settlement over privacy issues had no bearing on the company’s second-quarter financial results, which were reported earlier this week. 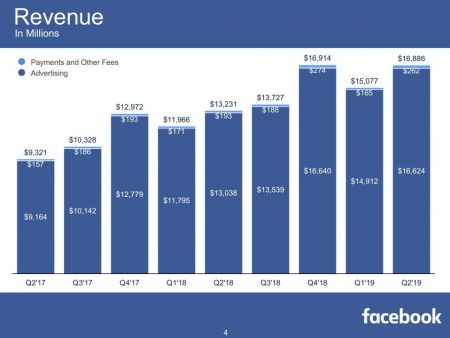 Chief financial officer David Wehner said in his opening remarks during Facebook’s earnings call that in terms of regional ad revenue growth, North America and the Asia-Pacific region led at 30% apiece, followed by Europe at 21% and rest of world at 21%, adding that the latter was impacted by currency headwinds. 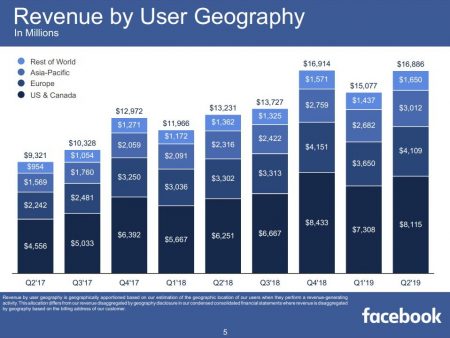 The company’s net income fell 49% year-over-year, to $2.616 billion from $5.106 billion. Facebook cited a $2 billion accrual in connection with its FTC settlement, as well as a cumulative income tax expense of $1.1 billion due to the Ninth Circuit Court of Appeals’ reversal of a U.S. Tax Court decision regarding the treatment of share-based compensation expense in a cost-sharing arrangement.

Facebook said over 2.1 billion people now use its family of applications—Facebook, Instagram, WhatsApp and Messenger—on a daily basis, and more than 2.7 billion do so on a monthly basis.

Facebook reported an average of 1.59 billion daily active users at the end of the second quarter, up 8% compared with the year-ago period. Wehner said gains in India, Indonesia and the Philippines helped drive growth. 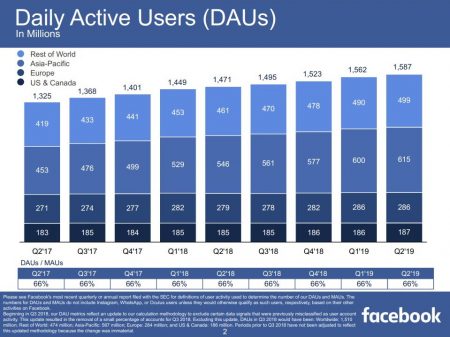 The social network had 2.41 billion monthly active users at the end of the quarter, up 8% year-over-year. 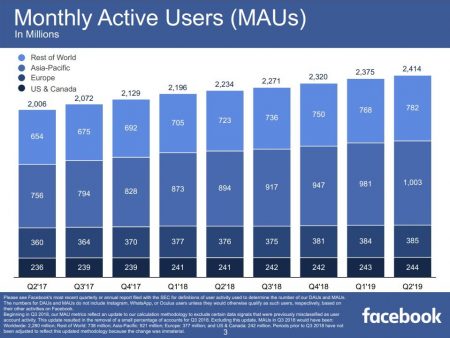 The shift in advertising on the social network from News Feed to Stories was discussed frequently during the company’s earnings call.

Chief operating officer Sheryl Sandberg said during her opening remarks, “Consumers often adopt new technologies first, and our competitive advantage is helping advertisers reach people where they are. We helped businesses make the shift to mobile, and now we are helping them shift to Stories, video and eventually messaging. We know that it’s not enough to make these new formats available. We also need to make it easy for advertisers to create effective ads. We do this by launching new ad products and by improving our existing ones to deliver more value for people and advertisers.”

She did not discount News Feed ads, saying, “We’re constantly making incremental improvements to Facebook feed ads. This quarter, we improved how quickly we refresh the ads people see. In the past, these ads were pre-selected at the beginning of a feed session. Now, the ads are refreshed while people are scrolling through their feed. This means people get more relevant ads, which improves engagement and delivers a better return on investment for advertisers.”

She expanded on Stories ads during the question-and-answer portion of the call, saying, “One of the most important things we learned as we were doing this transition to mobile is that if we made it easier for our advertisers to place the ad, to make sure they understood the measurement they were having, and also to make sure the ads format worked, businesses would move more quickly. Usually, people move before businesses, so people moved to mobile before businesses, and we certainly saw the same with Stories. But I think one of the successes you’re seeing that we’re having right now is that we are helping people move to Stories more quickly because of the lessons we learned.”

Sandberg continued, “So, for example, automatic placements: What automatic placements do is they convert feed ads into a Stories format and deliver the ads wherever they get their best results. And I think product innovations like that have gotten us to 3 million advertisers across the three properties we have available—Facebook, Instagram and Messenger. Rather than going to every advertiser, both through our sales force and our online tools where we sell, and saying, ‘We have a new format, you need to create the new format, you need to figure out the placement,’ being able to just take what they are already doing, like feed ads, convert it into Stories and place it anywhere helped us to move people into these formats.”

She concluded, “It’s also the case that we have a lot of inventory on this. There’s a real benefit right now for early adopters: Pricing is very attractive. So, we think the mix to Stories is a big opportunity for us and advertisers over time. I’ll say one more thing, which is that Stories don’t monetize right now at the same rate as News Feed. We are optimistic about the growth over the long run, but we are, as always, very prudent and careful on the consumer experience.”

In response to a question about the pricing gap between News Feed ads and Stories ads, Wehner said, “I think we’re certainly making progress in terms of growing Instagram Stories demand. But we’re also growing Instagram Stories supply very quickly. I think those are going to continue to both grow nicely, so I think we feel like we’re making progress on the important front, which is getting more demand in for Stories from advertisers. And then I think there are going to be puts and takes as to whether that’s going to play through in price or just overall revenue growth. But we’re making some progress there. But Stories is growing very quickly on the impression basis, which is always going to mitigate your growth on price when you have a fast-growing impression driver like Stories.”

He continued, “The broad statement that I would say is that in terms of Facebook and Instagram feed, we’re at a place where there are not as many opportunities to grow ad load going forward. And I think where you have opportunity is in an area like Stories, where we’re seeing stronger overall engagement growth and it has a lower effective ad load today. I think we’ll continue to see the impression growth opportunities be skewed toward things like Instagram Stories and Facebook Stories. There are still incremental opportunities to grow feed impressions, and we saw feed impressions grow this past quarter on both Instagram and Facebook. But I think you’re going to see more of the opportunity—from both an engagement and usage point of view and ad load point of view—be in areas like Stories.”

Wehner was also asked about the effects of rules for political advertising that Facebook has implemented over the past year or so on revenue.

He replied, “As you know, we’ve put a lot of controls in over political advertising, such that we have to verify identity of people who are advertising for political campaigns. And that produces friction in the process. Political advertising is not a big, big category, although it is obviously highly seasonal and highly year-dependent, so it can have some impact on revenue growth in bigger political years. But it’s still a relatively small category. And we’ve put a lot of investment and controls in over it, so that’s part of the work that we do on the contractor side, in terms of putting a lot of ads through review. So, it’s a fairly costly process, but as you said, it is part of what service we’re providing. And so, we’ve put a lot of investment there, and the revenue there would be seasonal.”