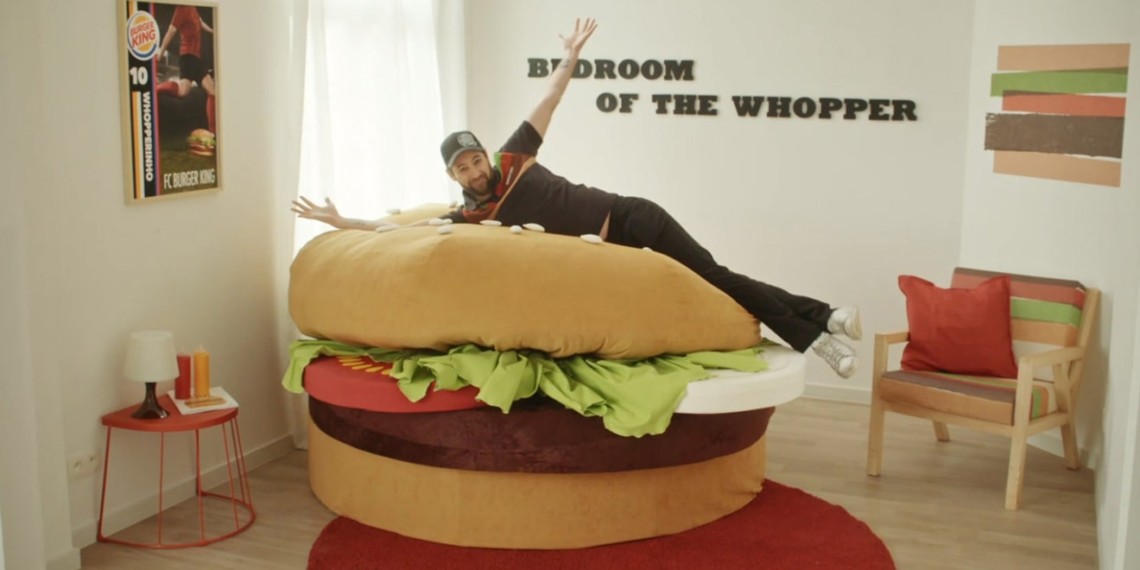 Have you ever dreamt of living above a Burger King? Cozying up in a bed that’s fashioned after a giant Whopper, wrapped up in lettuce leaf blankets and cheese?

Burger King Belgium’s new ad campaign by Buzzman, which launched this week with a 60-second spot, is offering one lucky Whopper the opportunity to live rent-free for a year above a new Burger King restaurant in Leuven, Belgium. The 742-square-foot flat, full of Whopper-themed furniture and decor, has been dubbed “The Home of the Other Whopper.”

The spot opens with a shot of the new restaurant with the Burger King banner calling it the Home of the Whopper. But then the narrator asks: what if there’s another Whopper? The camera zooms out to a flat above the restaurant complete with branded furniture in every room—except the kitchen (since there’s a restaurant downstairs). There is, of course, a kitchen in the actual flat. “But it has to be the most useless kitchen ever,” said Buzzman creative director Tristan Daltroff.

Burger King has only been in Belgium for two years, Daltroff said. BK wondered if there already is a Whopper in Leuven, and doesn’t that person also deserve a home? In thinking about making the brand a household name, a Burger King apartment was born.

The rules require the winner to be a Belgian citizen.

Burger King opened its first Belgian restaurant in 2017 and now has 35 locations in the country.

The rules require the winner to be a Belgian citizen. But Daltroff added those rules might need to bend—anyone can apply by messaging Burger King Belgium on Facebook, but they’ll have to show official paperwork to prove that they are really named Whopper.

While Burger King hasn’t gotten a response from any Whoppers yet, some fans have been pledging to change their names legally. The brand plans to announce the winner on Dec. 18.

Since global CMO Fernando Machado joined Burger King in 2014, the brand has taken on a more competitive and relevant spirit while employing some serious, tech-savvy creativity.

The flat above the Burger King is located in Leuven, Belgium.
@klundster kathryn.lundstrom@adweek.com Kathryn Lundstrom is Adweek's breaking news reporter based in Austin.