Themed hotel rooms are becoming a trend in the travel world 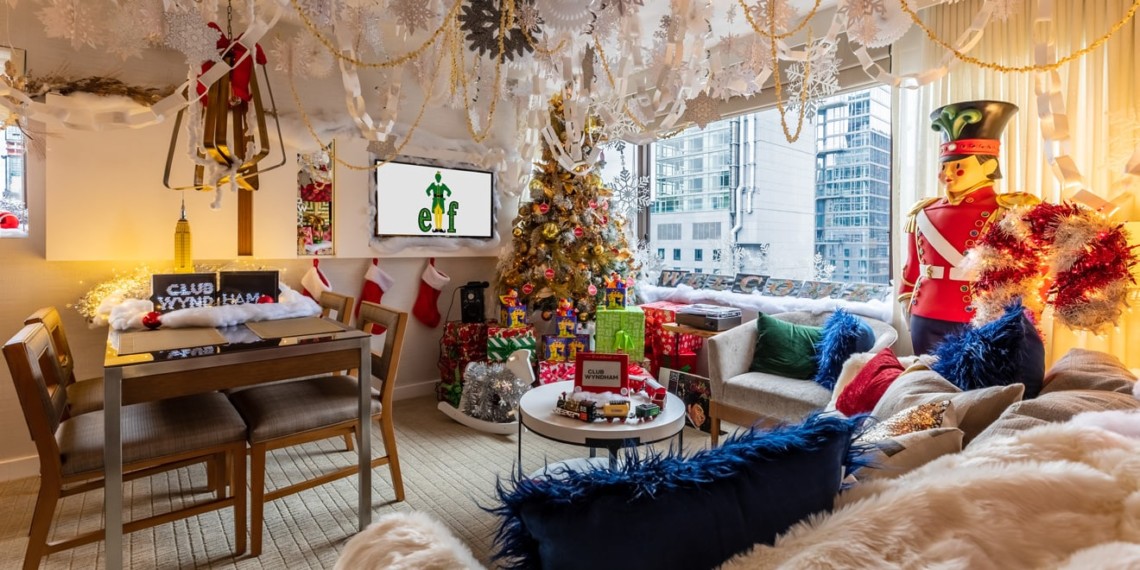 If you’ve ever wanted to recreate the scene in the classic holiday film Elf where Buddy pours maple syrup, candy and Pop-Tarts on spaghetti and eats it with his hands, Club Wyndham is giving you the chance.

The vacation club is set to open a suite themed around the Christmas comedy starring Will Ferrell at the Club Wyndham Midtown 45 property in New York, complete with over-the-top festive decorations and sugary treats. Beginning Nov. 25, the suite will be available to book for stays from Dec. 2-26, with Dec. 21-26 available exclusively to Club Wyndham members.

Noah Brodsky, chief brand officer for Wyndham Destinations, said the Elf-themed suite is part of the brand’s mission to “inspire families to live their travel bucket list.” The brand chose New York for the activation as the city is a popular holiday destination—and the setting of the 2003 film.

‘The movie’s storyline synced up nicely with Club Wyndham’s offerings,” Brodsky said. “Our vacation club suites provide all of the amenities of home, so we were able to activate in multiple spaces, like adding a full-size tree in the living room, decking out the suite with Buddy’s favorite toys, and creating a dramatic impact with over-the-top paper snowflakes that adorn the ceiling across multiple rooms.”

The travel brand worked with event design company Patrick J Clayton Productions to transform the suite, which welcomes guests with a door wrapped in a green elf jacket. Along with paper snowflakes and a tree, the suite’s interior includes a Lite-Brite welcome message, paper and popcorn garlands hanging from the ceiling, a nutcracker, stacks of presents and a colorful gift wrap mural wall. Club Wyndham partnered with Warner Bros. to use the film’s official logo.

The decor also extends to the bathroom with green and red tinsel, a giant red ribbon on the shower door and bath bombs resembling snowballs. The family-friendly suite, which sleeps four guests, will also have Etch A Sketches, toy trains and a replica of the Empire State Building. Evoking the film, the suite's kitchen is stocked with an variety of candy, pasta, Pop-Tarts and soda.
Wyndham

Guests who reserve the suite will receive free admission for up to four people to the Empire State Building and Rockefeller Center observation decks. The suite is available to book through Club Wyndham’s website, with rates starting at $399.

The Elf suite, which is Club Wyndham’s first themed room, is the brand’s latest effort to engage with club members and guests in a memorable way, according to Brodsky. Earlier this year, the vacation club celebrated National S’mores Day with a campaign that featured “grahambassador” Patrick Renna and complimentary s’mores at select resorts.

Club Wyndham is also slated to debut a culinary series by the end of 2019, which will tap regional chefs to provide recipes for guests to make in their rooms through a series of videos and social posts.

Creating temporary themed hotel rooms is becoming a trend in the travel world. For Halloween weekend, Warner Bros. recreated the Addams Family mansion in Brooklyn, while Hotels.com launched a rentable Lisa Frank suite in a Los Angeles penthouse for the month of October.