Controversy aside, it's a big win for the designer

Last week, right after Team U.S.A. took to Twitter to release a photo of what its 2016 Summer Olympics uniforms would look like, the pundits pounced. Their fashion sense was offended, apparently, by the effect created by the way the Navy blazer (designed, along with the rest of Team U.S.A.'s gear, by Ralph Lauren) closed over the red, blue and white-striped crew neck beneath. It looked, cried the offended, like the Russian Federation's flag. 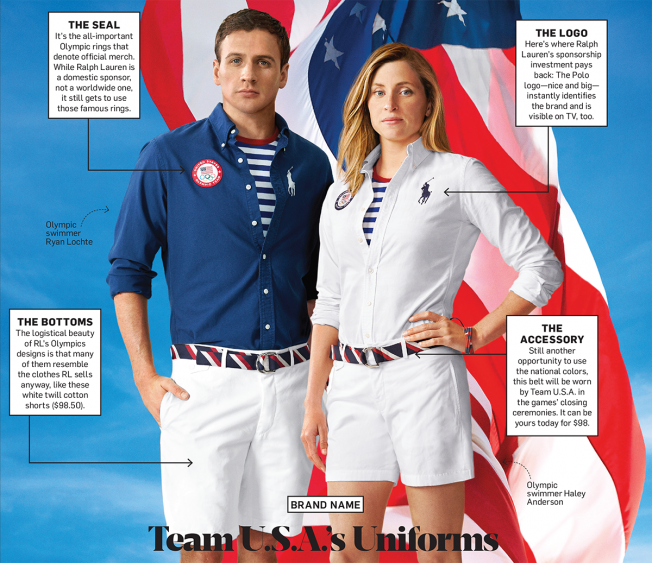 "R we cheering for #Russia since our uniform contains the #Russian flag?" pondered one grouser on Twitter. Another opined that the American team's uniforms must have been Kremlin-approved.

And we laughed. But again, it really wasn't Ralph's fault. After all, there's only so much that can be done with a red, white and blue color scheme. And just for the record, there are 21 countries whose flags share those colors, including France, Nepal and Cuba.

And how'd all this go down at Ralph Lauren headquarters? We don't know, but here's a wild guess: They probably don't care. And they shouldn't. Because the contract to design Team U.S.A.'s uniforms—one that Ralph Lauren has had a lock on for five Olympics now—is one of the best gigs a brand can get. 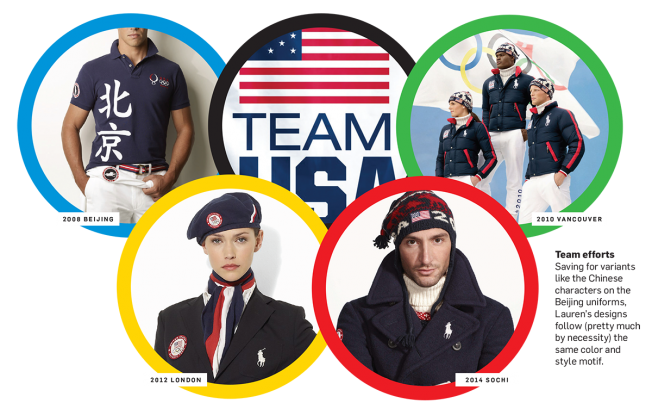 "This is a brilliant marketing strategy that's worked well for them since 2008," said Chuck Gilman, CEO of Gilman Licensing Associates, which has worked with brands including Timberland, DKNY, Lucky, and Under Armour. "Why do they do it? For the exposure on TV all over the world. It's quite possible that they'd pay less for an Olympic license than for a 30-second Super Bowl ad—and the exposure is greater." 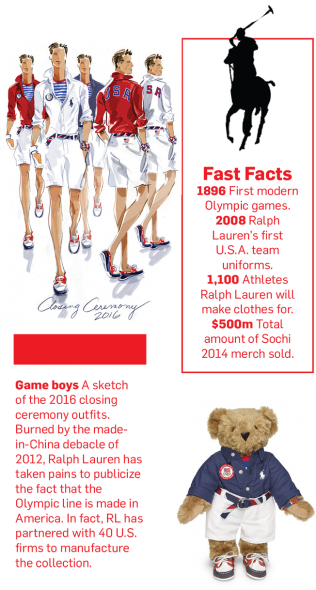 No kidding. When Team U.S.A. marched into Maracanã Stadium wearing their Ralph Lauren threads, an estimated 3 billion people were watching on their TV sets. For the Beijing Olympics, the audience was 4.7 billion—roughly two-thirds of the planet. Can you get better exposure for a brand? Uh, not really.

Gilman also points out that outfitting the American team is a perfect brand extension for Ralph Lauren, who's been using the Stars and Stripes as a favored motif for years now anyway and has built his entire business on reprising the classic American Ivy League look. "If there's any world-recognized brand associated with America, it's Ralph Lauren," Gilman said. "And it's brilliantly executed at all levels.

Well, almost. There was that embarrassing little problem with the London Games in 2012: Team U.S.A.'s uniforms had been manufactured in China. The brand quickly fixed that. (Hickey Freeman, one of RL's 40 partners, sewed this year's duds in Rochester, N.Y.)

And what about the actual sales of the Team U.S.A. items—that $65 hoodie or $165 team polo? Sure, some people will buy them, but "sales of those product don't really move the needle for a $7.5 billion brand," Gilman said. "Basically, Ralph's reason is marketing, marketing, marketing."