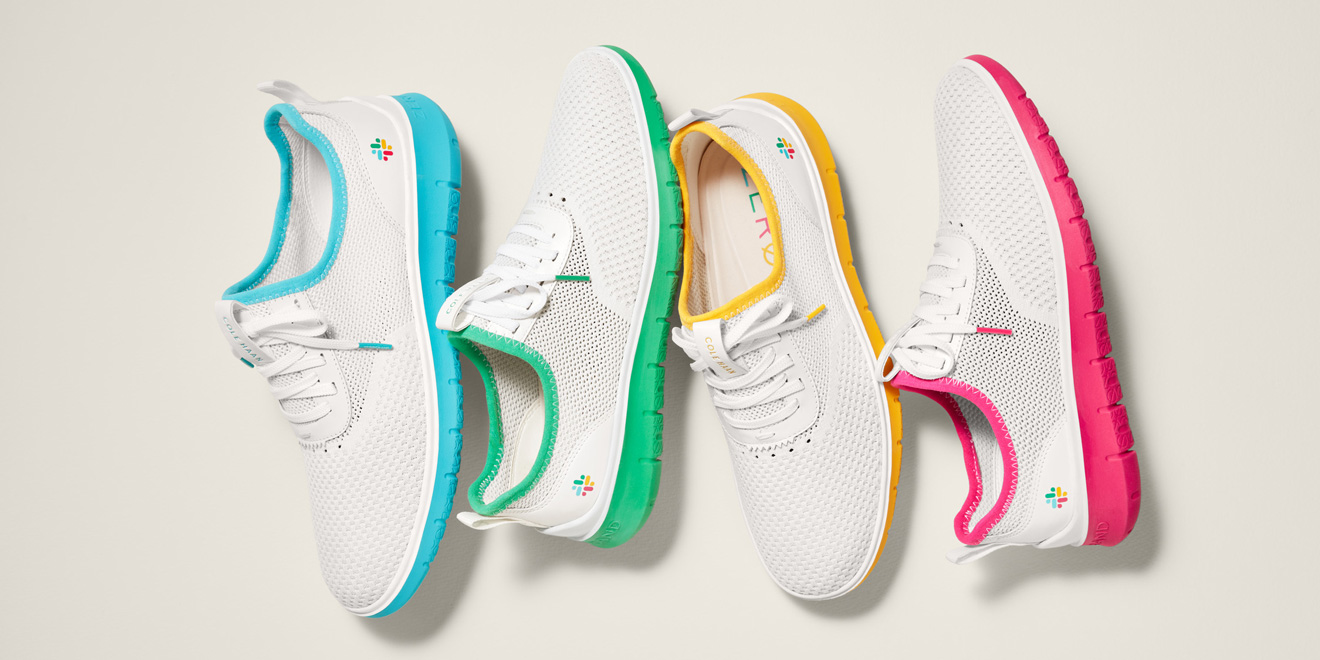 Built on the lightweight ZeroGrand platform, the limited-edition Slack collaboration features the app's brand colors and retails for $120 a pair. Cole Haan, Slack

Like an estimated 638,000 other corporations out there, Cole Haan uses the instant-messaging app Slack to do what it does—which, since 1928, has been designing stylish footwear suitable for the office.

Of course, many white-collar professionals have been absent from the office for a good six months now, a fact that’s been a kick in the shins for the dress-shoe segment, which suffered losses as high as 70% this summer, according to NPD. Fortunately for Cole Haan, it’s no longer just a dress-shoe brand. Its strategy has been nudging the product mix decidedly toward casual and athletic shoes for a several years now. And, for the sake of Americans who want to wear something truly different on their feet, Cole Haan has used its fondness for Slack to create its latest offering.

Debuting this week is the Cole Haan x Slack Collection, a limited-edition line that, as the name suggests, marries the world of footwear with the realm of instant digital communications. (Well, in terms of design, at least.) The collection features four mostly white athletic shoes with a choice of four sole colors, each in one of the hues of Slack’s corporate logo. The Slack logo also dots the quarter, just above the heel. Price: $120.

“Nearly everything we at Cole Haan do happens on the world’s favorite channel-based messaging platform,” announced the brand’s website. “We’re celebrating this integral partnership with four exclusive color schemes—designed with the Slack crew, over Slack.”

Left unanswered by that spiel, however, are a couple of key questions. Notwithstanding the many merits of cobranding, why would an upmarket footwear brand want to design a shoe with the tech bros from a chat app? And, for as logo-conscious as many fashion-forward consumers are, is the Slack logo really one they’re pining to wear?

Cole Haan brand president David Maddocks is realistic about that one: probably not. “But they do think passionately about the work that they’re doing, and the ideas that they’re sharing over the platform,” Maddocks told Adweek.

Meaning: Slack is cool because it represents the creative process, not solely because it’s, you know, Slack.

“Our brand tries to encourage everyone who comes across it to live an extraordinary life. And, so often with young people, that looks a lot like the work they’re doing and the ideas they’re putting into the world—and that’s happening over platforms like Slack,” Maddocks explained.

The idea of young people is pivotal in that statement. Cole Haan has been busying itself with speaking to a younger demographic as part of a corollary effort to move the brand away from its historical trappings of dressy shoes in favor of becoming a lifestyle brand. “We opened up the market in casual, outdoor and sports,” Maddocks said. “But we also introduced the brand to a new generation of consumers. And now, more than 40% of our customers are below the age of 40. So, this isn’t your father’s Cole Haan anymore.”

In a functional sense, the brand’s drift toward younger customers and less-formal styling began with its split from Nike. The athletic-wear colossus bought Cole Haan in 1988 for $80 million, then sold it to Apax Partners in 2012 for a cool $570 million. During the period of Nike’s ownership, Cole Haan’s dressy shoes got a lot easier to wear because they featured Nike’s Air soles. Cole Haan has been moving in the comfort direction ever since. In 2016, for example, it introduced GrandRevolution oxfords sleek enough for dinner at the University Club, but with the feel of sneakers. More recently, it’s simply embraced sneakers, period.