After selling out quickly last year, they're now on Walmart.com

Did anyone ask for this? Probably not. And yet KFC’s fried chicken-scented firelogs still sold like hotcakes last year when they made their debut.

After the 2018 batch of “11 Herbs & Spices Firelogs” sold out in three hours, the brand decided to bring them back in a bigger way for 2019. Now available for $18.99 on KFCFirelogs.com, the logs—which smell like chicken but aren’t made from chicken—are being sold via Walmart.com with free two-day shipping.

“Last year, we captured the hearts, noses and fireplaces of our fans, but thousands more were clamoring to get their hands on our limited firelogs,” said Andrea Zahumensky, U.S. CMO of KFC, in a statement about the product’s return. “So, we brought our 11 Herbs & Spices Firelogs back with an exclusive partnership with Walmart to spread the finger-lickin’ good cheer.”

The firelogs, developed by agency Edelman, are made in partnership with Enviro-Log, which crafts them from 100% recycled wax cardboard. The microsite helpfully warns buyers that the firelogs “may attract bears or hungry neighbors.” 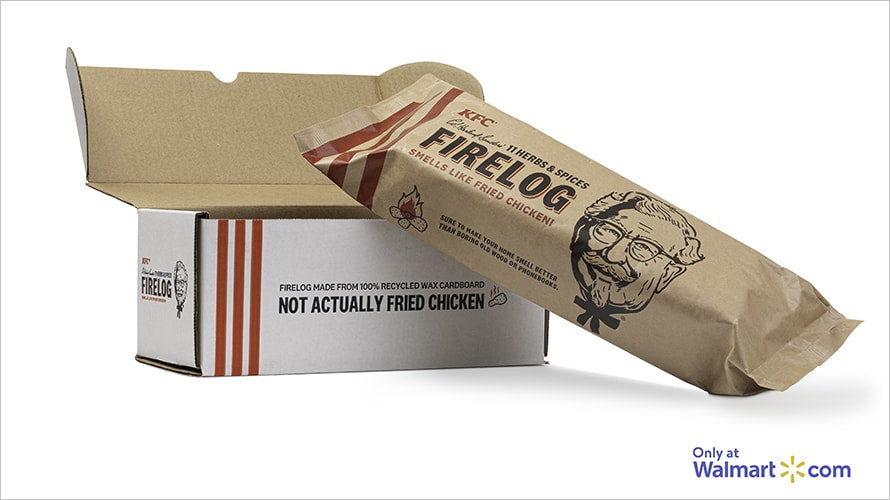 KFC has become quite the dabbler in scented products in recent years. In 2016, the chain offered up chicken-scented sunscreen, peddled by “Extra Crispy Colonel” himself, George Hamilton, the same year that the brand’s finger-lickin’ nail polish was introduced in Hong Kong. Earlier this year, agency Mother brought the glorious aroma of comfort food to U.K. homes with the KFC Gravy Candle.