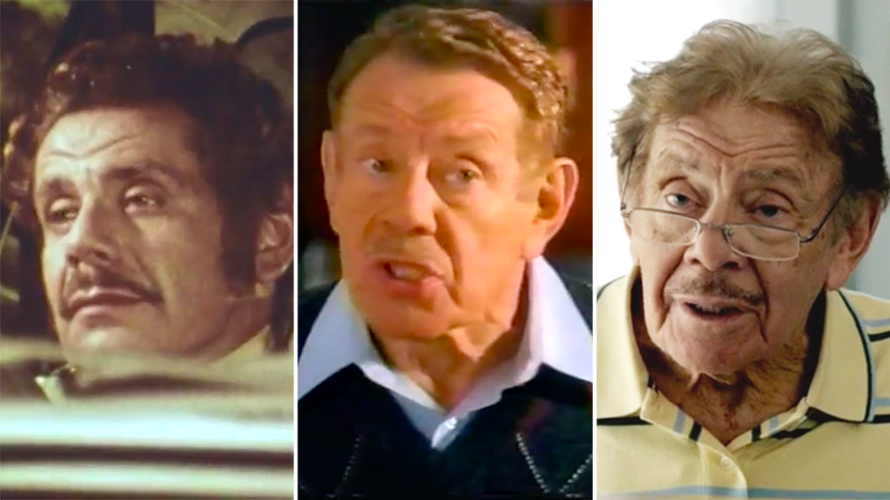 From left, Jerry Stiller's ad appearances in a seat belt PSA, an AOL ad and an air conditioning spot.

While Jerry Stiller is best known to modern audiences as Seinfeld’s Frank Costanza, the actor had a long career on stage and screen, and commercials were no exception. From the 1970s on, he was often found voicing or starring in ads, especially after his popular resurgence with the 1990s success of Seinfeld.

Today, the actor’s son, Ben Stiller, announced on Twitter that Jerry Stiller has died at age 92. He was preceded in death by his wife and longtime comedy partner, Anne Meara, in 2015.

Thanks to the popularity of their standup and variety routines, Stiller and Meara starred together in several ad campaigns in the 1970s and ’80s, beginning with a popular radio campaign for Blue Nun wine that was hugely successful for the winery—and helped establish agency Della Femina, Travisano & Partners (today called Della Femina Advertising).

The pun-heavy campaign featured charming banter and frequent ad-libbing from Stiller and Meara, who met as young struggling actors and remained married for more than 60 years until Meara’s death.

Their success in radio advertising paved the way for many more appearances by Stiller and Meara, including in a series of PSAs about the importance of using seat belts—which had only become mandatory for car manufacturers in 1968, followed by inconsistent and staggered regulations for drivers and passengers.

Stiller and Meara appeared in several more ads together, including work for Citizens Committee for New York City (a volunteering group to boost civic life launched amid the massive cutbacks and poverty of the 1970s), Jack in the Box and Windex.

As the duo’s career declined in the mid-1980s and their attempt at a TV sitcom, The Stiller & Meara Show, failed to get off the ground in 1986, their ad appearances became less frequent.

All that changed in 1993 when Stiller joined Seinfeld, then in its fourth season, to play the part of George Costanza’s father, Frank. Coinciding with the rising success of their son, Ben Stiller, the part put Jerry Stiller back into the pop culture spotlight and marked his return to being a frequent face in TV advertising.

In 1995, AT&T made Seinfeld characters Frank and Estelle Costanza (played by Estelle Harris) part of its advertising by featuring the fictional couple in a TV spot.

The next year, Stiller landed one of the biggest roles of his ad career. Nike and Wieden + Kennedy cast Stiller to play the ghost of legendary Green Bay Packers coach Vince Lombardi. In the ads, Lombardi’s spirit opines on the era’s rising stars, including Deion Sanders, Reggie White and Kordell Stewart.

Wieden + Kennedy would cast Stiller again in 2003 after winning the AOL account. Appearing alongside rapper Snoop Dogg, Stiller was the brand’s spokesman for a classic bit of self-mockery marketing as we see a couple assembling their many unwanted AOL discs into a piece of wall art.

Stiller appeared in many more commercials for a wide range of clients, including Total cereal, Glad Cling Wrap, Marriott and Nissan.

In 2010 and 2011, he also became one of Capital One’s celebrity spokespeople, appearing in several spots for the bank and its credit cards.

In one of his last ad appearances, Stiller also starred in a 60-second ad for Mitsubishi Electric Cooling and Heating, which had him wage a comedic feud against himself.

Advertising has always had a penchant for straight-talking, relatable characters who help balance the unapproachable glamour of A-list celebrities. Such roles require a tough mix of being grumpy but also likable, which Stiller managed to bring consistently to his work across five decades.