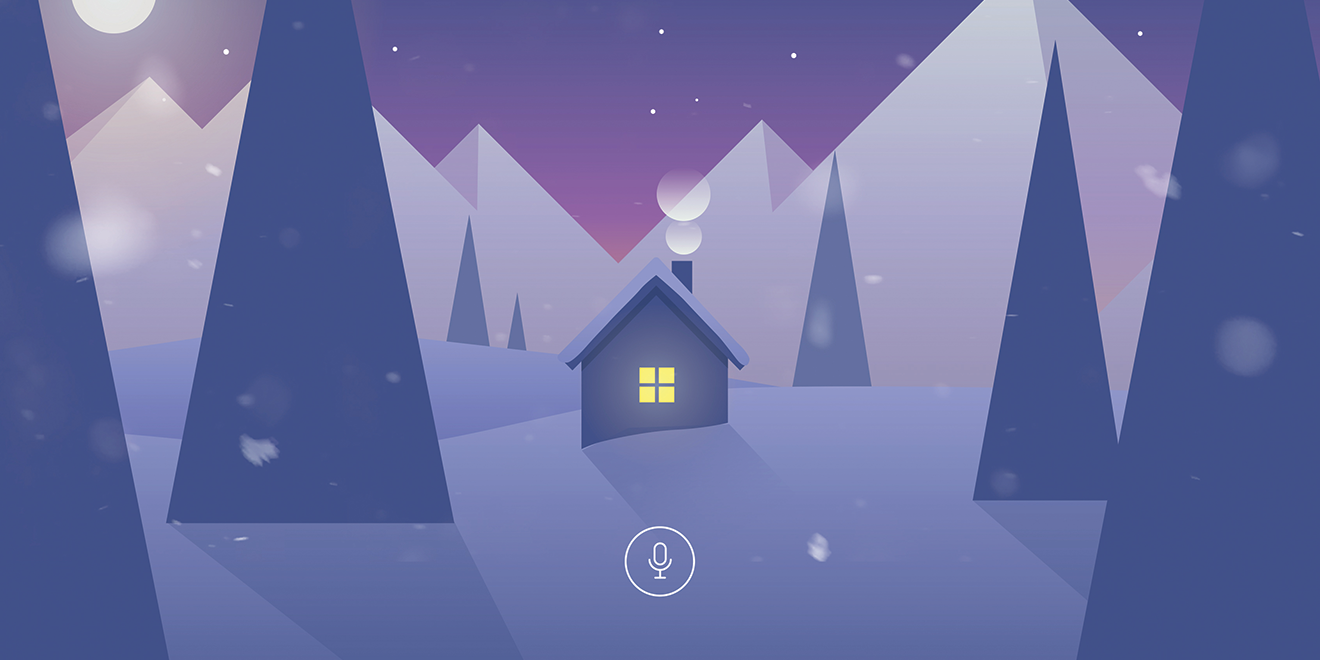 In our complex, hyper-connected and fast-changing world where media, marketing and technology converge and mingle more every day, you don’t have to create “genius” campaigns in order to cut through the clutter. But if you do, it sure helps. Which brings us to Adweek’s fifth annual Project Isaac Awards, a celebration of novel notions that obliterate boundaries and exceed expectations to bolster brands and, in some cases, advance social causes close to their creators’ hearts.

This year’s Gravity Award winner, DigitasLBi’s “Care Counts” initiative for Whirlpool, seems especially apropos and genre bending, “promoting” washers and dryers in the best way possible: donating them to school systems so that disadvantaged kids can have clean clothes and stop cutting class. (Read the Gravity Award winner story here.) Along with portraying Whirlpool in the best possible light, the program is having a quantifiable positive impact in people’s lives. Such themes unite our Isaac winners. They’re a diverse lot, but all of them work smart and hard, leveraging insight and data to transcend the one-size-fits-all definition of advertising and expand each brand’s footprint in relevant, exciting ways. 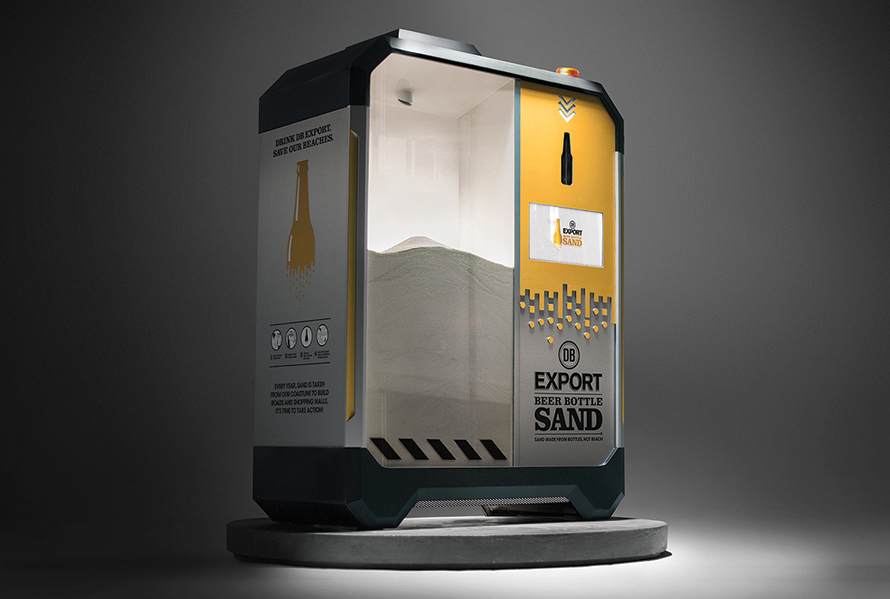 With sand used in everything from construction to pharmaceuticals, beaches are being depleted at an alarming rate. To address the problem in New Zealand and build buzz for its brew, DB Export dispatched a machine to local bars that lets drinkers instantly crush used bottles into a sand substitute for industrial applications. The machines got plenty of play on social and mainstream media, helping DB enjoy volume growth in a category that declined 6 percent. “At the heart of DB Export’s DNA there’s a motivation to get stuff done,” says agency business director Brodie Reid, “and at the heart of our drinkers’ DNA there’s a desire to do good in the world. So, merging the two together helped create a higher purpose that people can rally behind.” 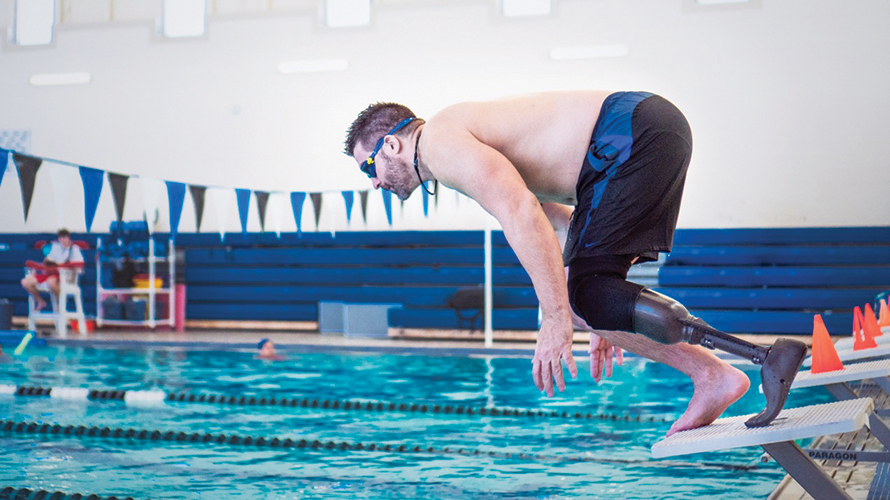 Here’s a stroke of IP genius from J. Walter Thompson and Northwell Health. It’s called the Fin, a prosthetic that lets amputees quickly and easily transition from walking to swimming. Created to showcase Northwell’s passion for innovation and commitment to serving veterans, agency and client spent five months developing a 3-D printed prototype made of carbon-fiber-enhanced nylon.

This was done in consultation with ex-Marine Dan Lasko, who lost his left leg 13 years ago in Afghanistan. Lasko put the Fin through its paces, and his feedback led to various technical tweaks. He also served as pitchman, appearing in JWT’s promotional push, which encompassed digital content, social posts and PR. Next up: “Clinical trials where we will refine the Fin with the help of six service members,” says Northwell chief marketing and communications officer Ramon Soto.

“We are also talking with veterans organizations, the VA and development partners to build the right manufacturing and distribution model.” One key takeaway, per Boston University marketing professor Judy Austin, is: “Don’t look before you leap. For audacious undertakings like this one, the prospect of failure is a constant,” but shared focus and determination can ultimately pay off. 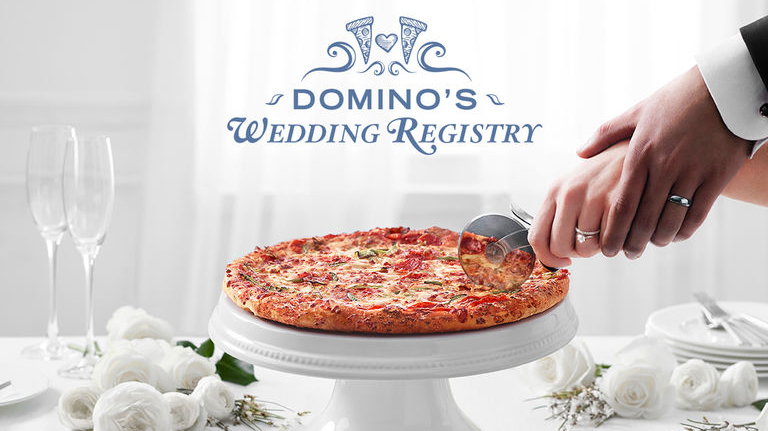 Dearly beloved: “The challenge was to make Domino’s a part of every couple’s big day,” says CP+B account director Jacqueline Redmond. “The solution was a site that fulfilled people’s innate desire to get a wedding gift they really want.” Among its many cheesy marriage-related options, the cheeky venue lets users cater their friends’ bachelor and bachelorette parties and supply pies for piping-hot wedding-night sustenance. Since launching in February, the platform has received more than 1 billion media impressions and nearly 400,000 site views. About 3,500 registries have been created, with total registration for pizza topping $900,000.

“Let me show you the Volvo that saved my life.” That potent pitch was invoked by one of several Volvo crash survivors who served as guest sales agents at Miami-area shopping-mall booths. “Dealerships usually try to approach potential customers with offers and features,” says We Believers creative chief Gustavo Lauria, “but the human approach we used was key to closing deals and generating numbers for our client.” All told, mall-stand visits rose 60 percent, and three out of 10 consumers who chatted with the survivors took test drives. 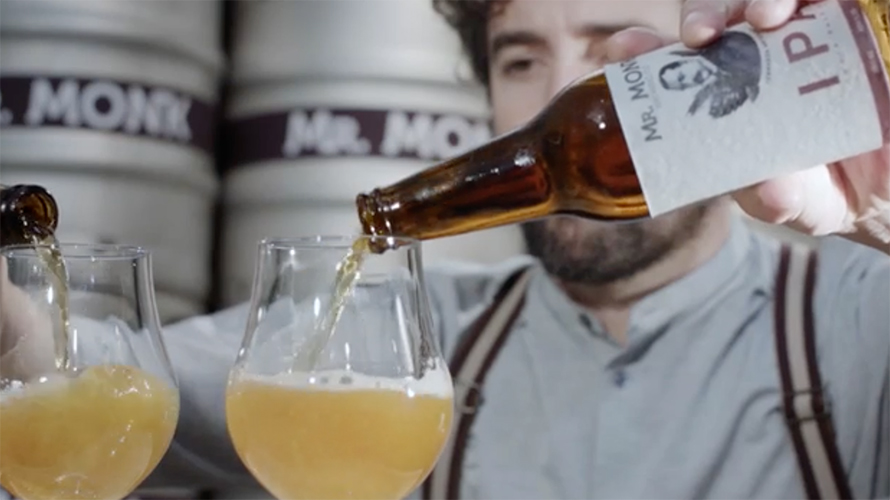 Mr. Monk is one chill beer, thanks in no small part to special labels that contain salt crystals. Once moistened, these tags allow Mr. Monk to cool down far faster than normal when placed in the freezer. (This was necessary because, in Argentina, mainstream brews dominate retail refrigerator sections, forcing Mr. Monk and other craft offerings to be sold at room temperature.) “It’s about working with the clients in a collaborative manner to look for solutions together, through technology, that solve problems or needs in a simple way,” says Wunderman Buenos Aires executive creative director Patán Tarazaga. Brand perception got a lot cooler as a result, the agency reports, with millennials viewing Mr. Monk as an innovator, and product requests from individuals and supermarkets flooding the brewer’s website.

AKQA developed a storybook app that puts animations on screen as kids read each word of a wintry tale aloud. “We wanted to create a new incentive for little ones to enjoy learning how to read,” says agency senior copywriter Graham Davis. “SiriKit technology allowed us to turn words into triggers for anything: making a character grin, dimming the sky, creating a noise—instilling a responsibility in the little readers to get the words right so they can see what they will bring next.”

Activision’s Call of Duty franchise sure knows how to open up a new front in the gaming wars. Last year, when mysterious invaders overran Black Ops 3, players were directed to Facebook Messenger to receive their marching orders and unlock clues for an early look at the Infinite Warfare trailer. “Call of Duty’s biggest social network isn’t Facebook or Instagram or Snapchat,” explains AKQA creative director E.B. Davis III. “It’s the game that millions of people are playing for hours each day.”

So it made sense to promote the new game, Infinite Warfare, by introducing it through the lens of the game they were currently playing.” This strategy was a winner, “because we didn’t force people to do anything they didn’t want to do. We went to where fans were, and they had complete control over how much they wanted to participate,” says Davis. “Fan culture is built in large part around speculation for ‘what comes next,’ which fuels a lot of chatter that then gets other, more casual fans involved.” 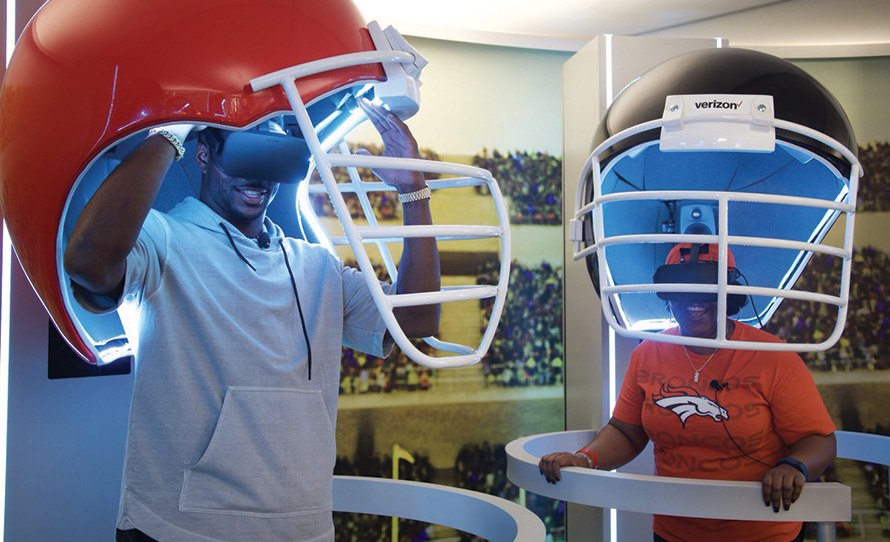 With action footage filmed live at University of Phoenix Stadium (site of Super Bowl XLIX), this VR game let fans compete against each other in real time. Surround sound and rumble plates provided a rough-and-tumble multisensory experience for the nearly 6,000 consumers who participated. “When we create experiences like Virtual Gridiron that turn typically isolating and lonely VR into a moment of shared human connection, we hope to forge another incremental steppingstone in the evolution of the medium,” says Momentum creative chief Omid Farhang.

Conventional wisdom says it’s tough to engage with millennials on social because they tend to skip past branded content. Well … scratch that. Bacardi and BBDO found a tuneful solution, creating an Instagram Stories experience that lets users mix music on their phones. Folks engaged the platform’s “skip” function to move between video clips of samples and scratches to create fresh sounds of their own—just like club DJs mixing on turntables.

“It was simple to produce and simple for users to engage with,” says Zara Mirza, head of creative excellence at Bacardi. “The result was over 11 million media impressions with zero dollars in media investment.” All told, Instant DJ generated 200,000 interactions and a nearly fourfold increase in Bacardi Instagram followers. “Hack what people are already doing and loving,” Mirza says. “Become a part of how consumers are embracing technology today. And don’t overcomplicate it.” 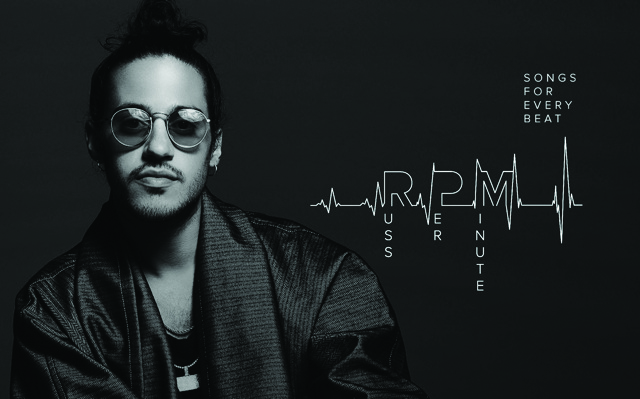 To help Columbia recording artist Russ expand his audience, BBDO created an algorithm that orchestrated a musical melding of heart and science. Users accessing RussPerMinute.com were prompted to hold their phones to their chests in order to sync their heartbeats with an appropriate selection from Russ’ catalog. “We decided to demonstrate that he had a song for every moment of your life,” explains agency executive creative director Danilo Boer. Low beats per minute yielded slower numbers, while accelerated heart rates triggered thumpin’ dance-floor jams. 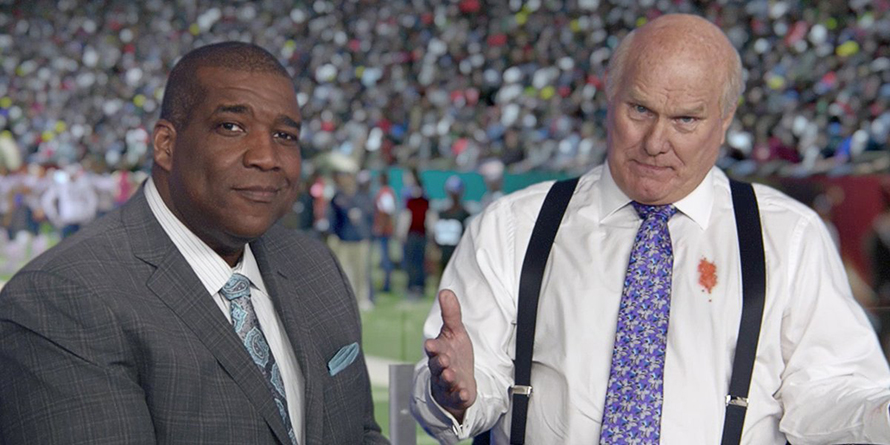 With 110 million-plus viewers, the Super Bowl reigns as the world’s biggest media event—and this inspired stunt starring halftime-show co-host Terry Bradshaw with a stain on his shirt was suitably epic, ranking among the most buzzy Big Game campaigns of 2017. Fans lit up social media about Bradshaw’s unsightly smudge during a live broadcast promo. In reality, it was all an elaborate lead-in to a wacky pre-recorded commercial showing the NFL icon racing around in a golf cart before ultimately tackling the stain with Tide (at Jeffrey Tambor’s house, naturally).

Here’s a real eye-opener. To differentiate the Airbnb travel experience from standard tourist fare, Starcom developed a split-narrative film and special bifocals. Viewing the content through the top of the glasses yielded clichéd vacation images (taking selfies at the Eiffel Tower), while watching through the bottom of the glasses brought a change of perspective (exploring neighborhoods and interacting with locals). “It wasn’t just about being innovative,” says Rob Davis, president of Starcom USA. “We found a delivery mechanism for our brand message that told the story in a way no traditional method could.” Released in cinemas before major motion pictures like Finding Dory, the campaign generated 30 million impressions across all markets, and a 150 percent increase in brand awareness among moviegoers. 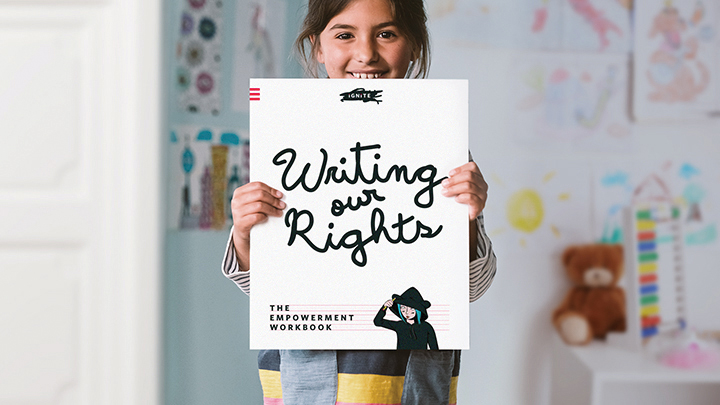 Writing and rights go hand in hand in this workbook that uses the words of 10 iconic women—including Sandra Day O’Connor, Shirley Chisholm and Hillary Clinton—to teach girls about history and government and help them realize their true potential. “It raised our public profile significantly, and it is noteworthy that 90 percent of the people who now own Writing Our Rights had never heard of Ignite before,” says Anne Moses, founder and CEO of the social justice organization. “We’ve experienced a 10 percent increase in new individual donors since the launch.” 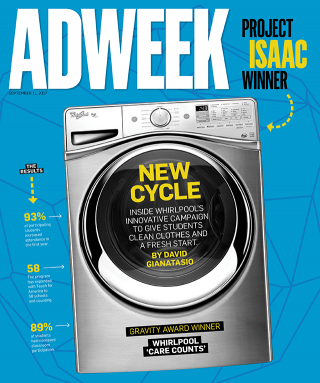