These Cannes winners fall into one of the buckets Let me tell you what’s modern in our world: fear. A fear of losing jobs, of becoming irrelevant before retirement, of suddenly questioning the purpose of our existence as an industry. Consumers may have realized they can do without us, and that epiphany poses a frightening, almost paralyzing reality. That is, unless we prepare.

Having trained in martial arts my entire life, I learned to use pressure to focus, drawing from deep memories and recent experiences to get out of trouble, come out alive and maybe even win. Like a flash in martial artist and actor David Carradine’s Kung Fu series, the flourish of punches and kicks the world keeps throwing at us compares to my recent experiences as a Cannes Lions juror over the last three consecutive years.

Each time, I went looking for that one golden answer and came back with a different one. On Titanium, I saw the importance of being great in the work that keeps this industry alive. With social, I had the chance to watch ideas so connected to the spirit of our times that they felt electrified. From my experience judging entertainment, I saw the power of ideas transcend advertising.

Great fighters, like great marketers, need to possess a cross-disciplinary approach, but when training—or briefing—must treat each tactic separately.

Award show judges aren’t there to teach the world what makes an idea great but to learn on the behalf of the industry what greatness will become. In my quest, I realized that my favorite work across segments comes in three shapes rather than one.

I call the first group engine ideas, the kind that keep businesses moving. These concepts, first and foremost, need to work and hopefully achieve brilliance, too, like Nike’s “Dream Crazy” campaign. Incredible or mundane, engine ideas remain predicated on the notion that they cannot fail because a lot of pieces of the corporate game rely on its marketing operation running smoothly.

The second group are live ideas. These ones mostly derive not from a client-requested assignment but instead from what’s happening in the world. Whether pop-cultural, technological or news driven, the source comes from the outside. Look at what Wendy’s did to hijack the burgers-versus-pizza war on Fortnite, and you will know exactly what this classification connotes.

Some ideas survive time, transcending products and current needs. I would label this third group as legacy ideas. This work carries an importance that goes beyond marketing to impact the trajectory of culture, likely requiring a few silos to break for the concept and budget to work. Think Fearless Girl and BMW Films territory. These concepts carry longer-range impacts, remembered by consumers and industry insiders alike. They’re meant to stay.

The best creative work in the world often falls into one of these areas, rarely carrying qualities of all three. These buckets relate to the thought processes and the mental state of their creators. They remain distinctive in expectations, timing and ambitions. To develop, these ideas require clear separations between one another.

Just like in fighting. The modern well-rounded fighter must train some sort of striking technique (a punching and kicking style like boxing, karate or Muay Thai), a kind of grappling (rolling on the floor and submitting the opponent, like wrestling or Brazilian jiujitsu) and work on conditioning to avoid running out of energy. From outside the ring, those disciplines appear as though they can be trained together. But to achieve world-class status, you must train each independently. Then you can learn to seamlessly transition between them.

That’s the secret: Train them separately, transition seamlessly. This pattern manifests in advertising, too.

Great fighters, like great marketers, need to possess a cross-disciplinary approach, but when training—or briefing—must treat each tactic separately. Amazing ideas grow in different areas because each engine, live and legacy idea derives from a distinctive goal. If a haymaker of a live idea gets proactively presented during a big discussion on the tightly knit schedule of an organization with an engine mentality, people might get angry. If a legacy idea gets brought up when people expect a quick live-type win, frustration will ruin everything. Knockout ideas deserve better than dying because they were discussed in the wrong context. 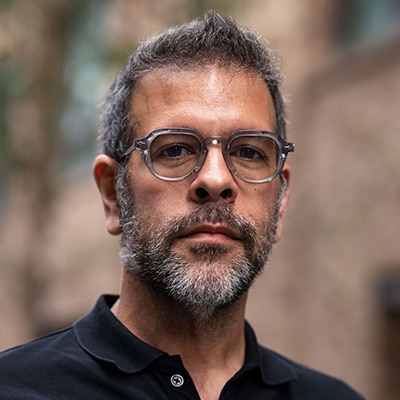 @pjpereirajr
PJ Pereira is creative chairman and co-founder of Pereira O’Dell and is an advertising and entertainment pioneer.