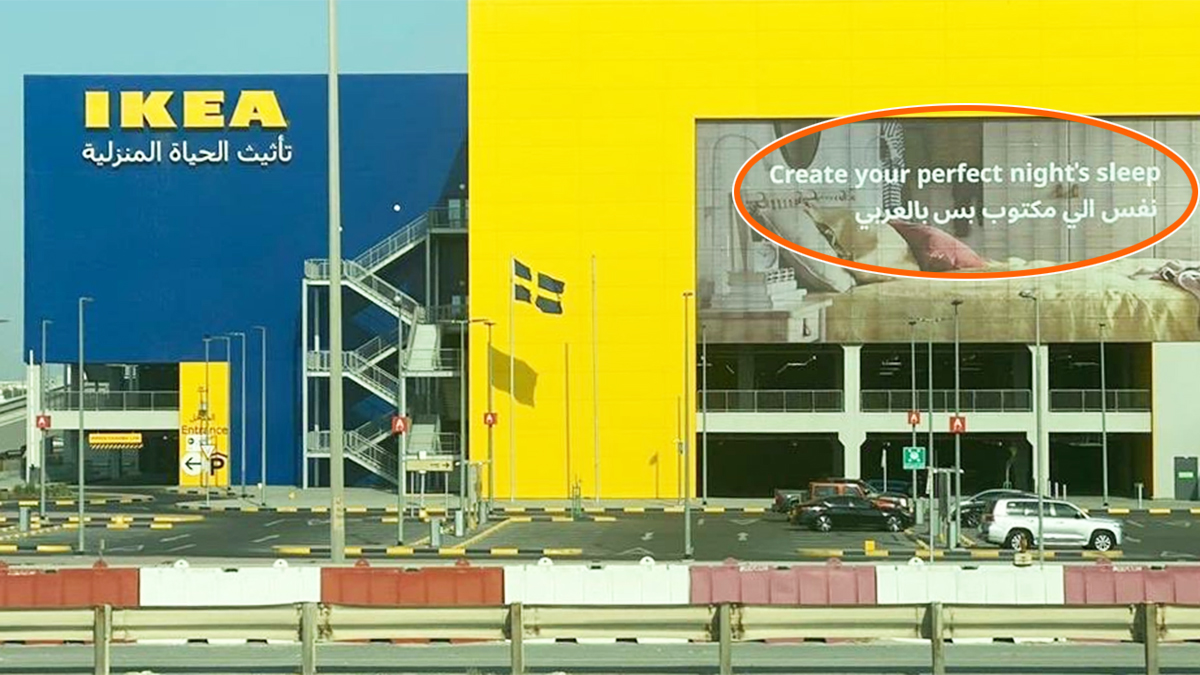 "Create your perfect night's sleep" is mistranslated in the ad as "The same as written, but in Arabic." It was later updated. - Credit by Via Sneha Sharma on Twitter, emphasis added by Adweek

In the marketing world, the line between embarrassing mistake and well-crafted opportunity is a notoriously blurry one. Companies (and the U.S. president) often say their gaffes were actually intentional, leaving many to decide for themselves.

That seems to be the case with Ikea in Bahrain, where the retailer raised eyebrows with a storefront ad that said “Create your perfect night’s sleep” in English, but was translated into Arabic directly below it as “The same as written, but in Arabic.”

After locals noticed the sign, which generated news coverage in Bahrain, Ikea updated the display, possibly implying the mistake had just been a joke about what happens when you don’t get a good night’s sleep.

In the image below, shared by Twitter user @khan_s90, you can see the mistranslated line was crossed out and replaced with “This is what happens when you don’t get enough sleep. Enjoy your perfect sleep” in Arabic.

So was this a translation flub or a planned marketing move aimed at generating buzz?

We talked to Sneha Sharma, senior social media manager and conceptual creative at agency Memac Ogilvy Bahrain, who brought attention to the mistake on Twitter. (While the Memac Ogilvy network has often worked with Ikea in Dubai, Sharma said the agency isn’t involved with Ikea in Bahrain.)

Sharma believes it was indeed a mistake, but one the brand reacted to quickly and adroitly, showing that it was willing to poke some fun at itself.

“I think it was an honest mistake. The team approving the final ads and those printing it could have been non-Arabic speakers. So, there is a chance this is a genuine slip,” she said. “Most of us have been in such a situation where many eyes have gone through the ads, yet we have missed out on the mistakes only to realize when they go live. So we know, such slips can happen.”

That said, she admits she’s not entirely sure it wasn’t a planned error aimed at sparking discussion in Bahrain for the Sweden-based retailer.

“There is a slight possibility that this could have been intentional. Their revised ads, after the original went viral, as well their media responses, certainly make it seem so,” she said. “The whole episode stays within the Ikea vibe and sounds almost believable. I still think it is a clever cover-up for an honest mistake.

“Here in Bahrain, people spotted it and laughed about it in good humor. Some even wondered if it is a smart marketing tactic. This definitely created a huge amount of online and offline conversations debating about the same.”

The move even created some store visits as word of the mistake got around, she said.

“Many drove to Ikea to check if it indeed happen,” Sharma said. “So, without spending a penny, this went viral in the country and got everyone talking about you. To me, that’s pretty impressive, even for an honest mistake.”

Adweek has reached out to Ikea and some of its regional agency partners to learn more and will update this article if we hear back.

Maybe the whole situation is just a really complicated ad for Snickers?