Facebook announced the global availability of Workplace--long-awaited, long-tested and formerly known as Facebook at Work--at an event in London Monday. 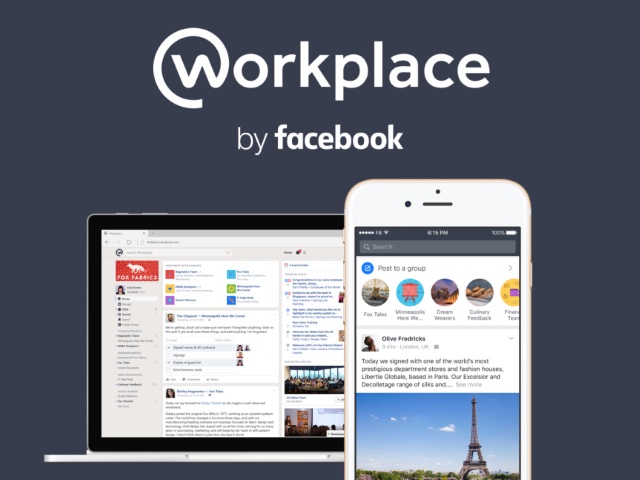 Facebook announced the global availability of Workplace–long-awaited, long-tested and formerly known as Facebook at Work–at an event in London Monday.

There are also features exclusive to Workplace, including a dashboard with analytics and integration with single sign-on, as well as with identity providers that allow organizations to integrate the service with their existing information-technology systems.

The social network also announced the introduction of a feature it has been testing since at least August, multi-company groups, allowing employees from separate organizations to collaborate “in a safe and secure way,” and it said these Workplace-exclusive features “will be rolling out to all customers in the coming weeks.”

And Facebook released pricing details for Workplace, saying that after a three-month free trial period, the per-user cost is $3 for organizations with up to 1,000 monthly active users, $2 for those with between 1,001 and 10,000 MAUs and $1 for those with 10,001 or more. The service will be offered free-of-charge to nonprofits and educational institutions.

Reports about Facebook at Work began surfacing as early as November 2014 (here and here), and the social network officially announced in January 2015 that it was testing the product with pilot companies.

The social network said in a Newsroom post Monday that more than 1,000 organizations globally are using Workplace—presumably including Royal Bank of Scotland and Club Med, which were announced as partners later in 2015—and those organizations have created nearly 100,000 groups.

According to Facebook, the five countries using Workplace the most are:

Workplace director Julien Codorniou spoke with Ingrid Lunden of TechCrunch at the London launch event, explaining the long process of launching the product by saying:

We had to build this totally separate from Facebook, and we had to test and get all the possible certifications to be a SaaS (software as a service) vendor. We wanted to see how it would work in very conservative industries and government agencies. We had to test the product in every possible geography and industry, especially the most conservative ones. We feel we are ready for primetime now.

We wanted to build enterprise software the Facebook way.

When asked about potential monetization, he added:

We’re going to grow workplace like Instagram and Messenger. Before you even think about monetization, we want to spend the first years growing it. We are obsessed with growth.

Codorniou also spoke with Kurt Wagner of Recode, who asked him about whether Workplace would include a document tool along the lines of Microsoft’s Word or Excel, and he replied:

The priority for us is for everybody in the company to use the basic product and then we will explore other projects.

Facebook vice president for Europe, the Middle East and Africa Nicola Mendelsohn said at the event, as reported by Katie Collins of CNET:

We already use tech to make our personal lives easier. It’s high time that we put that same kind of power towards business.

The workplace is about more than just communicating between desks within the walls of an office. Some people spend their entire workday on the go, on their mobile phone. Others spend all day out in the field or on the road. We’ve been amazed by the breadth of organizations that have embraced Workplace—from a shipping company that can now connect with its ship crews using Live video, to a bank that now uses Workplace instead of fax machines and newsletters to share updates with its distributed bank branches. Large multinational companies like Danone, Starbucks and Booking.com; international nonprofits such as Oxfam; and regional leaders such as YES Bank in India and the Government Technology Agency of Singapore have all embraced Workplace. People work in different ways around the world, and Workplace’s mission is to help them stay connected.