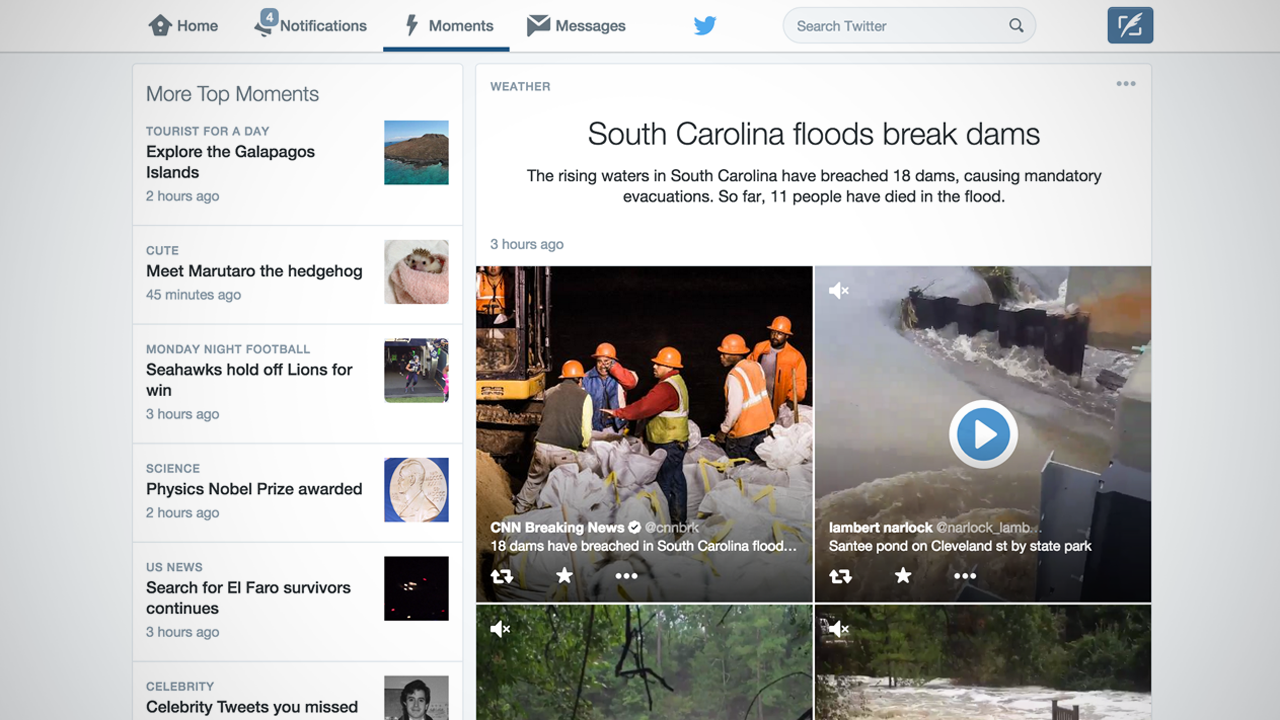 Twitter today unveiled Moments, the long-rumored content-curation feature that industry observers believed for the last several weeks would be called Project Lightning. It's got something for everyone—viewers, media companies and brands.

Moments is designed to make it easier to use the platform by removing the need to follow other people in order to create a newsfeed. The feature appears as a central tab on Twitter's mobile app, offering a magazine-style look at the most talked-about news items.

The move comes one day after the San Francisco company named interim chief Jack Dorsey as its permanent CEO, and ad-revenue lead Adam Bain as COO. By announcing Moments, Dorsey instantly highlights his quest to draw more viewers to Twitter. He said he wasn't satisfied with audience growth when the company reported 316 million monthly users in its last earnings report.

This is a play for advertisers, too, which probably has Bain's fingerprints on it. Five or so brands will start testing a new ad unit called Promoted Moments in the coming days, and several more are in talks with Twitter to get on board. It's more of a premium purchase like the Promoted Trend unit than Promoted Tweets (which entail a lot of available inventory), a rep for the company said, but Twitter is not disclosing pricing.

According to a Twitter email this morning, Promoted Moments will let "a brand to tell a complete story through this immersive Moments format." Indeed, these are being billed as rich-media units that can address real-time events or seasonal narratives.

The social-media company even has a nickname for the ads—ProMos.

"We'll test Promoted Moments with a prominent placement within the guide of the day's top moments, running for 24 hours—similar to how the Promoted Trend is placed within the Trending Topics list," a Twitter rep described. "We're just beginning to test this with brands—so we expect to learn a lot from these test and understand how consumers react. This means things may change. There are so many possibilities for brands here—but we're starting slowly to ensure we learn from what users like best in this environment."

It will be interesting to see which marketers give ProMos a try. Like rival Facebook, it's important for Twitter to continuously devise paid products for brands that make sense to marketers in order to increasingly generate revenue.

With Promoted Moments' video capabilities, it stands to reason that Twitter sees them as another way of getting into TV budgets—which Facebook also aspires to achieve.