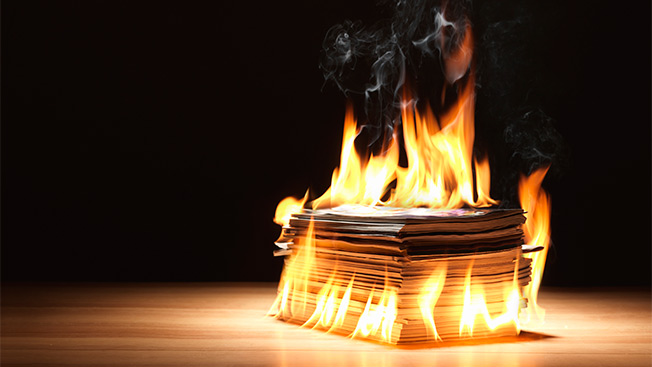 That 64 percent plummet, noted by The Atlantic, was just one ominous point made by The Brookings Institution in a recent essay titled "Bad News About the News." It is a retrospective gut-punch for the newspaper industry and notes in summary that "the economic devastation would be difficult to exaggerate."

One of the piece's not-so-fun facts for print journalism fans: The Washington Post's profits of $120 million a year in the late 1990s have now evaporated, leaving the storied paper instead with a loss of $40 million last year.

The Brookings essay was, in fact, written by the Post's late-1990s managing editor, Robert Kaiser, who begins by describing the moment in 1998 when his company opted not to invest in a fledgling startup called Google. (Spoiler alert: That was a bad idea.) Kaiser does not look back on such missed opportunities with any sort of malicious glee, nor does he let the industry off the hook for poor decisions made in the early days of digital. The nation's best-known newspapers could pay the ultimate price for their apathy and sluggishness in the days when they were flush with cash, he notes.

"In the first years of the 21st century, accelerating technological transformation has undermined the business models that kept American news media afloat, raising the possibility that the great institutions on which we have depended for news of the world around us may not survive," Kaiser wrote. "These are painful words to write for someone who spent 50 years as a reporter and editor at The Washington Post."

If you're looking for any optimism about the newspaper industry, you won't find much in Kaiser's essay, which predicts advertising will simply never be the money faucet it once was:

• Craigslist has essentially destroyed the classifieds industry that once supplied newspapers with a third of their revenue.

• What little money newspapers were able to bring in through Web ads in the early days has dwindled as more and more sites have arisen to challenge papers for those ad dollars.

Newspaper owners and employees aren't the only victims in this mass starvation, Kaiser said.

Since Watergate, he said, the question "How would this look on the front page of The Washington Post?" has been used by insiders to curb colleagues who propose somewhat nefarious means to their political ends.

Sure, journalism will live on, but Kaiser said unbiased journalism will fragment into uninfluential shards while politically aligned outlets prosper: "Today's politicians, especially on the right, communicate to 'their' voters through 'their' media … so 'the news' that once helped unify the country is now just another source of division."

One often overlooked downside of the newspaper declined cited by Kaiser is the decline in coverage of Congress members by news organizations "back home." He points specifically to Connecticut, which went from having a dozen local TV and newspaper reporters in Washington, D.C., in the 1980s to absolutely none by 2010. (However, he says bloggers are quickly beginning to fill that specific void.)

So what, pray tell, does he say newspaper pros have to look forward to? A few things, actually.

The relative success of The New York Time's paywall shows that the bleeding can be staunched to an extent. The paper has a reported 800,000 digital subscribers, outnumbering the 680,000 daily print readers and bringing in a desperately needed $150 million a year.

And then there's America's new crop of wealthy elites, who could end up both bailing out news outlets and helping point them in a more profitable direction. That's like what Amazon founder Jeff Bezos had in mind when he bought The Washington Post in 2013 for $250 million, ending 80 years of ownership by the Graham family.

"[Tech giants like Facebook] were created by a new generation of young people whose self-interest may lead them either to realize the importance of the legacy institutions or figure out how to create new ways to do what the old news organizations did in the past," Kaiser said. "Financially, it would be easy for Google to rescue The New York Times. The annual cost of the Times' newsroom represents less than 2 percent of Google's 2013 profits."