Ringing up revenue for retailers 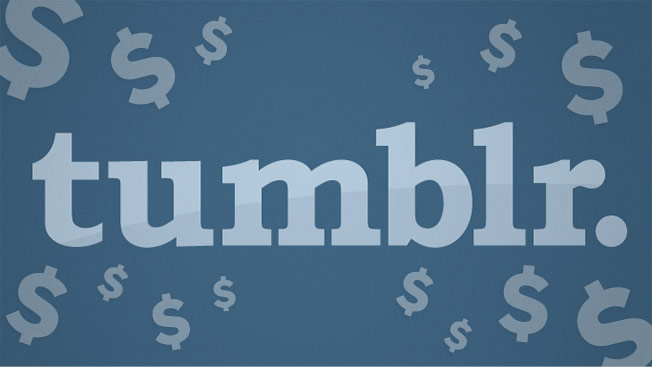 Sure Tumblr has an artsy, hipster appeal, but its users are far from starving. In fact, and perhaps surprisingly, it caters to the wealthiest social media set of any of its rivals, according to recent data.

If Facebook is the blue-collar everyman network, Tumblr is more of a luxury destination. Niche yes, but lucrative for retailers. The high-end crowd is one of its top draws as a marketing platform.

The relative wealth of Tumblr users has translated into dollars for retailers who attract traffic from the site. An Adobe report said that a retail referral from a Tumblr link is more valuable than a referral from Facebook, Twitter and Pinterest.

“Tumblr is small but mighty and offers retailers a visually stimulating environment,” said Tamara Gaffney, Adobe Digital Index’s principal analyst. “The fact that it produces the highest revenue per visit from mobile devices is likely due to its user base, which is skewed to young, trendy and well-educated urbanites with a greater affinity for online purchases and the disposable income to spend more.” 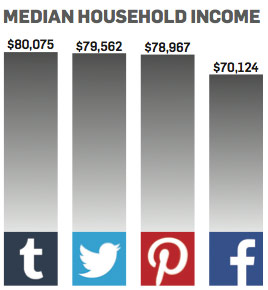 The average revenue per visit generated by a Tumblr referral to a retail site is $2.57 on tablets and 67 cents on smartphones, according to the latest Adobe Mobile Benchmark report.

The next valuable mobile social media referral comes from Facebook, where a visit is worth $1.55 on tablets and 42 cents on smartphones. Twitter is No. 3 and Pinterest is No. 4, per Adobe.

Tumblr’s impact on sales is one of its selling points to marketers, as is its high-end user base, which is relatively small when compared to the 1.3 billion on Facebook and 271 million on Twitter. Tumblr has about 14 million registered users in the U.S., reports eMarketer, which represents only a fraction of traffic to its site because not all visitors are logged in.

A brand report compiled by Tumblr in August shed some light on how its users make purchasing decisions from their dashboards, which are the hubs that display all their Tumblr content.

More than half of Tumblr users purchased something found on their dashboards, the report said, and 90 percent “have been inspired to buy something.”

They also tend to come back.

“Not only do our users have the greatest spending power, but they also spend the most time on our platform,” said Lee Brown, Tumblr’s global head of brand partnerships. “They are both engaged and active, taking that next crucial step to buy what they discover on Tumblr (and then post about it).

“The customer journey begins on Tumblr with prepurchase aspiration and ends on Tumblr for postpurchase celebration, making Tumblr the ultimate destination for shopping,” Brown said.