The Top 9 Most Contested AP Style Changes in ‘Hopefully’ Ever 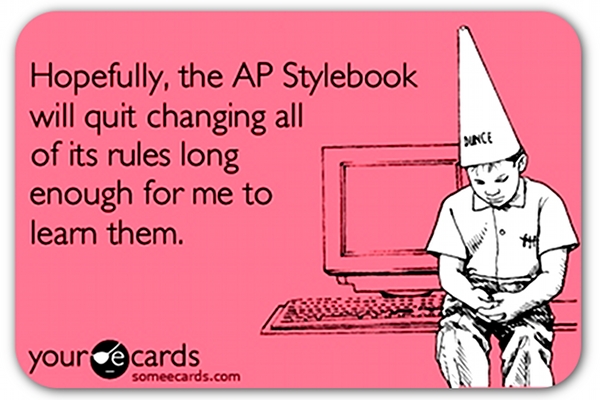 Come on. High-Five? Who’s with us?

Thanks to the evolution of text lingo, –isms, and a cornucopia of other logophilic and verbivore-ish drama, the AP Stylebook has become the most coveted book for hacks and flacks alike. It’s like anything Adobe — one second away from the thing and it shoots you another inconvenient update.

I’ve been struggling with this whole Oxford comma thing since I read this study and this report. I had a nightmare last night — woke up screaming, sweated a little, and ran to my computer to make sure the Oxford commas hadn’t been adopted overnight.

While that change has yet to be made — and I still struggle with adopting it — here are 10 other controversial changes from the AP Stylebook that caused a Jonestown-like response. Bottoms up?

1. More Than Vs. Over. It’s time to get over “over.” No matter how much we cry about the grammarian universe imploding into a black hole of “more than my dead body” wasteland, AP thought this was the right move. There was nothing wrong with “more than” referring to amounts and “over” discussing height. We blame hipsters. Who else?!

2. Illegal Immigrant. The change that was heard ’round … the world. Yeah, that’s what I meant. AP said use immigration because the “action is illegal, not the person.” And as many politicos and people in my fare burg said, “#$%&*@ Thanks, Obama!” Hey, it’s Texas. What can I say?

3. Web (space) site. Face it: Tech and AP should never hang out together at parties. They drink. They carouse. They take questionable pictures. And then, they screw with the world for kicks. I suppose “web” did not modify “site,” because it’s a real word and all. Oh wait, that’s Noah Webster on the white courtesy phone.

4. e-mail / email. Speaking of technology, here is the result of another late-night hullabaloo. What did that hyphen ever do to you, AP? It separated two distinct thoughts, as in e-verything else online! One day, all journos and PR pros were one big happy family, and then this happened. Maybe that’s why “Wal-Mart” changed sides?

5. OK-. We all do this, and while mind-numbing text lingo is validating the change, the word used to “Okay.” Yeah, AP got their grubby mitts on that too. Truth is, in 1839, “OK” became a thing as a joke. Someone at AP must have had issues with a two-letter word, so it became “okay.” Until they changed it back again. I guess it wasn’t O-K-A-Y after all.

6. Champagne. This made the highfalutin rejoice, and the rest of us who imbibe from brown paper bags feel a little frou-frou as well. Evidently, the French raised a stink. Grab your local bottle of Moet or whatever gangsta drink you have, and read the label. If it is not made in the “Champagne region of France,” it’s sparkling wine. Next protest? The denizens of Champaign, Illinois.

7. Hopefully. It’s an adverb. What’s the big deal? When this changed into a lazy acceptance of young folk-speak, the copy editing world went nuts. Imagine how a mall would be like if Justin Bieber walked in, only this is important. They called it “the modern usage of hopefully.” As in, starting a sentence with it. Hopefully, that won’t change anytime soon.

8. Husband & Wife. With apologies to the marriage equality folks out there in PRNewser land, the AP Stylebook hates you. Maybe Rush Limbaugh is the chairman. Who knows? Couples or partners was thing for a while, but then AP changed all that and went back to husband and wife. In a strange move, AP thought that would fly when they said the terminologies are “all-inclusive.” I have a few bears I know I would so love to fly to their offices.

9. A “STATE”-ly Manner. This was the big one! The one that caused everyone who writes for a living into a fit of convulsions so violent, some folk had to take a sick day. It was just a couple of months ago when the abbreviation police at the AP must have been laid off due to the economy because spelling out all states in stories is now a thing. (Pssst. Anyone else abbreviate states just to slide it by the editor? Me too. Not this one, just sayin’.)