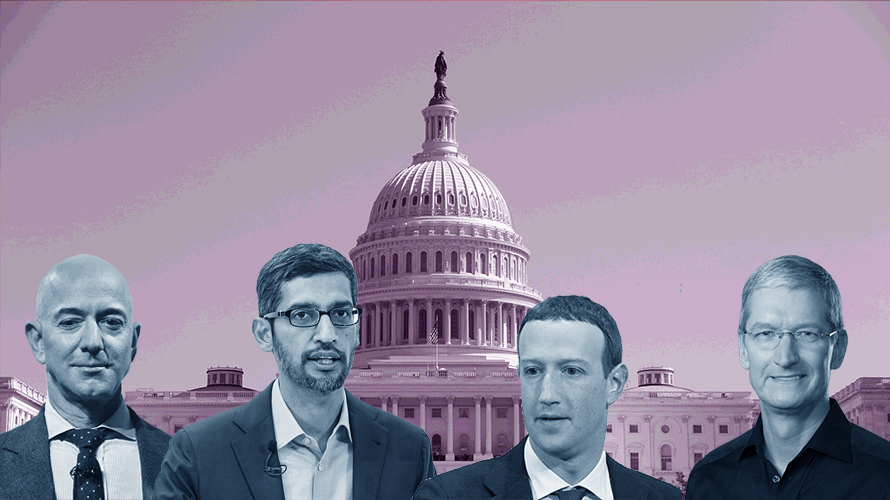 The House Judiciary Committee has confirmed that the CEOs of Amazon, Apple, Facebook and Google will go before its antitrust subcommittee later this month, as governments across the globe continue to put regulatory pressure on Big Tech.

Amazon’s Jeff Bezos, Apple’s Tim Cook, Facebook’s Mark Zuckerberg and Google’s Sundar Pichai will appear as witnesses at a hearing on July 27 as part of the subcommittee’s ongoing investigation into competition within the digital marketplace.

“Since last June, the subcommittee has been investigating the dominance of a small number of digital platforms and the adequacy of existing antitrust laws and enforcement,” according to a joint statement from House Judiciary Committee chairman Jerrold Nadler and Subcommittee on Antitrust, Commercial and Administrative Law chairman David Cicilline.

The scrutiny by U.S. authorities mirrors that of regulators elsewhere in the world such as the European Union, where both Facebook and Google have been on the receiving end of several censures. Authorities there have also taken aim at Amazon and Apple recently.

Adweek will be devoting a day to privacy and data regulation during NexTech 2020, a four-day summit beginning July 27. Register now for this complimentary virtual event.

Although these investigations will examine the breadth of the respective players’ platforms within the digital ecosystem, their collective dominance of the $135 billion U.S. digital advertising market is likely to be a key area of focus.

For instance, news of the July 27 testimony follows weeks of speculation that the Justice Department and multiple state attorneys general are probing Alphabet-owned Google’s dominance of this sector, with some expecting lawsuits within months, if not weeks.

A recent eMarketer report forecast that Google, Facebook and Amazon would collectively account for 62.3% of digital ad spend this year, with the latter two eroding the Alphabet-owned company’s market lead: Apple, which does not break out advertising revenue in its earnings reports, is a comparative minnow in the ad game compared to other members of the quartet. However, its influence in the digital media landscape was underlined recently with the privacy overhaul to its upcoming iOS 14 update prompting fear that it could decimate the $45 billion in-app mobile ad market.

In it, they implore him to make the iOS 14 updates, which require consent from iPhone users in order for third parties to access their data on a per-app basis, more compatible with the trade bodies’ guidelines for complying with privacy laws such as GDPR.

“Apple’s initiative raises competition issues, especially for industry stakeholders specialized in mobile app promotion and measurement,” reads the letter. “The ability for these companies to conduct businesses and provide their services could be severely restricted.”

DoJ vets make a case against Facebook and Google

In recent weeks, two academics (and Department of Justice veterans) have co-authored papers outlining the case against both Facebook and Google: Fiona Scott Morton, professor of economics at the Yale University School of Management; and David Dinielli, senior adviser on beneficial technology at philanthropic investment firm Omidyar Network.

Both papers are based on the findings gathered by the U.K.’s Competition and Markets Authority, and outline possible roadmaps for an antitrust case against the two companies, commonly referred to as “the duopoly” among media buyers.

“Evidence provided by the U.K. authority reveals a great deal about the lack of competition in ad tech and the anticompetitive behavior of Google in recent years,” alleged Scott Morton in her assessment of Google. “It adds up to a very concerning situation that warrants close scrutiny on this side of the Atlantic Ocean by U.S. antitrust authorities.”

The corresponding paper, Roadmap for an Antitrust Case Against Facebook, read, “We now find ourselves in a world in which social networks are dominated by a single firm—Facebook—that appears to be able to take almost any action, whether about price, politics or psychology, without losing its position.”

These arguments build on those of fellow noted scholars Dina Srinivasan of Yale University’s Thurman Arnold Project, which brings together academics to collaborate on research about competition and antitrust enforcement. In a December 2019 paper, she alleged that Google’s dominance of programmatic media trading is based on principles and structures prohibited in other industry verticals where commodities are traded electronically.

“In advertising, a single company, Alphabet (‘Google’), simultaneously operates the leading trading venue, as well as the leading intermediaries that buyers and sellers go through to trade,” she wrote. “Because ads now trade on electronic trading venues too, should we borrow these three competition principles to protect the integrity of advertising?”

Google has tried to meet these criticisms head-on recently by publishing blog posts outlining how it shares ad-tech fees with publishers. This was in addition to Google’s formal announcement of a content licensing program “to support the news industry” in the same week, which some predict will be a rival to Apple News+.