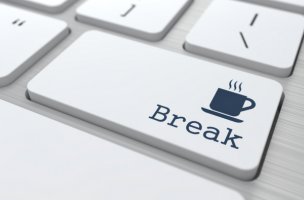 Whether you need to focus on the final stages of an important project for the next 24 hours, or you need a two-week technology detox, there’s a right way and a wrong way to take a break from Twitter.

How you approach your Twitter break will depend on how long you plan on silencing your 140-character musings. In order to keep your audience from abandoning your newly muted account, you need to understand how they interact with you, and what your goals are when you return.

The first, and most obvious, way to take a break from Twitter is simply to stop using it.

Step away from your computer, turn off notifications on your phone, and stay away from anything that could tempt you into tweeting.

This option is best if your Twitter break will be a short one, especially if you don’t want to lose your followers. If you do plan on returning to Twitter, it’s best to stay silent for only a few days, a week tops. This length of silence isn’t all that unusual (after all, you’re not the only one feeling social media burnout!), and most of your followers won’t hold it against you… some of them might not even notice you were gone!

Some people will take this option for longer periods of time, but if done too frequently, this can severely impact engagement rates with your target audience. After all, if you’re known to be unreliable in your responses or barely there, why should anyone interact with you? Simply going silent can give you some respite from Twitter, but it should be used in moderation.

Going away on a lovely two week vacation with the family? It might be a good idea to let your followers know.

You don’t have to rub it in that you’ll be on sandy beaches for the next fortnight, but you can tweet a quick goodbye. This will let your followers know not to expect any tweets from you for the next little while, and it will remind anyone visiting your profile that you’re AFK.

This is the best option if you are leaving Twitter for a predetermined amount of time. It ensures that your account isn’t written off as abandoned while you’re not tweeting. Plus, as an added bonus, it might encourage some last minute engagement with your followers as it shows a bit more of your personal side.

If going with this option, don’t forget to say “hello” once you return! Tweet to anyone who might have @mentioned you while you were away, and check in with your core audience or influencers. Let them know you’ve returned, so they can pick up their interactions with you.

Sometimes you just don’t want your audience to know there’s no one manning your account. If that’s the case, you can queue up tweets in a scheduler, like HootSuite, and pretend that you’re still there.

Use this option wisely, as it is easy for your followers to clue into the fact that no one’s home. If you’re sending out several generic tweets per day but not replying to a single @mention or retweeting fresh, new content, it can raise some pretty serious red flags and prompt your followers to click that dreaded unfollow button.

However, this can be an effective option for leaving Twitter for short periods of time, especially if you have a hectic schedule. Monday morning might give you an hour or two to tweet, but you know you won’t find the time to check in again until Thursday afternoon. Rather than staying silent during this time, you could schedule a few tweets to go out on Tuesday and Wednesday. Just be sure that when Thursday rolls around, you reply, retweet and engage.