Pew study surveyed more than 6,000 US adults on the subject 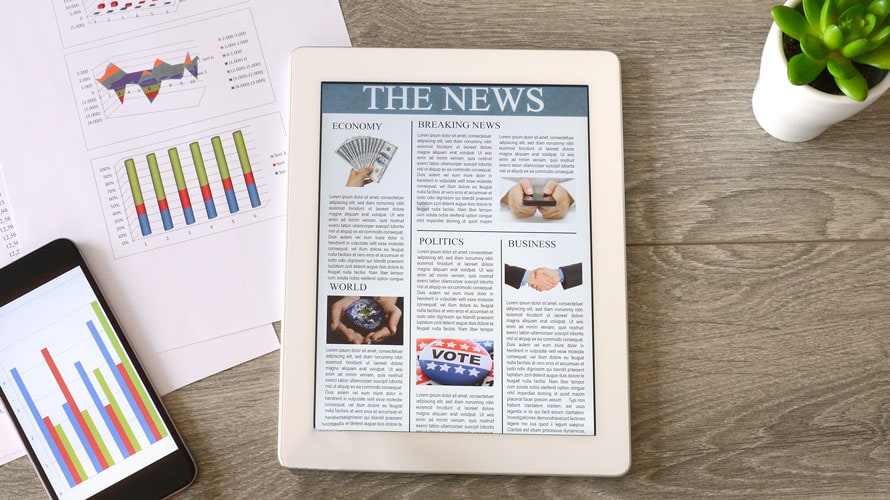 According to Pew, 'Republicans are nearly three times as likely as Democrats to say journalists create a lot of [made-up news].'
Getty Images
Share
By Emily Bright
|
June 7, 2019
Share

According to a study by Pew Research Center, 53% of Americans agree that made-up news is a big problem for the country—one that the news media is responsible for fixing.

Pew surveyed more than 6,000 Americans about various aspects of the impact of fake news: who creates it, what effect it has, and how big of a problem it is.

Participants largely believed there to be two big motivations behind creating “made-up news,” including “the desire to push an agenda and to make money.”

According to the study, public perception of made-up news substantially depends on factors such as political awareness and party affiliation. Americans with a higher exposure to political content say that they see more made-up news compared to those less politically aware, the latter of whom are more likely to share false material. Younger adults, between the ages of 18 to 29, tend to care less about the causes and effects of made-up news than their elders. 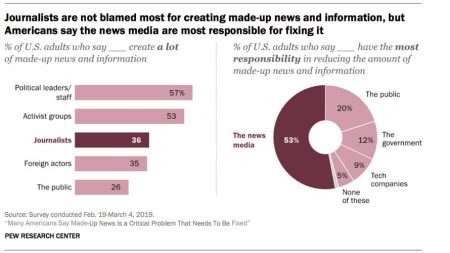 Republicans are more likely than Democrats to find made-up news more problematic and place a heavier blame on journalists and the news media. The majority of Republicans view made-up news as a leading problem in American today compared to fewer than half of Democrats. According to Pew Research Center, “Republicans are nearly three times as likely as Democrats to say journalists create a lot of [made-up news].” Overall, though, this puts the amount of Americans who see fake news as a big threat to the country—bigger than climate change, terrorism or racism, for instance—at 50%, according to the study.

Journalists are still put in the spotlight of blame for creating made-up news, and over half of adult Americans say that the news media carries the most responsibility to reduce the spread of made-up news. The survey was conducted Feb. 19 to March 4 among more than 6,000 American adults. 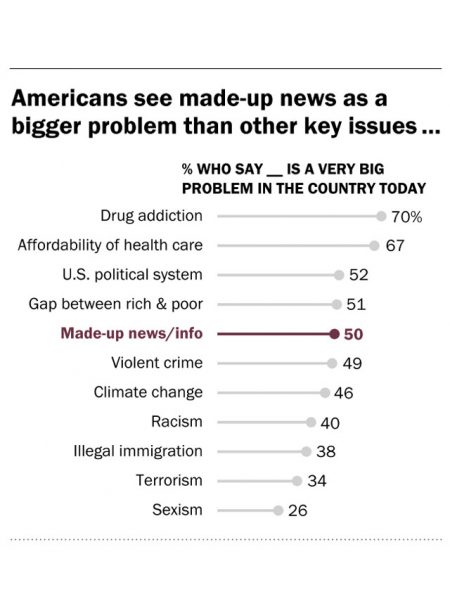 “The impact of made-up news goes beyond exposure to it and confusion about what is factual. Americans see it influencing the core functions of our democratic system,” said director of journalism research Amy Mitchell in a provided statement. “And while Americans want the issue of made-up news addressed, they are also conscious of the huge challenge posed by partisan divides in our country today—challenges that are pronounced in the level of blame members of each party place on the news media.”