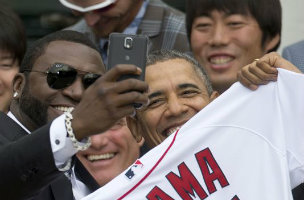 White House Balks at Samsung/Ortiz Selfie (USA Today)
The White House has objected to the now-infamous selfie featuring baseball star David Ortiz and President Obama, spokesman Jay Carney said Thursday. “As a rule, the White House objects to attempts to use the president’s likeness for commercial purposes,” White House spokesman Jay Carney said. “And we certainly object in this case.” Boston.com Ortiz took the photo with Obama when the Red Sox came to the White House on Tuesday to be honored for the ballclub’s 2013 World Series Championship. What seemed like a spontaneous moment later appeared to be more of a marketing ploy. WCVB It was re-sent by tens of thousands of Twitter users, and Samsung retweeted the photo as an ad. The company also said in a tweet that the photo was taken with a Samsung phone. CNET Ortiz told The Boston Globe that the selfie was his idea and his alone. No, his Samsung manager wasn’t sending any signals from the dugout. The Washington Post There is a law forbidding the use of the presidential and vice presidential seals, as well as those of the House, Senate and Congress. Protecting the president’s image, however, can be a bit murkier.

Twitter Adds ‘Search By Date’ Feature (AllTwitter)
Twitter has added a new feature that makes it easier for its users to find old tweets. With about a billion tweets sent every two days, you can imagine how difficult archiving and making all this content searchable must be.

Customer Service Inquiries Up 44 Percent on Twitter — but Response Times are Down (SocialTimes)
While many brands are getting better at engaging audiences on social media, customer service still presents a challenge. According to a Simply Measured Analytics report about how top brands use Twitter for customer service, mentions of dedicated customer service accounts on are up 44 percent, but the average response time is down 10 percent.

Facebook Tests a New ‘Save’ Feature for Your Favorite Posts (VentureBeat)
Facebook might be building its own method for saving articles and posts for later. One of our team members noticed that a “Save” button was present on some of the content in his Facebook News Feed.

Infographic: Image Sizes for Facebook’s New Pages Layout (AllFacebook)
Facebook has provided detailed information on the new layout for desktop pages it introduced last month, but tips on how page administrators should tweak their cover images and profile pictures to accommodate the new design have been lacking. Enter Fialkov Digital.

Vine Jumps on the Messaging Bandwagon (Re/code)
Vine, the six-second video sharing app, launched a new feature on Thursday that allows users to send private video and text messages to one another. The feature comes months after competitor Instagram also launched a private messaging feature for users.

‘How I Met Your Mother’ Series Finale Tops Monday’s Twitter Ratings (LostRemote)
We covered CBS’ “How I Met Your Mother’s” social TV legacy before its series finale Monday, and social fans gravitated around the farewell episode in a big way. According to Nielsen’s Twitter TV Ratings, the “HIMYM” series finale, whose ending polarized fans across social media, was the most social show among all of cable and broadcast on Monday.

‘Bounty Hunter’ Earns Record Payout, and Job, from Facebook (The Wall Street Journal/Digits)
Reginaldo Silva was poring over computer code in November when the one-time software engineer found what he thought was a security loophole on Facebook’s servers. The discovery led to the largest “bug bounty” ever paid by the company, and a job for Silva as an engineer at Facebook.

Why Marketers Can’t Afford to Ignore Tumblr (SocialTimes)
From the outside it can be difficult to understand how a social network works. Tumblr can be particularly confusing because of its esoteric community, its internal language, and its gif based madness and humor. But it’s becoming a bad idea for businesses to avoid the maturing network.