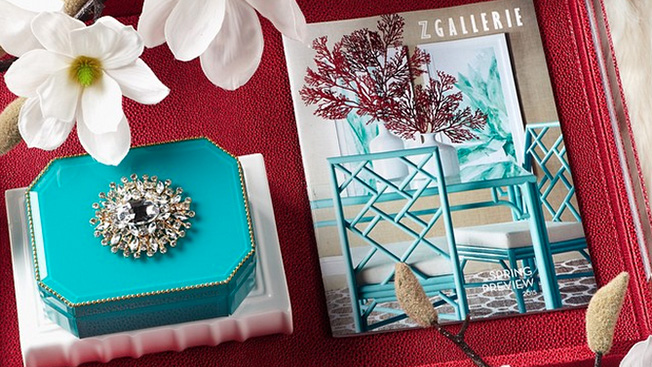 Despite the e-commerce boom, print catalogs are still a lucrative business for furniture retailer Z Gallerie. But getting those catalogs into people's hands is tougher than it was a few years ago, which is why the brand started employing Instagram about a month ago to rev up print subscriptions.

In September, Z Gallerie started plugging an Instagram tool from social media vender Curalate into its account. The tool lets the brand link pictures to websites and is essentially a work-around to Instagram's intentionally slow roll out of e-commerce. In April, Z Gallerie started swapping out links that usually point to e-commerce pages for links that direct users to a landing page where they could sign up for its spring/summer catalog.

#ZGalleriePets: @oh_barbie's furry friend @bentley_oh poses perfectly with our Spring Preview Catalog. Want a copy of our next catalog? Link in profile to sign up. Share a photo of our catalog with #PagesofStyle (must be following us) for a chance to win a $250 gift card to fuel your next shopping trip.

Have you dressed up your coffee table with our Spring Preview catalog? Link in profile to request! Available to US customers only. Via @azureyiam, who styled a stunning photo for our #PagesofStyle contest with our Jackson Sofa, Cosmopolitan Coffee Table, Faux Ayi Rug, Gabriel Pillow, & Ceramic Elephant.

Escape into immersive design with our Spring Preview catalog–link in profile to request one of your own (photo via @designsbylaila). Share your catalog style with us! Post a photo with #PagesofStyle for a chance to win a $250 gift card. Note: we can't see entries from profiles that are private. Be sure your profile is public in order for your entry to be eligible.

"With our last catalog, around the holiday season, we started to see photos pop up on Instagram of people receiving the catalog in the mail and taking a picture of it," said Loren Mattia, head of social at Z Gallerie. "As a result, we [wanted] to capitalize on it."

Mattia declined to share hard numbers, but did have some intriguing stats about the social app's impact on print-heavy marketers.

Traditionally, Z Gallerie runs pop-up ads on its website to capture sign-ups. Adding the Instagram link increased sign-ups by 24 percent in the first two weeks of the campaign.

The retailer also netted 10,000 new Instagram followers during the first week and garnered 99,000 comments and likes on its photos during the first two weeks. The campaign also increased the amount of weekly user-generated content by 17 percent compared to what the brand typically receives.

Z Gallerie is cross-promoting the campaign on Facebook, but Instagram is the main driver, generating 12 times as many subscriptions as Facebook in the first two weeks.

Mattia chalked up the boost from Instagram to Facebook's constantly changing algorithm that increasingly favors paid ads over organic content. "The fact is that Facebook has just become inundated with advertising, and Instagram is just starting to figure out their advertising product," he said.