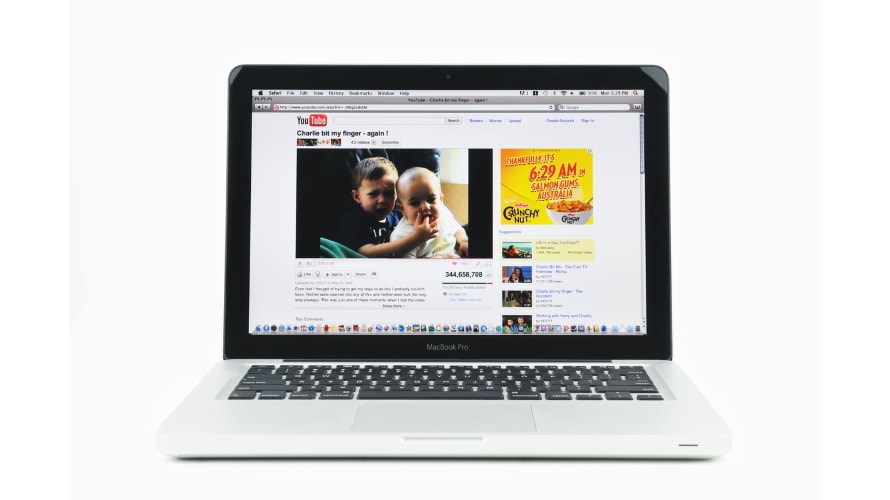 Videos featuring children who appeared to be younger than 13 saw three times as many views as other types
EricVega/iStock
Share
By David Cohen
|
July 25, 2019
Share

Kids and video games ruled YouTube during the first week of 2019, according to an analysis of high-subscriber channels and they videos they posted during that time period by Pew Research Center.

Pew used its own custom mapping technique to compile a list of YouTube channels with 250,000 or more subscribers as of late 2018, identifying 43,770 of those channels, and it then analyzed the videos uploaded by those channels during the first week of 2019.

The channels studied by Pew posted nearly 250,000 videos during the first seven days of the year, for a total of 48,486 hours of content.

The average length of those videos was approximately 12 minutes, and the average view count tallied during that time period was 58,358, for a total of more than 14.2 billion views during the first week of the year.

A small share of the channels analyzed by Pew was behind the bulk of the content produced during that time period, as the researcher found that 10% of the channels it studied produced 70% of the group’s videos. Conversely, the top 10% of videos by views accounted for 79% of total views for all videos in the study. 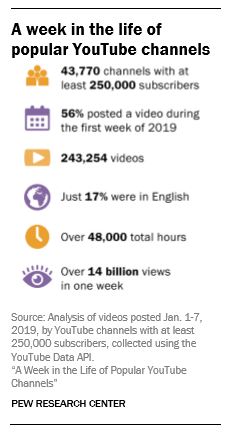 Pew also conducted a separate analysis of the 37,079 English-only videos posted by channels in its study group, in which human coders determined the primary category or theme for each video and examined keywords that were used in their titles and descriptions to determine which were widely used and generated higher view counts.

Videos targeted toward children or featuring children under the age of 13 proved to be popular in this group, and Pew found that videos intended for kids tended to be longer, to tally more views and to come from channels with larger numbers of subscribers than those targeting general audiences.

According to Pew, videos featuring children who appeared to be younger than 13 saw three times as many views as other types of videos.

Pew noted that YouTube explicitly states that its platform is not intended for people under 13, directing them to its separate YouTube Kids platform and application, with enhanced parental controls and age-appropriate curated playlists.

Videos related to current events or politics made up 16% of the English-language videos studied by Pew, and those videos tended to have an international focus, not mentioning U.S.-related events, issues or opinions.

Pew found that 18% of English-language videos posted during its study were related to video games or gaming, with that genre ranking among the most popular, and the researcher added that videos in this topic tended to be longer than other types.

Certain keywords brought about much higher view counts, with Pew highlighting Fortnite, prank and worst, saying that they generated five times as many views as the median video in the study.

Trump was another strong-performing keyword, with Pew finding that including the president’s name in video titles led to significant boosts in median views in videos on U.S. current events and politics.

The researcher added that 36% of videos about American current events or politics contained president or Trump in their titles.

Pew wrote, “The media landscape was upended more than one decade ago, when video-sharing site YouTube was launched. The volume and variety of content posted on the site is staggering. The site’s popularity makes it a launchpad for performers, businesses and commentators on every conceivable subject. And, like many platforms in the modern digital ecosystem, YouTube has in recent years become a flashpoint in ongoing debates over issues such as online harassment, misinformation and the impact of technology on children.”