One New York Town Does Not Love ‘Lucy’

Won't someone think of the children? 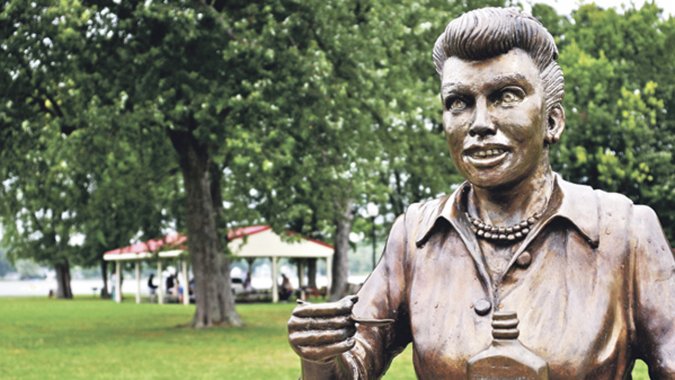 Lucille Ball is an American treasure, a stalwart in the female-centric comedy genre, and an untouchable TV icon.

But one town — technically, it’s a village — in upstate New York would like to forget about her via a wrecking ball and a backhoe.

Ball was born in Jamestown, New York, and raised in the aforementioned village dubbed Celoron.

The statue/abberation was created to celebrate the queen of comedy and her hometown…and to scare the hell out of any children within a 15-block radius.

According to this story in Yahoo!, an especially vocal fan wishing to remain anonymous started a Facebook group to advocate for the statue’s removal:

“The people of Celoron have erected this horrible statue of Lucy in her hometown. It is a nightmare. We want them to replace it.”

“I don’t think this can be repaired. Take a look at the beautiful statues Nick at Nite created for ‘Bewitched’ and ‘The Honeymooners’ and Bob Newhart… it needs to be something more like those.”

However, replacing the statue isn’t going to be that easy.

Celoron Mayor Scott Schrecengost told the Jamestown Post-Journal that it would cost a lot of money — between $8,000 and $10,000 — to have the original artist recast the statue, which was unveiled in 2009.

“We’d like to work with the original sculptor,” Schrecengost said, “and wish he would stand behind his work enough to step up and fix it for free.”

That’s almost certainly not going to happen. In the meantime, we could all use something to get that heinous Halloween mask out of our minds.