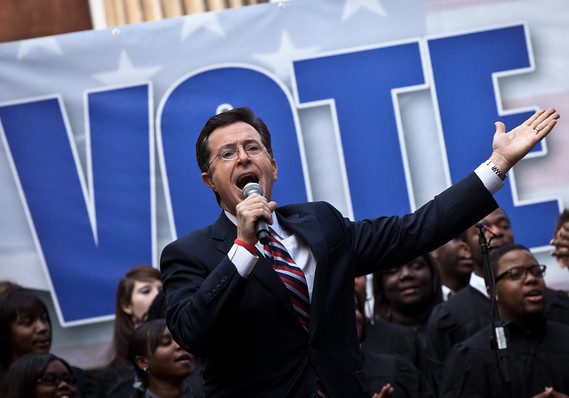 Hey national news, you think your ratings are bad now?

I haven’t seen a survey but I would be willing to bet that most journos and PR peeps watch Comedy Central … for news.

Why? How much drive-by shootings, domestic disturbances, child abuse cases, political scandals, and weather reports can one person take in a day? We need some levity so we read blogs with a tinge of snark and watch TV with a bit more.

Thank you Comedy Central for Jon Stewart and Stephen Colbert.

While they joke wonderfully about the world around us, they educate America by giving a no-nonsense approach to what “breaking news” obfuscates on a minute-by-minute basis. And now, there’s proof: Stephen Colbert has been voted the “most informative U.S. news source.”

The stunning news (for national TV news networks only) came from a study conducted by the University of Pennsylvania’s Annenburg Public Policy Centre. The study tested viewers of “The Colbert Report” against CNN, Fox News, MSNBC, and broadcast nightly news, as well as talk radio and newspapers as sources of political information.

Where does America not just watch the news but actually learn about the world around them? ‘The Colbert Report.’

The study shared that ‘The Colbert Report’ served as “an extended civics lesson.”

The show not only increased people’s perceptions that they knew more about political financing, but significantly increased their actual knowledge, and did so at a greater rate than other news sources.

Much of this information came from Colbert’s spoof “Super PAC” (political action committee) and other 501 (c)(4)s, which are massive groups with a certain political bent that are allowed to accept limitless political donations to support activities, parties, or people.

Just like the Miami Heat, political seats can be bought because people do not vote because of what they research. They vote based on commercials or just who has most signs out front of the polling booth. God bless America. Back to Colbert, the press release said:

To celebrate, Colbert informed the nation:

“I never intended to be an educator. What’s next: Getting paid like one?

I let you down, Nation. Clearly, I must work harder, at informing you less.”

And therein lies the rub for national network news: They work so much harder and have so much less of an effect. Now that’s news!