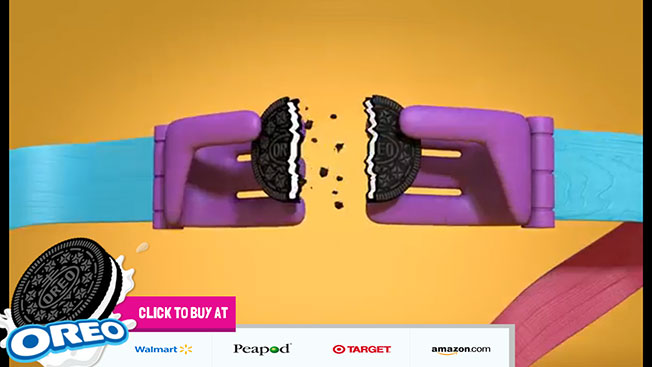 Mondelez International—the makers of Oreo cookies, Cadbury chocolate and Trident gum, among other treats—quietly started becoming an e-commerce brand with a a small test in Europe earlier this year. Now, Mondelez plans to convert all its digital media in 25 countries into shoppable ads with "buy now" buttons to drive sales through retailers like Walmart and Amazon.

The goal is to double Mondelez's online revenue over the next couple of years, particularly on social media where millennials are spending a substantial amount of time.

Despite the hefty, multiyear investment, consumer-packaged-goods brands like Mondelez have long struggled with e-commerce—90 percent of grocery sales are still made in stores, and some experts question how big a dent the Deerfield, Ill.-based company can make.

"I doubt that anyone at Mondelez or anywhere else thinks it will be groundbreaking or an enormous new revenue strategy, but it shows they're willing to test and learn," said Forrester Research analyst Sucharita Mulpuru. "It doesn't cost much to experiment in this way, and at least they capture some data and insights that could help personalization and marketing efforts later."

Calls to action on Mondelez's video, social and display media prompt people to buy the products being advertised. The ads are geo-targeted to retailers' websites. For example, an ad served in New York might link to online grocery-shopping site Peapod, while a promo viewed in Chicago could direct potential customers to Walmart.com. In both examples, users can buy a snack and have it shipped from a nearby store.

Cindy Chen, Mondelez's global head of e-commerce, acknowledged that CPGs have a hard time with e-commerce but claimed retailers like the buy button because it gives them a bit of free traffic. "The role of our 'buy now' button is really taking the traffic that we have from the brand side to the retailer," Chen said.

By 2020, e-commerce will make up between 3 percent and 10 percent of revenue for CPGs, according to Chen, who said, "What we saw was there are so many people engaging in social media, [so] how do we transition from purely the discovery of brand equity to making a purchase?"

While Mondelez's ads are an intriguing use of social media, Jennifer Polk, an analyst at Gartner, pointed out a bigger opportunity with data. "What Mondelez is able to do is track, to a certain extent, how people engage with this media and where they openly choose to buy," she said.

But, that data can do more than push products off specific stores' shelves.

"This could be a way to lay the foundation for things like product development," Polk explained. "If you know that people have a higher propensity towards Double Stuf Oreos than regular Oreos at a specific time of year based on how they interact on your site, then you're in a much better position to start making decisions on product development, innovation, marketing and how you position your brand."