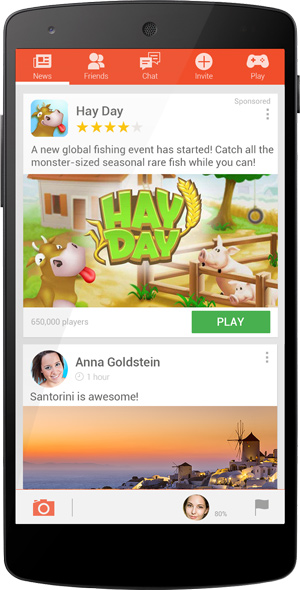 Tango is the latest messaging app to attract big dollars, with Alibaba Group leading a fundraising round of $280 million. The Mountain View, Calif-company is among the growing mobile messaging apps with a strong emphasis on gaming and a user feed that shows native advertising.

The app has 70 million active users. It also has a deal with Twitter’s MoPub mobile exchange to sell advertising such as app-install messages.

It competes with the likes of WhatsApp, WeChat, Line and Kik. WhatsApp, with almost 600 million users, recently sold to Facebook in a deal worth $19 billion. Alibaba Group is the Chinese e-commerce giant in which Yahoo is a major investor. Yahoo’s co-founder Jerry Yang, who is no longer officially attached to the company, was an early investor in Tango.

Since its founding in 2009, the company raised $87 million. It offers mobile activities like messaging, gaming and music. In December, it partnered with Spotify, the music streaming service.

Alibaba is set to sell its stock publicly in an offering that could rival Facebook’s $16 billion raised on Wall Street in 2012. Alibaba contributed $215 million in Tango’s fundraising round. Early investors participated as well, including Draper Fisher Jurvetson, Access Industries and Qualcomm Ventures.