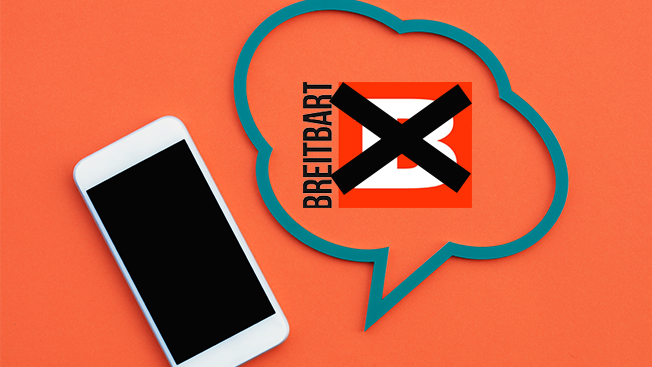 While Google and Facebook are focusing on cutting off ads to websites peddling fake news, one major ad-tech company is focusing on a different problem—hate speech.

Bloomberg News first reported that advertising management software company AppNexus conducted an audit of Breitbart News and determined that content on the conservative website incited violence, which is a breach of the company's policy. Because it categorizes such language as hate speech, AppNexus is therefore denying Breitbart access to its advertising marketplace until it falls back into compliance.

"We did a human audit of Breitbart and determined there were enough articles and headlines that cross that line, using either coded or overt language," AppNexus spokesman Joshua Zeitz told Bloomberg.

Breitbart has been characterized for being one of the online destinations most preferred by members of the alt-right, which has been widely associated with anti-Semitic and white-supremacist views. Zeitz told Adweek Tuesday evening the decision was not about the outlet’s conservative-leaning content, but rather because of the type of hate speech that appears on the site. AppNexus also bans ads to websites that have pirated content or pornography, or large amounts of nonhuman traffic. Zeitz said AppNexus is open to working with Breitbart to make sure it's compliant with the company's policies.

"Until that domain is back in compliance with our quality rules, it can't be made for sale in our marketplace," Zeitz said.

It's unclear how much revenue Breitbart News might lose from AppNexus' decision since it doesn't directly serve ads to the website. However, if other ad-tech companies follow suit, the blockade could force Breitbart to look for other sources of revenue.