From Boardroom to Living Room: How Facebook’s Many PR Initiatives Intertwine to Deliver Its Messaging 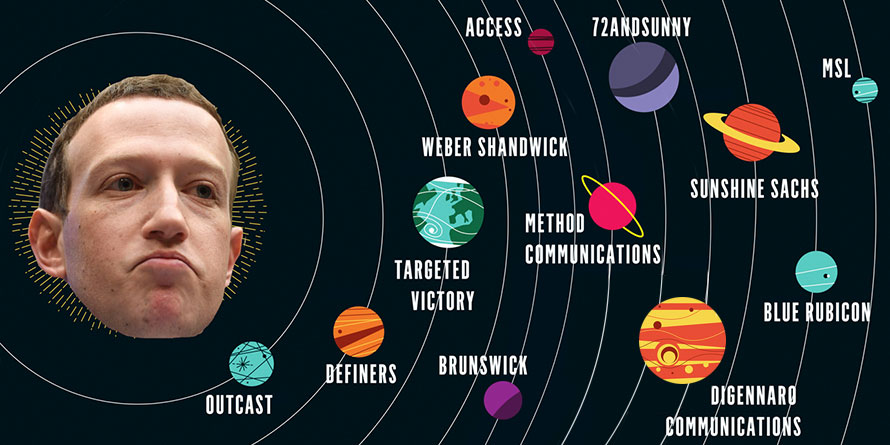 As big as Facebook is—33,606 employees as of Sept. 30, according to its third-quarter-2018 financial results—it’s not making these announcements and dealing with the fallout from past bad decisions on its own. It takes a village.

Messages don’t happen in a vacuum. Companies have communications teams, both internal and external, to help shape and distribute those messages. Often, outside public relations agencies are used to pitch stories to the media, from product rollouts to personnel announcements to crisis management.

When the Cambridge Analytica scandal about the misuse of people’s personal data began dominating the news, the response that was “crafted” by CEO Mark Zuckerberg, likely with the help of media relations experts both inside Facebook and from agencies, was an apologetic tone and stressing the need to do a better job.

And it worked. Versions of that terminology made it onto news outlets including USA Today, CNN, CNBC, Financial Times, Fortune, Wired, Recode, The Verge, Mashable, Gizmodo, Engadget, The Washington Times and, yes, Adweek.

Many large companies will hire several PR shops for different tasks. Some do media relations, trying to curry favor with reporters. Some do “thought leadership,” getting their clients speaking engagements or bylines in publications. Others focus on helping brands navigate internal communications challenges.

Facebook, the behemoth that it is, has at least one-dozen PR firms helping its 300-person internal communications team create and propagate messaging.

Companies will use different firms for different projects. There could be an agency that focuses on the advertising trade media press and another that focuses on national or political press. And these services are not cheap. An agency can charge thousands to hundreds of thousands of dollars per month for retainer-based services as well as hundreds to thousands for one-off projects.

Facebook, the behemoth that it is, has at least one-dozen PR firms helping its 300-person internal communications team create and propagate messaging. Indeed, the company has an agency in every country where it has a presence, according to sources with knowledge. These sources say agencies are paid between $10,000 and $100,000 per month, putting back-of-the-envelope math at anywhere from $120,000 to more than $1.2 million per year on communications agencies alone.

“While Facebook has a publicly recognized agency of record, there might be other projects Facebook wants to execute that are both discrete and discreet,” said Curtis Sparrer, principal at boutique tech PR firm Bospar. “Having a separate agency that is not publicly or closely associated with them would be the best answer, especially if they are practicing the dark arts of PR.”

Those dark arts surfaced in 2011 when employees of PR giant Burson-Marsteller tried to push high-profile news outlets including USA Today and The Washington Post to write negative stories about Google. A spokesman for the agency told The Guardian at the time that the assignment ran afoul of its policies and should have been declined, and the relationship between Facebook and Burson-Marsteller was terminated.

Of the dozen PR firms Facebook uses, The OutCast Agency, which did not comment for this story, has been Facebook’s unofficial main agency. For roughly a decade, the company has helped push Facebook’s announcements on topics including new products and features (for both consumers and businesses), updates, events, engagement-related data and success stories from brands.