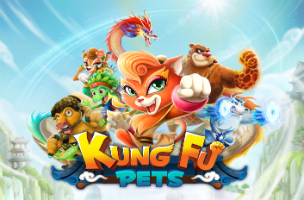 Mobile developer and publisher Com2uS has announced the global launch of its pet simulation and breeding title, Kung Fu Pets, on iOS and Android devices. The game encourages players to collect, raise and train over 100 critters, before eventually taking them into battle against other real players.

In Kung Fu Pets, players are taken to the land of Xiaolin, 1,000 years after a war that sent the Kung Fu Pets into a great sleep. Players are led by Grandmaster Chen, and must work to wake these pets and train them into kung fu masters. To start, players purchase pets from the store and place them into habitats matching their particular elements, like earth and forest. Later, they combine pets to receive new varieties.

Players build a bistro to create food for the pets to eat, and can feed these pets to level them up. Once players hit certain level thresholds, they evolve into stronger pets. These pets can be taken into battle against other real-world players in the arena.

Arena battles are turn-based, and see players choosing one attack per turn to damage the enemy, while also keeping in mind a pet’s element and its relationship to other elements (think “rock, paper, scissors”). If players win these battles, they earn overall league points, which fill a meter at the bottom of the screen. When players have filled the meter, they receive prizes like free premium currency.

Back at the village, players can combine pets at the summoning altar to receive new pets. This isn’t technically isn’t breeding, but serves the same purpose. Summoning pets takes time, and the resulting pet takes time to “hatch,” but players can speed up most tasks within the game with premium currency. Real money can also be spent on purchasing premium pets from the store (rather than unlocking them through summoning, for instance).

Gamers are led through the experience via a quest system, and will receive prizes each time they unlock a new kind of pet for their collection. These quests can be completed in any order, so players can grow their village with relative freedom.

For additional social play, players can login with Facebook and hire their friends in a cafe to receive rewards. Players can also visit their friends’ villages and tap on their buildings to help them out.

Kung Fu Pets is available to download for free on the iTunes App Store and Google Play. In celebration of the game’s launch, Com2uS is holding an in-game release event, rewarding players with limited edition prizes from now until November 19.